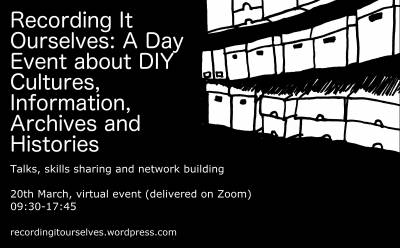 Archive it Ourselves: A Day Symposium Exploring Intersections of DIY Cultures and Archiving/Heritage. This event is a day long symposium exploring the intersections of DIY cultural production (DIY music venues and autonomous spaces; zine making and self-publishing; blogging; podcasting) and archives/information/heritage practices. Recent collaboration between heritage organisations and zine makers and DIY cultures includes the acquisition of significant countercultural collections by libraries and museums (for examples, the Riot Grrrl Collection by Fales Library) collaborations between zine fair organisers and heritage organisations (North West Zine Fest and the People’s History Museum; Weirdo Zine Fest and the National Trust and Science Gallery London), and the establishment of community-led initiatives including the Manchester Digital Music Archive, Salford Zine Library, Queer Zine Archive Project and Birmingham Music Archive. The mobilisation of these networks and communities to capture and collect the heritage of DIY cultures highlights an ongoing need for what Jenna Brager and Jami Sailor refer to as “an intervention by underground cultural producers in the academic project of archiving and “academising” the subcultural practices in which we participate” (Sailor, 2010: p. 1). This also aligns with the aims of the Association of Critical Heritage Studies’ manifesto, which calls for practitioners and researchers to “critically engage with the proposition that heritage studies needs to be rebuilt from the ground up, which requires the ‘ruthless criticism of everything existing’” (Association of Critical Heritage Studies, 2012: online).

This interdisciplinary event will draw together researchers, cultural producers and practitioners to collectively explore the politics, practices and methodologies underpinning these projects. Collectively we will explore the following key questions:
•    What methods do DIY cultural producers and organiser utilise to document and record their collective histories?
•    How are archives of DIY cultures created, managed, preserved, described and accessed?
•    What does a DIY model of archival practice look like?
•    How can DIY communities be supported to document and archive their own histories?
•    How does social media and digital record creation affect or change record keeping practices in DIY cultures?
Links 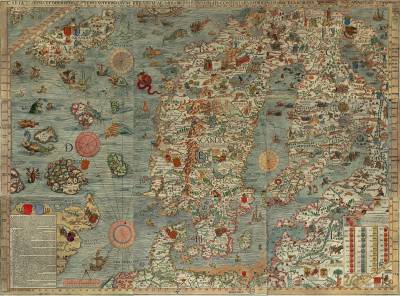 Bringing together researchers from several disciplines (such as Anthropology, Area Studies, Linguistics, Sociology and Visual Culture), UK-Nordic Mobility will explore how mobility has affected the identities of the UK and the Nordic region from the nineteenth century onwards.  The project is based on an international and interdisciplinary collaboration between humanists (Scandinavian Studies at UCL and Edinburgh), and social scientists (UCL SEESS, UCL Critical Heritage Studies, the School of Global Studies at the University of Gothenburg, the University of Eastern Finland).
Rooted in the belief (supported by recent trends in Migration Studies) that all types of migration should be examined, including those between what today might be regarded as ‘privileged’ regions, the project aims to focus on the migrant communities (particularly as represented by local multicultural heritage groups and institutions), the movement of objects, texts, ideas and images and the multilingual environment triggered by these flows. By studying these movements both from a historical and contemporary perspective, we will contribute to the understanding of migration, integration and heritage, ultimately favou¬ring the creation of plural societies at a time when mobility is challenged by the consequences of the UK referendum on EU membership.
Through a symposium (which will take place at UCL on 18-19 MArch 2021) we wish to encourage collaboration between four main groups: the academy, heritage communities, businesses and non-academic audiences (both the migrant communities at the centre of the project and the wider societies of which they are part). In connection with the symposium, we will organise a pop-up exhibition in the UCL Art Museum featuring materials that are part of the cultural heritage of UK-Nordic migration. Ultimately the aim of the planned activities is that of setting up the UK-Nordic Mobility Network, a consortium of universities and organisations in the UK and Nordic countries mapping the movements of people, ideas and texts between the UK and the Nordic countries and reflecting on the construction and preservation of individual, national and multinational identities in these regions.