Recent work within the Cosmoparticle Initiative has proposed a new gravitational-wave detection method, based on tracking the orbital motion of the Moon. This will open up a completely uncharted range of​ frequencies in the gravitational-wave spectrum 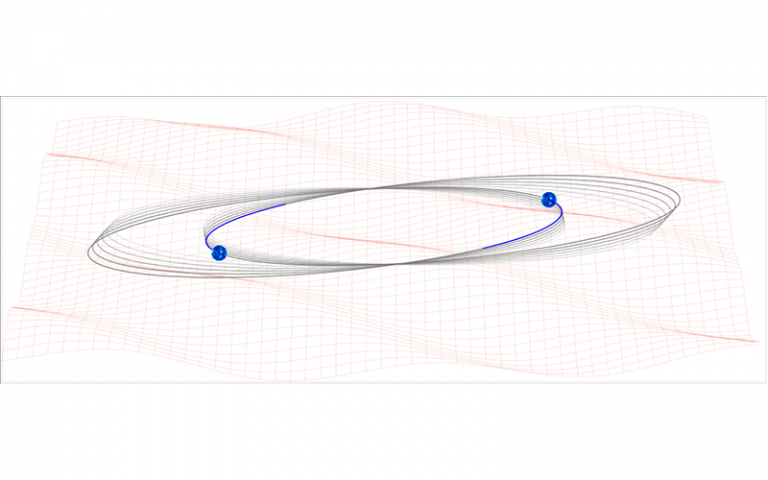 Current measurements by experiments like LIGO and Virgo are sensitive only to gravitational waves with periods between a second and a millisecond, which means they can only observe sources which emit waves with these periods, such as merging pairs of black holes or neutron stars.Other method do exist, including pulsar timing arrays like NANOGrav that are sensitive to gravitational waves with periods of years to decades. But so far none of these methods have been able to look in the “micro-Hertz gap” of waves with week-long periods.

In two recently-published papers, Cosmoparticle postdoc Alex Jenkins and collaborator Diego Blas have shown that we can bridge this gap by looking at how gravitational waves influence the orbits of binary systems. In particular, since the Moon’s orbit around the Earth has a period of roughly four weeks, this provides a perfect opportunity to detect gravitational waves with similar periods. In the second of their two papers (published in Physical Review Letters), Jenkins and Blas show that highly sensitive gravitational-wave searches can be carried out using Lunar laser ranging, in which laser pulses fired at reflectors on the Moon are routinely used to measure the size of the Moon’s orbit with millimetre precision.

The hope is that these searches could discover exciting and unexpected new sources of gravitational waves, much like how the advent of radio astronomy in the mid-20th century lead to the surprise discovery of objects such as pulsars and quasars. Jenkins and Blas also show that their methods could shed light on a mysterious signal recently detected at longer wave periods by NANOGrav, whose origin is currently unknown.

A popular summary of the work, published in Physics magazine

A popular summary of the recent NANOGrav detection