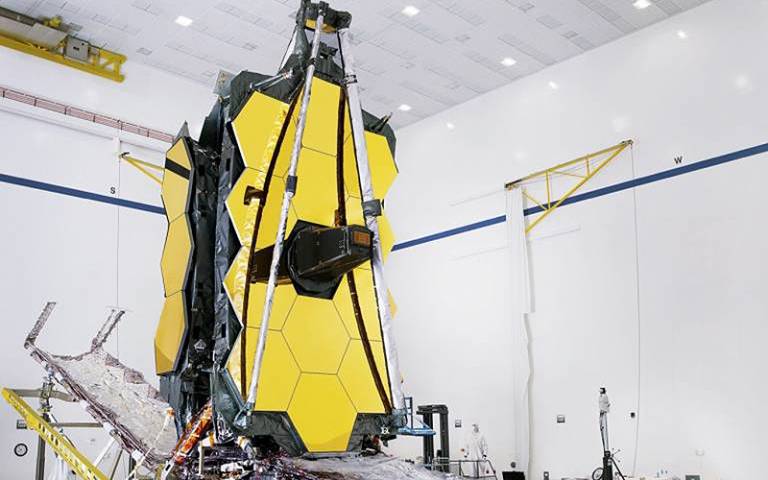 The James Webb Space Telescope (JWST) will be a large infrared telescope with a 6.5-metre primary mirror. After decades of development, the telescope will be launched on an Ariane 5 rocket from French Guiana in 2021.

The Webb telescope will be the premier observatory of the next ten years, serving thousands of astronomers worldwide. It will study every phase in the history of our Universe, ranging from the first luminous glows after the Big Bang, to the formation of solar systems capable of supporting life on planets like Earth, to the evolution of our own Solar System.

Q. You have a close association with the JWST. How did the concept and construction of the telescope come about?

It’s an impressive measure of the degree of ambition in the US scientific enterprise that, no sooner than the Hubble Space Telescope (HST) was launched in 1990 and its performance restored in 1993,  AURA (the Association for Universities for Research in Astronomy ) established a HST and Beyond Committee, with support from NASA and the Space Telescope Science Institute, to “study possible missions and programs for ultraviolet, optical and infrared astronomy in space for the first decades of the twenty first century.” From 1994 to 1996, I served as the only European on this 18-member committee chaired by Alan Dressler (Carnegie Observatories) which recommended the construction of a Next Generation Space Telescope (NGST). This was a formative experience for me, working with many of the most distinguished US astronomers, to define a science vision for the next 30 years. NGST became the James Webb Space Telescope (JWST) and, as was the case for HST, it has had a tumultuous construction path with technical challenges, funding controversies and associated delays. But, thankfully, this impressive space telescope is now ready for launch later this year.

Q. Can you say why the JSWT is so important to astronomy? What big questions do you hope the telescope will answer?

Our report focused on two major scientific questions which, I like to think, have remained at the forefront even though we formulated them over 25 years ago. The first is the study of exoplanets around nearby stars. Although I don’t work in this particular field, it’s a major strength of our UCL department [see, for example, the research interests of Cosmoparticle Core member Ingo Waldmann]. The other is the discovery of the earliest generation of galaxies that emerged only a few hundred million years after the Big Bang. This is now the basis of my European Research Council (ERC) Advanced Grant entitled “First Light.” Both scientific goals led to the requirement for a large aperture telescope (a primary mirror 6.5 metres in diameter representing over seven times the light-gathering power of HST), exquisite angular resolution at near-infrared wavelengths, and access to a faint sky background that is only possible in outer space. However, like any ambitious new scientific facility, JWST will accomplish much more than we imagine today, including many unexpected discoveries.

Q. And, more precisely, what discoveries do you and your team hope to make?

Well, we’ve been waiting for years to get our hands on JWST data. In some sense it’s the culmination of my career given I’ve been continually pushing to higher redshifts (and hence earlier cosmic times) to chart the evolution of galaxies since the late 1970s. When I wrote my ERC proposal to come to UCL in 2014, JWST was expected to fly in 2018. Nonetheless, earlier this year, we were successfully awarded nine proposals amounting to over 200 hours of observations in the first year of operation which begins, hopefully, in spring 2022. The major thrust of our programme is to explore the earliest period of cosmic history, beyond the reach of HST, and to locate “cosmic dawn” when galaxies first emerged from darkness 200-300 million years after the Big Bang. This represents a time when the universe was only 3% of its current age.

Q. What drives you, personally, to work in these areas?

I’ve been fascinated with observational astronomy since I came to UCL as an undergraduate in 1968. The idea of exploring the distant universe to chart the evolution of its contents occurred to me in my third year, working at UCL’s observatory at Mill Hill. I’ve been fortunate to move institutions in my career thereby always maintaining access to the world’s most powerful telescopes essential for studying early galaxies. One advantage of space facilities such as HST and JWST is that access is truly global; anyone can apply for observing time. I hope, following our recent success in getting JWST observing time, our group at UCL can make truly important discoveries. Since we are, ourselves, made from material synthesised in stars, in some sense the quest for the first signs of starlight is a search for our own origins.

Q. Are there other telescopes in the pipeline that you are excited about?

Observational astronomy is now a multi-wavelength, and hence multi-facility, endeavour. Ground-based telescopes will remain crucial and offer important synergies with the capabilities of JWST. At Caltech, and during my time at the European Southern Observatory HQ in Germany, I worked to support a new generation of 30+ metre ground-based telescopes which will come online in the mid 2020s. Our UCL group is also exploiting the Atacama Large Millimetre Array (ALMA) which, we have demonstrated, is very effective at studying the earliest galaxies at millimetre wavelengths where their gaseous components emit important diagnostic information. Overall, it’s a tremendously exciting time to be an astronomer; I just wish I were twenty years younger. I truly envy my students and postdocs who have so much excitement to look forward in the next decade and beyond!