The first clinical trial of novel approach to modifying the progression of Alzheimer's disease has opened in London, led by UCL researchers. 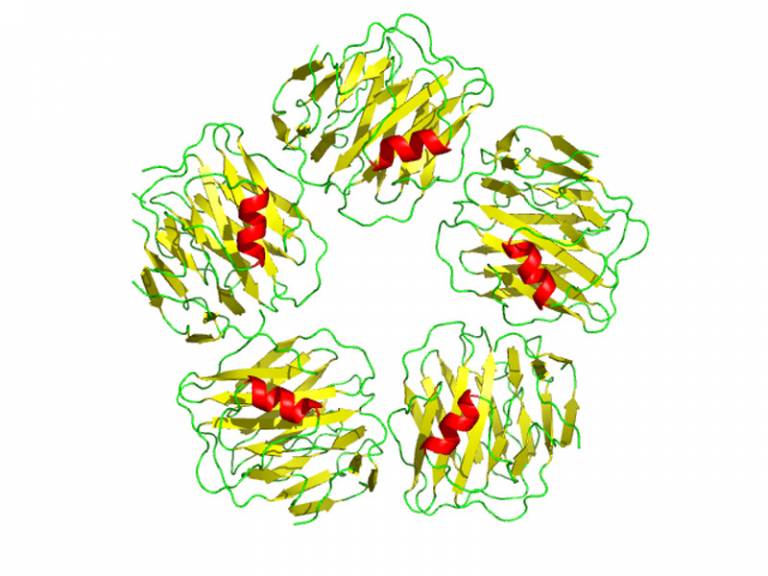 The trial, called DESPIAD, will test whether a drug that removes a protein, called serum amyloid P component, from the brain, is helpful for patients with Alzheimer’s disease.

Alzheimer’s disease is the most common cause of dementia and symptoms include memory loss and difficulties with thinking, problem solving and language. Dementia affects more than 35 million people worldwide – a number that is expected to almost double every 20 years as populations across the developed world age.

Despite multi-billion dollar investments and the commissioning of many large scale clinical trials over the past 20 years, no effective treatments have yet emerged.

“After a long struggle for funding of our different approach to possible treatment of Alzheimer’s disease, it is exciting to finally have started the DESPIAD trial, which has been made possible by the NIHR and the Wolfson Foundation. We now hope it can proceed as swiftly as possible,” said Professor Sir Mark Pepys (UCL Medicine), who led the development of the new drug.

Almost all medications tested have been focussed on the abnormal fibrous protein accumulations, known as amyloid plaques and neurofibrillary tangles, which are always present in the brain in Alzheimer’s disease. The drugs have aimed at removing or preventing the formation of these abnormal deposits.

There is good evidence that the proteins forming the abnormal fibres are closely related to development of the disease but nobody actually knows for sure what directly causes the death and loss of brain cells that leads to dementia.

The laboratory of Professor Pepys has been working on amyloid for more than 40 years. He and his team have focussed on a normal, non-fibrous protein, called serum amyloid P component (SAP), which is always associated with amyloid fibres in the body. They have shown that SAP contributes to the formation of amyloid and its persistence in the tissues.

In addition, SAP itself, unrelated to its role in amyloid, damages brain cells. The brain in Alzheimer’s disease contains more SAP than normal because of the binding of SAP to the plaques and tangles. It is therefore possible that SAP directly causes death of brain cells leading to dementia.

In order to target SAP and prevent its harmful effects, Professor Pepys, Director of the Wolfson Drug Discovery Unit at UCL’s Royal Free Campus, developed a drug, called miridesap, which removes SAP from the blood.

Miridesap has been given to patients with various diseases over the past 18 years, with no significant adverse effects. Because SAP is not made in the brain, removing the protein from the blood with miridesap also removes all the SAP from the brain and from the amyloid deposits in the brain.

The NIHR, via the NIHR Biomedical Research Centre at University College London Hospitals, has lately funded the essential clinical trial required to determine whether miridesap treatment is helpful in patients with Alzheimer’s disease.

The ‘Depletion of serum amyloid P component in Alzheimer’s disease’ trial, known as DESPIAD, is led by Professor Martin Rossor (UCL Queen Square Institute of Neurology), who is also the NIHR National Director for Dementia Research.

“We desperately need new drug targets for Alzheimer’s disease and so this trial, which is a novel approach, needs to be completed as soon as possible,” said Professor Rossor.

DESPIAD is recruiting patients with mild Alzheimer’s disease who will each be treated for one year and tested for changes in brain structure and function. The trial will run for about three years. The study is active and open to recruitment but is limited to 100 participants.

This non-commercial trial is sponsored by UCL and entirely funded by the NIHR; manufacturing assistance is provided by GlaxoSmithKline.

For further information about the trial, contact the DESPIAD team at uclh.despiad@nhs.net.