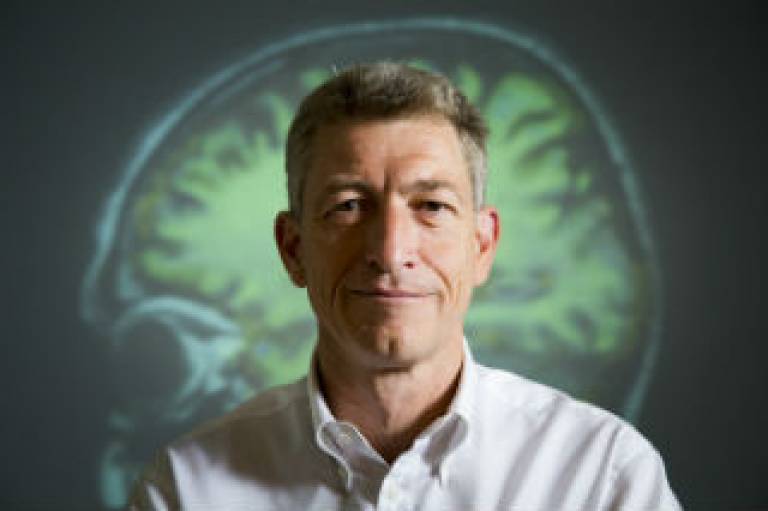 "Even though I see this disease on a professional level every day, I still find the stories heartbreaking," says Nick Fox, Professor of Neurology at the Dementia Research Centre. "I recently diagnosed Alzheimer's disease in a person aged 50. They've got it because they carry the gene - and therefore their three children and their three brothers and sisters all have a 50% risk of developing the disease." It is hard to imagine how painful it must be to receive this diagnosis knowing it will affect not only your own health but that of your entire family - but Professor Fox still has to deliver it.

Fox specialises in early onset dementia, research that is made possible with the support of philanthropists. He emphasises that dementia at any age is devastating. However, those who are at a life stage where they also have to deal with the demands of a job and a young family face a particularly hard journey, as do those whose families carry a gene that makes them more susceptible.

Fox's research is focused on improving the accuracy of early diagnosis. "There is often a misconception that we diagnose 'dementia'. But dementia is a very non-specific term. It's no more specific than saying 'brain failure'. We need to be able to detect whether problems are due to Alzheimer's disease, or frontotemporal dementia, or vascular problems.

"We have to move in the way that cancer research moved 20 years ago - becoming more specific, more precise in what we mean. Only in that way will we be able to tell people what the future holds for them and what will be the most appropriate treatment."

"By tracking progression, we can make trials more efficient," says Fox. "If you are trialling a treatment and you want to see whether there is an effect on somebody's memory, that's a very subjective way of measurement. Memory tests are influenced by mood, or interactions with the examiner, and they don't tell you whether you are shifting the underlying diseases at the brain level. You may just be getting a symptomatic benefit - in the same way that coffee can wake you up but it doesn't do anything about your sleep deficit."

Members of families carrying a known gene are being given treatments before they have symptoms in the hope that the intervention will be more effective - and Fox is now working with the children of families he first met when he started as a PhD student, 23 years ago. His team is also looking for both blood-based and cognitive biomarkers of the disease, to try and understand the full measure of its impact.

Fox is also closely involved with the proposal for a Dementia Research Institute (DRI) at UCL. This will, it is hoped, bring the world's finest minds together to beat the disease. It will have everything it needs to fight one of the biggest medical challenges of the 21st century - from the most up-to-date brain scanners and imaging equipment to cutting-edge laboratories for experimental medicine, and wards for patients who want to help trial the very new therapies that are being developed in those labs. It is expected­­­­­­­ that the first scientific programmes of the DRI will be up and running by 2017.

"We've seen what progress can be made against HIV and certain cancers when we've done research that is fully integrated and properly funded," says Fox. "We're at the stage now where there are lots of exciting developments and we need to transfer those into finding treatments. We are only going to do that if we make a major resource push. It's really exciting that we may be able to pull together researchers who have been scattered around UCL and elsewhere, and bring them together into one concerted effort. That will require a lot of resource but the goal is absolutely worthwhile."

Philanthropy has the potential to make a huge difference to the care and treatment of patients with dementia. For example, UCL's strategic partnership with major supermarkets channels money raised from the 5p charge on plastic bags into dementia research. Fox says this is essential, because: "Dementia is the problem of our age. One-third of people my age will go on to have dementia. Every family will be touched by it one way or another - either by having to care for somebody or by having a partner with dementia. The price of not doing something is too high."

Dementia costs the UK economy more than twice as much as cancer, and three times that of heart disease, every year. Despite this, combined charitable and government investment in dementia research is just £1 for every £12 invested in cancer research.

UCL is Europe's research powerhouse in neuroscience and is ranked second in the world.

For further information about how UCL is meeting the challenge of Dementia you can visit our dedicated dementia website: www.ucl.ac.uk/dementia