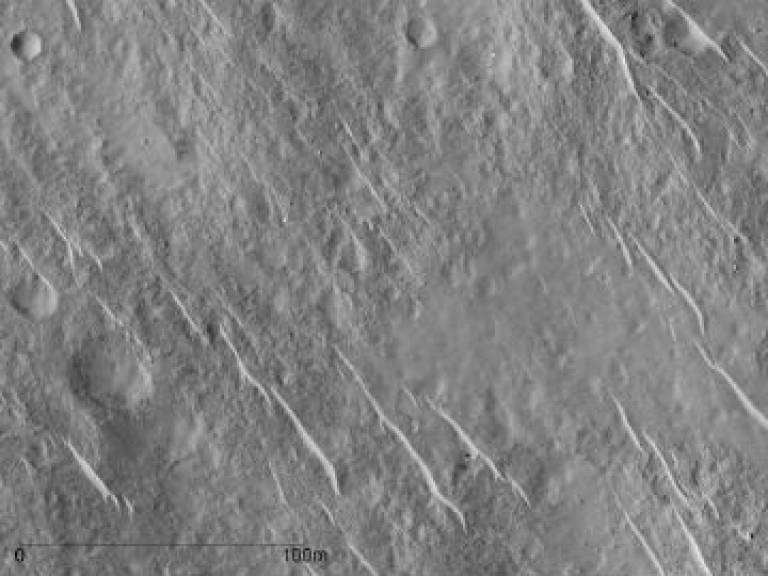 The surface of Mars - including the location of Beagle-2 - has been shown in unprecedented detail by UCL scientists using a revolutionary image stacking and matching technique.

Exciting pictures of the Beagle-2 lander, the ancient lake beds discovered by NASA's Curiosity rover, NASA's MER-A rover tracks and Home Plate's rocks have been released by the UCL researchers who stacked and matched images taken from orbit, to reveal objects at a resolution up to five times greater than previously achieved.

A paper describing the technique, called Super-Resolution Restoration (SRR), was published in Planetary and Space Science in February but has only recently been used to focus on specific objects on Mars. The technique could be used to search for other artefacts from past failed landings as well as identify safe landing locations for future rover missions. It will also allow scientists to explore vastly more terrain than is possible with a single rover.

Co-author Professor Jan-Peter Muller from the UCL Mullard Space Science Laboratory, said: "We now have the equivalent of drone-eye vision anywhere on the surface of Mars where there are enough clear repeat pictures. It allows us to see objects in much sharper focus from orbit than ever before and the picture quality is comparable to that obtained from landers.

"As more pictures are collected, we will see increasing evidence of the kind we have only seen from the three successful rover missions to date. This will be a game-changer and the start of a new era in planetary exploration."

Even with the largest telescopes that can be launched into orbit, the level of detail that can be seen on the surface of planets is limited. This is due to constraints on mass, mainly telescope optics, the communication bandwidth needed to deliver higher resolution images to Earth and the interference from planetary atmospheres. For cameras orbiting Earth and Mars, the resolution limit today is around 25cm (or about 10 inches).

By stacking and matching pictures of the same area taken from different angles, Super-Resolution Restoration (SRR) allows objects as small as 5cm (about 2 inches) to be seen from the same 25cm telescope. For Mars, where the surface usually takes decades to millions of years to change, these images can be captured over a period of ten years and still achieve a high resolution. For Earth, the atmosphere is much more turbulent so images for each stack have to be obtained in a matter of seconds.

The UCL team applied SRR to stacks of between four and eight 25cm images of the Martian surface taken using the NASA HiRISE camera to achieve the 5cm target resolution. These included some of the latest HiRISE images of the Beagle-2 landing area that were kindly provided by Professor John Bridges from the University of Leicester.

"Using novel machine vision methods, information from lower resolution images can be extracted to estimate the best possible true scene. This technique has huge potential to improve our knowledge of a planet's surface from multiple remotely sensed images. In the future, we will be able to recreate rover-scale images anywhere on the surface of Mars and other planets from repeat image stacks" said Mr Yu Tao, Research Associate at UCL and lead author of the paper.

The team's 'super-resolution' zoomed-in image of the Beagle-2 location proposed by Professor Mark Sims and colleagues at the University of Leicester provides strong supporting evidence that this is the site of the lander. The scientists plan on exploring other areas of Mars using the technique to see what else they find.