Process of Brexit: What Comes Next 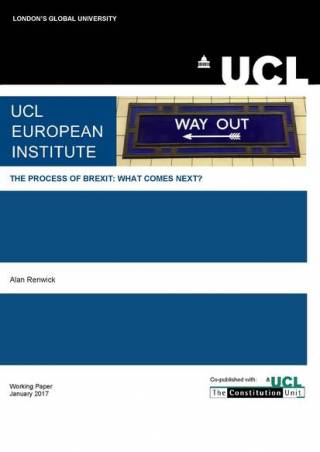 As the process of Brexit moves towards a new phase, it is important to consider what comes next: how the terms of Brexit will be negotiated and agreed, and what roles will be played by the key actors: the executive, legislature, judiciary, devolved administrations, and general public in the UK, and the various parts of the EU.

This report, written by Constitution Unit Deputy Director Dr Alan Renwick and published jointly by the Constitution Unit and the UCL European Institute, sets out what we can say now about how the process of Brexit will unfold.  It begins by providing an overview of the negotiations, including what form any deal might take, whether the time available for reaching a deal might be extended, and whether the UK, if it wants, can revoke the triggering of Article 50.  It then examines the possible roles and behaviours of each of the key actors in turn.  It argues that it will be very difficult for the government to deliver the ambitious package set out by Theresa May in her Lancaster House speech on 17 January 2017 within the two-year timeframe that she envisages.  There are several possible ways in which the Brexit process might instead resolve itself.

Brexit and parliament: treaties beyond the EU

Has parliament just got boring? Five conclusions from the passage of the EU Withdrawal Agreement Act

Election replay with the experts: looking back at the 2019 general election