Brexit: Its Constitutional Consequences for Britain and Europe 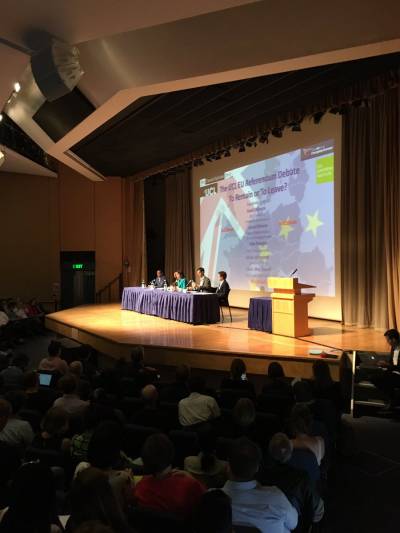 The referendum on 23 June on the UK’s future membership of the European Union raised many important issues. This special seminar series and briefing papers – organised jointly by the UCL Constitution Unit, UCL European Institute, and UCL School of Public Policy – focused on a crucial subset of these issues: the constitutional consequences that Brexit would have for the UK, for the EU, and for other EU member states.

The series concluded with a major debate on all aspects of the Brexit question.

This seminar considered the implications for Whitehall and Westminster both of Brexit itself and of the process of negotiating Brexit. How would Whitehall manage the negotiating process and what would be the role of Westminster? How would the UK's new relationship with the EU be managed post-Brexit? Would Brexit require a re-configuration within Whitehall or Westminster?

How would Brussels manage the negotiation process, constitutionally and politically? What would be the short-term institutional consequences of Brexit for the UK's MEPs, the 2017 UK Presidency, and voting rights in the Council of Ministers? In the long run, how would Brexit impact on the balance of power between member states in the EU's policy-process?

View the UCL Constitution Unit Briefing Paper 3 - Brexit: Its Consequences for Devolution and the Union

What are the likely effects of Brexit on politics within other member states?  Would Brexit change remaining member states' relationships with the EU?  Would it affect decision-making within member states? We will explore how these issues might play out in a diverse range of member states, including Ireland - the UK's closest neighbour -, long-standing member states such as Germany and the Netherlands, and newer members such as Poland and Romania.

View the UCL Constitution Unit Briefing Paper - Brexit: Its Consequences for other member states
The UCL EU Referendum Debate: To Remain or To Leave?

Following the shocking murder of the MP for Batley and Spen, Jo Cox, campaigning for the EU referendum was suspended on 16 June 2016.  The planned UCL EU Referendum Debate, which had been due to feature leading figures from both campaigns, was therefore changed into a Meet the Experts Q&A.  A panel of academics with expertise in the politics and economics of the EU and the processes around the referendum answered a wide range of questions from audience members.

The event was organised by the UCL Constitution Unit, UCL School of Public Policy, and UCL European Institute.

Could a citizens’ assembly help the Brexit process?

The Constitution Unit blog in 2018: a year in review

Monitor 70 — Brexit: the uncertain road ahead

The EU’s negotiating strategy has worked so far, but it’s playing a risky game

How and when might a second referendum on Brexit come about?

What would be the rules for a second Brexit referendum?

Could Article 50 be extended to allow for a second Brexit referendum?

If there’s a second referendum on Brexit, what question should be put to voters?

Brexit and the territorial constitution: déjà vu all over again?