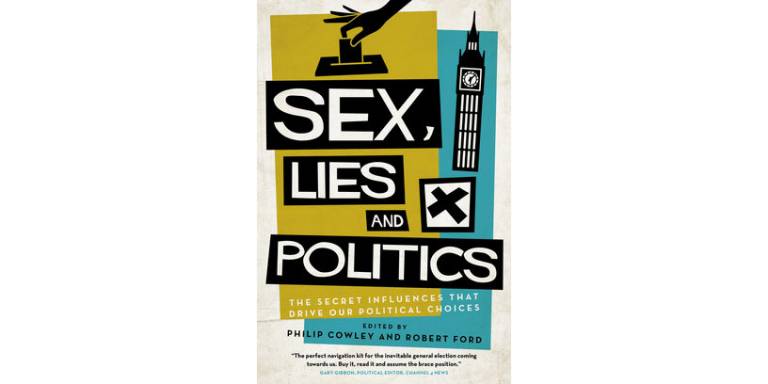 “This book answers everything you want to know about UK politics but were afraid to ask. - Adam Boulton, Sky News

"Written by leading political experts, the book draws on surveys, studies and polls to reveal what makes voters tick, why they do what they do and even what divides them in their private lives. It covers the things that really matter, like how attractive the candidates are, what letters their surnames begin with, when they lie to pollsters, why men in particular make things up, whether Leavers want to live next door to Remainers and how Remainers think they have a better sex life.

At once funny, revealing and shocking, Sex, Lies and Politics covers everything you need to know about British voters: when they lie (and who they lie to), what they care about, who they dislike and what they get up to in the bedroom."

““In politically febrile times, we all need to understand each other better – and have a bloody good laugh, too. These finely crafted essays achieve just that. - Emma Barnett, BBC Radio 5 Live

Contributions from the Constitution Unit

Alan Renwick’s chapter, ‘The Surprise of June 2016: How Public Opinion Changes during Referendum Campaigns’, examines the patterns underlying one of the most consequential miscalculations in British political history. When David Cameron called the Brexit referendum, he expected to win. He did so, though the polls were tight, because he thought that referendum voters normally shift towards the comfort of the status quo as polling day approaches. As we know, he was wrong.

The chapter gathers evidence from the 117 state-wide referendums in stable democracies since 1990 for which sufficient polling data are available. It shows that opinion does indeed move towards the status quo during most campaigns. Indeed, it finds that ‘had the Brexit vote played out like the average referendum with no turnout threshold, Remain would have won by 57.9 to 42.1 per cent’. Yet the 2016 referendum is not alone in having bucked the trend. The chapter identifies two factors explaining such reverse cases: campaigners’ success in portraying the change option as preserving the essence of the status quo; and the emergence of anti-establishment bandwagons.

When people are asked who they trust, politicians come well down the list. Yet, we know that MPs spend a great deal of time responding to the concerns of their constituents to build this relationship. The chapter “Signed, Sealed, Delivered…Testing politicians’ responsiveness to voters” by Rebecca McKee explores what happens when voters contact their MP with a question on registering to vote.

The chapter uses data from an email experiment study conducted in the lead up to the 2015 General Election which shows that despite negative perceptions of MPs’ they are actually very responsive. Some 89 per cent of emails generated a response and almost all of these were helpful. But, the experiment featured two versions of the email, allocated at random. These were identical except for the name. One was chosen to suggest that the writer was White British. The other was chosen to suggest a Black African constituent.

The black African constituent got a worse response overall, both quantitatively and qualitatively.  It’s a good news story with a bad news twist.

You can read a write up of this chapter by Paul Waugh in the Huffington Post here.

““If you don’t read this brilliant book, you are at risk of two things: firstly, not understanding how British politics really works, and secondly, thinking psephology is boring. Tuck in!”  Isabel Hardman

If you’d like to read the chapters in full the book is available to purchase here from Biteback.

"Sex, Lies and Politics" is written by a collection of authors and edited by:

Philip Cowley - a Professor of Politics at Queen Mary University of London. His books include volumes on each of the last three elections.

Robert Ford - a Professor of Political Science at the University of Manchester. His books include Revolt on the Right: Explaining Support for the Radical Right in Britain and the forthcoming Brexitland.