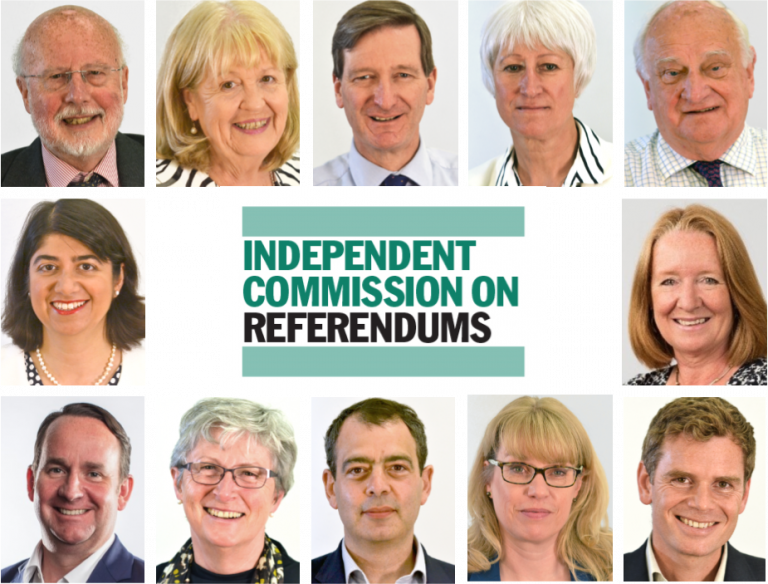 The referendum process in the UK requires wholesale reform according to a report published today by the Independent Commission on Referendums.

Since 2000 five referendums have been held (beyond local referendums), in the UK as a whole, Scotland, Wales and the North East of England. In light of this experience, the Commission was set up by the Constitution Unit to review the role of referendums in British democracy and consider how the rules and practice could be improved. It comprises 12 distinguished members from across the political spectrum including former cabinet ministers, parliamentarians, senior media figures, and experts in democracy and elections.

Drawing on research carried out at the Constitution Unit, written evidence from a range of individuals and groups, and public seminars held in Belfast, Cardiff, Edinburgh and London, this report represents the most comprehensive review of referendums in over 20 years.

The detailed report sets out almost 70 conclusions and recommendations as to how referendums could best function in the future, all of which have been agreed unanimously.

Embedding referendums in the process of democratic decision-making

Ensuring fairness in campaigns and improving transparency and accountability of campaigners

Empowering voters to be confident in their decisions

"It is clear that referendums have become a key part of the democratic process - but a lot has changed over the past 20 years. The rules governing the role and conduct of referendums are outdated, not least because of the rise of the internet and social media. Our recommendations stem from three core points: first that referendums are best seen as co-existing alongside, rather than replacing, representative institutions; second, that they should be conducted in a way that is fair between the competing sides and effective in giving voters the information they want; and third, that the rules should keep up with rapid changes in online campaigning."

There will be a seminar at 5.00PM on Wednesday 11 July at the Constitution Unit, 29-31 Tavistock Square, London WC1, at which the Commission's Chair, its Research Director and several of its members will discuss the recommendations and how they were reached, and consider what can be done to take the proposals forward.