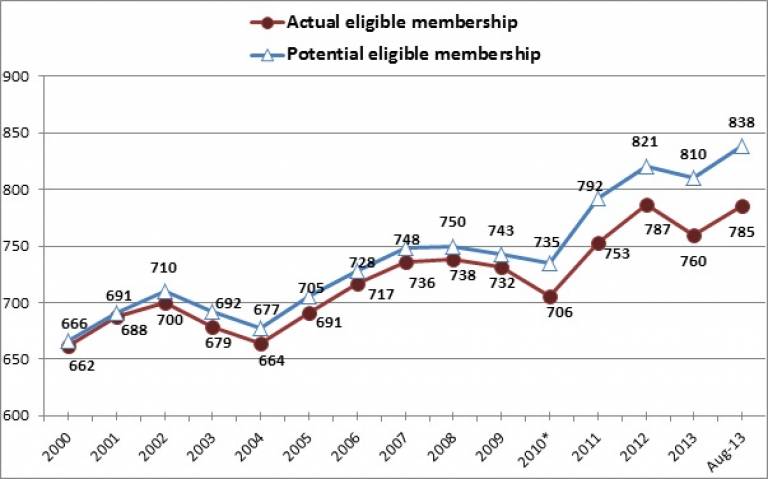 The appointments (14 Conservative, 10 Liberal Democrat, 5 Labour and 1 Green) take the eligible membership of the Lords to 785, but with 53 peers temporarily disqualified or on leave of absence, the potential membership of the chamber has reached 838. This is a new post-1999 high, and 172 members larger than 13 years ago - as shown in the chart below.

Commenting on today's appointments, Meg Russell said: 'Until some formal regulation of appointments to the House of Lords is introduced, the size of the chamber will grow and grow. Each Prime Minister seeks to boost their own side, and counteract appointments by their predecessors. But as appointments are for life, this means people arriving in the chamber in far greater numbers than they depart it'.

Options for regulation (as set out by Dr Russell recently in evidence to the House of Commons Political and Constitutional Reform Committee, and in a high profile report published in 2011 following Cameron's early appointments) include:

Meg Russell commented 'Something must be done, as the current system of appointments is unsustainable. It also gives huge patronage power to the Prime Minister. It is urgent to agree a maximum size for the chamber, and the appropriate formula for sharing out appointments, and to have an independent body to police this. Until then, the Lords will continually rise in both size and cost'.