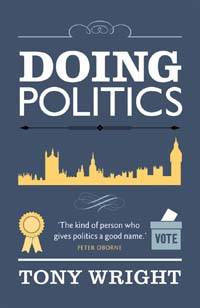 As a Member of Parliament for nearly two decades he represented the voice of sanity and reason in the House of Commons. As Chair of the influential Public Administration Committee - according to Anthony King, one of those rare committee chairmen who 'have become public figures in their own right' - he kept up a running commentary on the conduct of government. He was the politician who forewarned of the parliamentary expenses scandal and who took the initiative in getting the House of Commons to reform.

Doing Politics combines a personal account of Tony Wright's own political experience, which stretches back to the immediate post-war world in which he grew up, with reflections on politics today. Through a selection of articles on a wide range of political issues, it illustrates his belief in the indispensable value of politics, but profound dissatisfaction with the way its business is usually conducted.

"This is a book to be savoured... Tony Wright is firmly up there with the ace political observers like Walter Bagehot, R.H. Tawney and George Orwell."

"That is the triumph of a parliamentarian such as Wright: he helped to strengthen those parts of the constitution that made life difficult or irritating for people in power."

A Labour Member of Parliament between 1992 and 2010, TONY WRIGHT is now Visiting Professor in Government and Public Policy at University College London and Professorial Fellow in Politics at Birkbeck College. His previous books include British Politics: A Very Short Introduction.