What is the role of the monarchy? 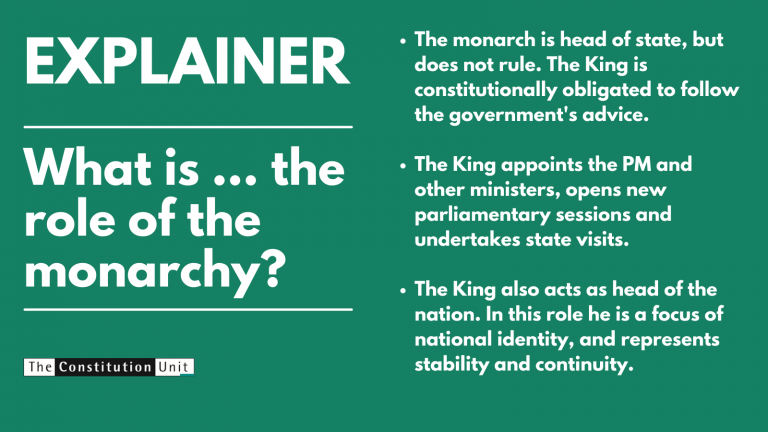 The monarch is head of state

The Queen reigns, but she does not rule. Ruling is done by her government, and as head of state in the UK the Queen is constitutionally obliged to follow the government’s advice. Her main functions as head of state are to appoint the Prime Minister, and all the other ministers; to open new sessions of parliament; and to give royal assent to bills passed by parliament, signifying that they have become law.

The Queen also chairs monthly meetings of the Privy Council, to approve Orders in Council; she receives incoming and outgoing ambassadors; she makes a host of other appointments, such as the senior judges, but in all this she acts on the advice of the government. She has a weekly audience with the Prime Minister, and receives daily boxes of state papers for her signature, and for information. She also has regular meetings with senior officials of all kinds.

The monarch is also head of the nation

To the public the Queen is more visible in her wider role as head of the nation. In this representative role the Sovereign acts as a focus for national identity, unity and pride; gives a sense of stability and continuity; officially recognises success and excellence; and supports the ideal of voluntary service. The Queen fulfils this role through speeches such as her address to the nation at the start of the Covid pandemic, and annual broadcast on Christmas day; through giving honours to recognise public and voluntary service; and through visits to the armed forces, schools, hospitals, charities and local organisations.

The Queen carried out just under 300 public engagements in 2019, but in total 15 members of the royal family carried out 3,567 such engagements. These include national occasions such as attending the Cenotaph for Remembrance Day, or the Trooping The Colour; but the majority are visits to all parts of the UK, to recognise and support the work of local public services and voluntary organisations. The Queen and other members of the royal family are patrons of over 1000 charities and organisations in the UK and the Commonwealth.

The Commonwealth and the Realms

The Queen is also head of state of 14 other countries around the world, known as the realms: they include Australia, Canada, Jamaica and New Zealand. And the Queen is Head of the Commonwealth, a voluntary association of 54 states, mainly former British colonies and dependencies.