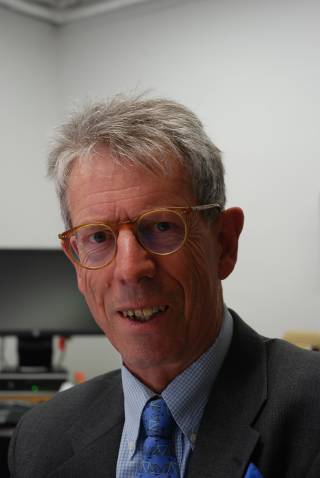 Robert Hazell is now semi-retired, and no longer does any teaching or PhD supervision, in order to focus solely on research. He was a late comer to academia, coming to UCL in 1995 at the age of 45. After degrees from Oxford in PPE and Law, he started his career as a barrister from 1973-75. He then joined the Home Office, and was a policy making civil servant from 1975 to 1989, working in immigration, police, prisons, broadcasting, race relations, drugs and criminal justice policy. He left Whitehall to become Director of the Nuffield Foundation for six years, and then left the Nuffield to found the Constitution Unit at UCL in 1995. He was given a personal chair as Professor of Government and the Constitution by UCL in 1999. In 2006 he was awarded the CBE for his services to constitutional reform. In 2009 Robert Hazell was awarded the Political Studies Communication Award for his work in developing and communicating the constitutional reform agenda.

" "Britain's constantly morphing constitutional landscape needs an ace cartographer to make sense of it, and in Robert Hazell it has found one" (Lord Hennessy)

In 2015 Robert Hazell took semi-retirement, to focus more on research. He ceased teaching, and Meg Russell became Director of the Constitution Unit. Robert Hazell said: "Meg Russell is a longstanding colleague, and I have always been immensely proud of her and her work. So I am delighted that she has taken on the directorship of the Unit. She sets the highest possible standards, and under her leadership the Unit will go from strength to strength. I shall be pleased and proud to be working under her".

Robert's research interests cover the whole of the constitutional reform agenda. He has written widely on devolution in Scotland, Wales and the English regions; freedom of information; parliamentary reform and Lords reform; a British bill of rights; referendums; electoral reform; the Crown and royal prerogative; constitutional watchdogs; and the process of constitutional reform. He is a great believer in collaborative research and likes to build research teams around projects, and to write multi-authored books rather than monographs.

He was director of the 1999-2005 Leverhulme funded research programme into the Dynamics of Devolution, which had 12 projects and 25 partners. He continued with some of the same partners to direct an ESRC and government funded project monitoring the latest developments in devolution (2006-2008). His last collaborative venture with 20 partners was forecasting the shape of the constitution in 2020, published as Constitutional Futures Revisited. Following the introduction of freedom of information in 2005, he studied the impact of Freedom of Information on Whitehall (ESRC 2007-2009), and on local government (ESRC 2009-2011), and on Parliament (Leverhulme 2009-2011).

In anticipation of the 2010 election, Robert led a project in 2009 on Multi-Party Government, and then a study of the new coalition government (2011), and of Special Advisers (2012). From 2011 to 2014 he led a big collaborative research project into the Politics of Judicial Independence. His latest research projects involve work on the Monarchy (the Accession and Coronation oaths, and a comparative study of European monarchies); on Pre-Appointment Scrutiny hearings by departmental Select Committees; and the role of Non-Executive Directors on Whitehall boards.

Robert has remained close to Whitehall, and continues to advise the civil service and the political parties on constitutional reform matters. He has served on four different government advisory bodies on freedom of information, and three times acted as Special Adviser to parliamentary committees. He has given evidence to numerous official bodies and parliamentary committees, and done consultancy for the House of Commons, House of Lords, Cabinet Office, Ministry of Justice, Information Commissioner, Scottish Parliament and World Bank.

The main policy changes which he has helped to influence include:

Robert has written articles for all the main national newspapers, and is a regular contributor to Prospect. He has given frequent interviews for BBC Radio 4 (Today, World Tonight, World at One, Week at Westminster) and BBC TV (News at Ten, Newsnight) and ITN (C4 News), as well as overseas broadcasters (ABC, CBC, CNN, Sky etc).

In 2009 he was awarded the Political Studies Association's Communication Award for 'consistently working to develop the constitutional reform agenda, to communicate these ideas to government and more generally to inject academic rigour and principle into public debate'.

Robert Hazell is semi-retired, and no longer supervises PhD students, or does any teaching.  From 2006 to 2013 he was Programme Director of the Affiliate Programme in Political Studies, which laid the foundations for the Department’s new Undergraduate programme in PPE.

The Platinum Jubilee and future of the monarchy

Partygate and the special advisers’ code of conduct: lessons for the new Downing Street Chief of Staff

FTPA Joint Committee lays down marker for the future

The Fixed-term Parliaments Act: should it be amended or repealed?

The Parliamentary Constituencies Bill: how to ensure a level playing field

Coronavirus: how Europe’s monarchs stepped up as their nations faced the crisis