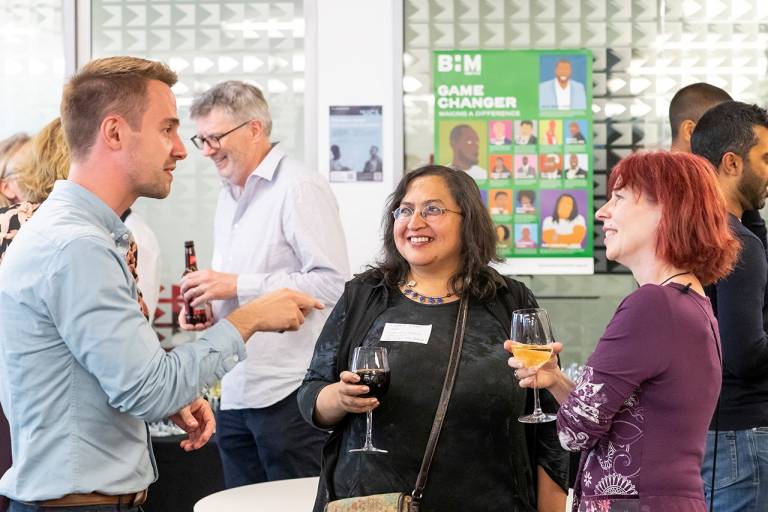 Over 50 former students representing a range of companies and industries came together to make new connections and catch up with some familiar faces from the past.

Attendees also heard the latest news and developments from Head of Department, Professor Steve Hailes, who showcased some of the inspiring and innovative projects which have come out of the department this year. This included UCL MotionInput, a pioneering touchless computing software developed by UCL academic staff and students which allows users to control a computer with facial features and hand gestures.

Other exciting initiatives included the department’s expansion into UCL’s new campus in East London at the Queen Elizabeth Olympic Park. Two new programmes with be launched in 2023 from the Robotics and Autonomous Systems group, including an MEng in Robotics and AI.

Centre for AI Director, Professor David Barber, highlighted the Centre’s major successes since its launch in 2019, including being host to the Centre for Doctoral Training (CDT) in Foundational AI, one of 16 national CDTs funded by the UK Government.

Alumni also learnt how they can get involved with department today, such as mentoring on student projects, speaking at events and other engagement activities with students and industry.

"It was with some trepidation that we launched the recent alumni event – we were convinced of the power of building strong relationships between UCL Computer Science and its alumni but had little idea of the likely level of interest.

I’m so pleased that we took the step: the event was a major success, with more people wishing to come than we could actually accommodate and a great evening had by all who attended.

Given its success, this event will be the first of a regular programme to come – spread the word. The next will be held in another new development for Computer Science –a world class centre of research and teaching in intelligent robotics – that is under construction at the UCL East campus."

“It was great to meet up with students and colleagues from my time in the department and especially to hear how much research and teaching has grown in strength since I retired as Head of Department in 2002. It was good find out that growth is continuing with the new Olympic Park campus, and I look forward to attending an alumni mixer event there in future.”

Please visit our alumni page to find out about future events and opportunities to support the next generation of computer science graduates.