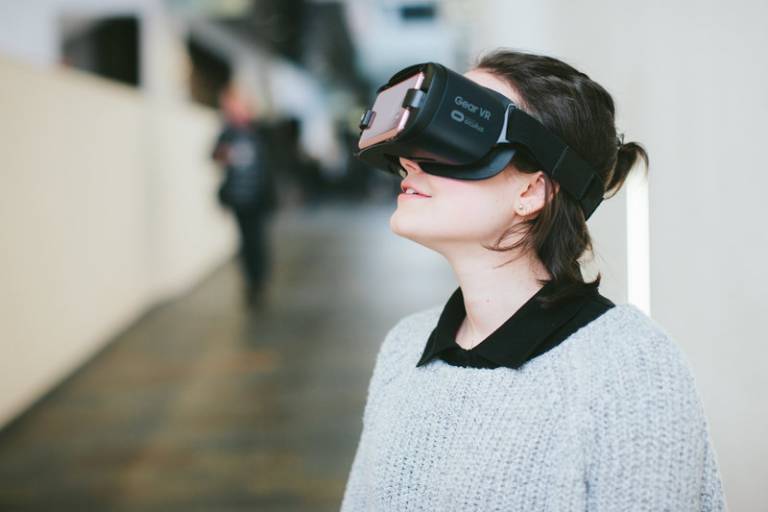 To an at-capacity lecture theatre, Lanier, who was in London to promote his latest book: Dawn of the New Everything: A Journey through Virtual Reality, described how he started as a computer scientist and what it was like in the earliest days of VR. The lecture left off from the content of his book, which he described as “part memoir, part introduction to VR”.

While Lanier was keen to emphasise his ambitions towards a utopic vision when he started thinking about VR, he also emphasised the capacity that exists within the medium for terror, and how VR could be used in awful ways. For this reason, he structured his talk as a “thesis, antithesis, and synthesis”: putting forward his initial dream-like impetus for thinking about VR, the problematic potential it has for it to go awry, and concluding with a synthesis of his arguments containing some suggestions for how we should move forward.

The initial impetus for VR, Lanier explained, was his dream of a new and more intense form of communication between people. Inspired by surreal art, Hieronymus Bosch and the capacity for limitless new worlds, Lanier strove to replicate the world that exists inside dreams and imaginings – the infinity that cannot currently be shared with other people. As a teenager he latched with fervour onto the first ever virtual reality system called Sketchpad created by early computer scientist Ivan Sutherland. He ended up in Silicon Valley where he founded his own firm, which produced the first commercial head-mounted display, among other VR apparatus.

Lanier is quick to emphasise that his feelings about VR have always been coupled with a feeling for its destructive potential. Though he sees technological progress as a moral necessity, as we go further forward, the risks of us imperilling ourselves also increase.

He explained, “there’s something very seductive about the way we gain new powers when we invent new technologies. The lust to power is the thing that will destroy us. In order for us to survive technological progress we need to have a countervailing force, something else that is even more seductive, that doesn’t destroy us”.

Lanier was an early critic of the way that our algorithm-led web culture is having a hand in the way we respond to politics, and to ourselves. Although these arguments have been gaining traction recently, with significant profiles and statements from tech leads, Lanier’s 2011 book You Are Not A Gadget anticipated these fears. In his talk he was particularly critical of the way that social media users have no insight into the algorithms that are being used, no say in how strategy is managed, or who can pay to influence what we see and how we engage.

When asked by one audience member what politicians should do with respect to social media, Lanier responded simply: “don’t do it”. Lanier was emphatic as to how toxic these interfaces are for all of us, and how they manipulate us without our knowing.

The lecture was hosted by Professor Mel Slater (UCL Computer Science), who said that the moment he first tried on a head-mounted display produced by Lanier’s VR company in 1990 “changed his life”.