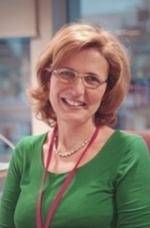 I think I was born into science, and particularly medicine, because my father was a doctor. I was his first child and he expected me to become a doctor too. I did the right A-levels for medicine, even though I was much more interested in languages. But I didn’t get the grades. My degree in the end was in psychology and statistics, so it was very different. And so I never thought of myself as a scientist.

And what happened next?

I spent a few years in California in the early 1980s and AIDS was a really big deal there at the time. I read up everything I could about it, partly because I was fascinated by it, but importantly because I was having a baby in San Francisco in the mid-1980s and blood wasn’t yet being screened.
When I came back to the UK I started work at, what was then the Communicable Disease Surveillance Centre (CDSC) in an AIDS post. I think they were quite surprised about how much I knew about transmission and the virus, so they took me on. I was there for 8 and a half years.

Did you do further study?

I did a part-time MSc in Medical Statistics whilst at CDSC. Then I joined the MRC HIV clinical trials centre at UCL to set-up a study, and registered for a part-time PhD. I think that’s when I properly became a scientist!

And how did your career develop from there?

I stayed on and applied for funding from the European Union to set up a collaboration of HIV seroconverter cohorts. We got the funding and developed the CASCADE Collaboration, now part of EuroCoord. These were the first observational studies in the centre.

Can you tell us about some of your current research?

I have a particular interest in seroconverters (HIV-positive people whose date of infection can be reliably-estimated). Seroconversion is quite a unique time, when we might be able to do something really profound, like eradicating or doing some serious damage to the virus.
Seroconverter data also allow us to examine HIV’s natural history so we can understand more about pathogenesis. We can learn how the disease develops: extent of CD4 decline and viral load evolution, how have they evolve over time, in the individual and over the past 30 or so years since the discovery of the virus. For example, recent results from the CASCADE study strongly suggest that (at least in Europe) HIV has increased in virulence and transmissibility over time, as it has adapted to man.

I’m currently involved in the planning of a new trial, looking at ‘post-treatment control’; people who are given therapy early and then come off it (for whatever reason), but continue to control the virus without treatment. It’s estimated that between 10 and 15% control the virus two years after they stop treatment. We want to understand the mechanisms for this, and try to induce this post-treatment control status in a greater proportion of individuals.

Could you describe what you do day-to-day in your current role?

I seem to read and respond to emails a lot!
My job is to get grants, do studies, and publish findings. Most of my job requires commenting on papers, guiding and contributing to writing research grants, analysis proposals, and reading chapters of students’ thesis.
We also have team meetings to discuss progress of specific projects; how they are going and what bottlenecks there are. Have we got all the samples collected?  Any lab or courier problems to be resolved?

I don’t think you spend so much time writing the papers yourself but to enable others to write those papers, and to have the ideas, and to think about: ‘What is the right question to ask? Why is that question important?’ You need to bring in the background for what there is out there already and ask: ‘How does this fit in? How does it contribute? Ok, so how are we going to do it?’
I also help with interpreting the results. There’s so much data you could drown in it, but a lot of research is really about focussing on the data and keeping the thread of really what’s important here, why it is important, why it is relevant, and how we act on that information now.

Have you experienced barriers in your career, or have there been any times when you have needed extra support?

I cannot think of any barriers that were ever in the way. I’ve been lucky to have worked with many supportive people.
I did the MSc in Medical Statistics part-time as a woman in my 30s, with an 18 month-old and a 6-year old. I was ten years older than most of the other students, and felt like my cogs going really slowly. It was hard work going back to learning but it was also really, really interesting. There’s nothing as motivating as feeling you’re learning something new. I wondered often whether this was for me but really really didn’t want to let people down, and I had an amazing tutor who was really very encouraging and helpful.
When I finished that, I surprised myself ten years later, when I thought: ‘I want to do a PhD’. And that was actually far, far tougher than doing the MSc, because I was also doing a serious research job setting up a big study. Just because you’re doing the PhD on the work doesn’t mean that you’ve hit two birds with one stone. There’s lots of stuff that needs to be done at work that will never go in the PhD, and there’s loads of stuff that’s just PhD, not work. And again, I had two school-age children and often thought just two would be easy but 3 really difficult; a family and a job and the studying.
But I learnt a lot from managing my time. I learnt by having to really be focussed, because what I was doing for my PhD I was applying in the way I was setting up the study and I was being challenged all the time.
So the barriers were just life. I could have decided I didn’t want any of those barriers and just dropped something (well, not the children!) but I’m glad I didn’t. It doesn’t last forever, though at the time – especially near the end of the PhD – you think, ‘Is this ever going to finish?’ But I did it, and I was so glad.
Doing a PhD you learn so much about research and focussing on the questions, so the title you get is just the icing on the cake. You learn all the time: I’m still learning.  I really enjoy research because I’m still learning and, as a result, I can contribute.

What plans do you have for the future?

Working at the Africa Centre in rural Kwa-Zulu Natal for part of my time. It’ll be very, very different from my work in the UK and in Europe, and is a big challenge. I’m really excited and looking forward to it!