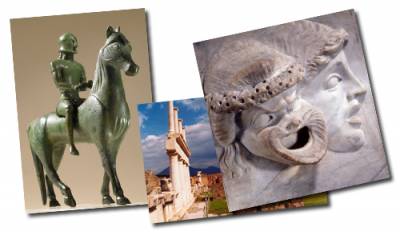 (Classics Q800, Classics with Year Abroad Q801) is focused on the study of Latin and Greek language and literature, and require students to have an A-level or equivalent in one or both ancient languages. Every year, half your study must involve courses in Latin and Greek, though there is a considerable amount of flexibility as regards the other half.

(Ancient World Studies Q805, Ancient World Studies with Study Abroad Q806) are our most flexible degree programmes, providing students with an almost entirely free choice of courses covering classical literature, history and archaeology. Students are not required to have studied Latin or Greek.

These combine study of either Latin or Greek with other areas of study.  Latin is available as part of the Modern Language Plus degree (and can be combined with languages such as French and Spanish). Greek is available as part of the Philosophy with Greek degree.  For these courses students typically take half of their courses with us and the other half with their home department