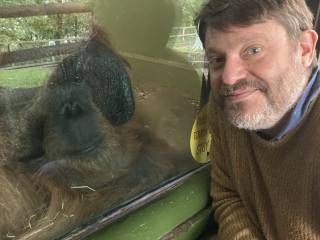 I often give school talks on Greek topics and set texts, particularly Homer and the early lyric poets.  I am also the Department's Ancient World BA tutor.

Teaching summary: At UCL I have lectured on Greek myth and Classics and Literary Theory. I have taught reading classes in Homer, Aristophanes, Sophocles, Euripides, Greek Lyric, Plato, Herodotus and the Homeric Hymns; I have also taught Intermediate Latin and Catullus to undergraduates, and contributed to the Approaches to the Ancient World survey course. At MA level I have run courses in Classical Greek Tragedy, Aristotle's Poetics, and Pindar, and have contributed to courses on Classical Reception. I supervise undergraduate and MA supervisions on a wide variety of topics.

Research supervision: I am interested in supervising research students in Greek literature and culture and their reception, and would be interested in co-supervising with colleagues in other UCL Departments or London universities (KCL, RHUL, the Warburg Institute, and the ICS). I have supervised PhD theses on Menander and Euripides, and have co-supervised theses on Aristophanes and Plato. I am currently co-supervising a thesis on sacrifice and alimentary regimes as ways of distinguishing gods and humans in early Greek myth and thought.

Biography: I completed my MA in Latin and Greek Language and Literature at ELTE in Budapest (I am bilingual in Hungarian and English), before coming to study for the doctorate at UCL. I was a Junior Research Fellow at Christ's College, Cambridge before coming to UCL as a lecturer in 2012.

My thesis, defended in 2011, was entitled Talking Song in Early Greek Poetry: it studies the self-referential language early Greek poets use to reflect on what they are doing, and the social 'song-work' their compositions do.  I am revising it for publication with Cambridge University Press.

My current research interests range widely over early Greek literature from Homer's songs to the early fourth century BC, and I am also interested in literary and aesthetic theory and cultural, intellectual and social history.  I am fascinated by how Greek poets and vase-painters give us access to a world of thought and feeling different from our own.  I am particularly interested in the ways in which Greek poetic texts reflect the thought-world of a 'song-culture'.  Ancient cultures of literacy and orality are an important theme in my work. I am also interested in how the Greeks' myths, poetry and art reflect their view of their societies' local and Panhellenic past, and have published on the topics of memory and collective memory in early Greek culture.  I also have interests in literary and social theory, and in philosophy.

I have organised or co-organised several conferences, including: 1) the London conference on epinician poetry (June, 2006, at UCL/the ICS), with Richard Rawles and Chris Carey: the proceedings were published as Reading the Victory Ode (Cambridge, 2012) and Receiving the Komos (Institute of Classical Studies, 2012); 2) 'Simonides Lyricus' (in Cambridge, 2010), with Lucia Prauscello (proceedings forthcoming as a CCJ supplement in 2020); and 3) 'The Poetry of Greek Philosophy' (with Joshua Billings, UCL/Princeton, 2018).

‘Highlighted Works of Art: Myth in fragments’ (Spring: January-April, 2015) at the Budapest Museum of Fine Arts, Budapest, Hungary (included the writing of a brief catalogue).