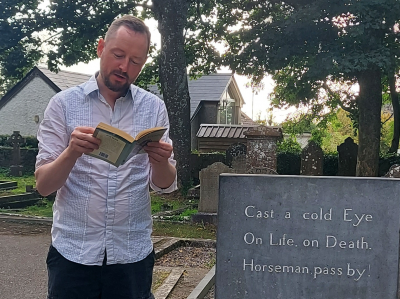 Research interests: Latin literature, especially Augustan poetry; Roman authors' use of the past, including the literary past; Virgil and his reception; Dionysus; Ireland and the Classics.

I am currently co-supervising PhD theses on Dionysus in Rome; the reception of Virgil's Arcadia; and narrative in Euripides' Trojan trilogy. I have recently co-supervised PhD theses on the imperial cult in Augustan poetry; Philodemus and Virgil; the modern reception of Greek tragedy; narrative in Petronius; animals in Valerius Flaccus; and prophecy in the epic tradition.

I completed a BA in Classics at Trinity College Dublin, and masters and doctoral degrees at the University of Oxford.

My research interests range widely over Latin literature and the history of interpretation. I find it fascinating to explore how we use and understand antiquity, sometimes with modern lenses, and sometimes with ancient ones.

I am particularly interested in Dionysus in the ancient world, and in the later reception of the god, and was the historical consultant for a BBC documentary with Bettany Hughes entitled Bacchus Uncovered, which also featured Phiroze Vasunia.

At present I am finishing a book to be entitled Virgil's Dionysus, and several articles on Virgil.

Together with Valentina Arena (UCL History) I organized a colloquium on Varro and antiquarianism in the late Roman Republic. The proceedings were published as Varronian Moments in 2017.

I am very interested in promoting discussion between readers of Classical literature and literature from other cultural contexts. To this end, I co-organized (with Peter Mack) a colloquium on Roman satire and its reception, which took place at the Warburg Institute in October 2014.

I often give school talks on Roman topics and on Latin set texts, especially those by Virgil, Horace, and Ovid. I am also the Department's Undergraduate Admissions Tutor (from September 2020).