28-29 June 2017 in the Department of Greek and Latin, Teaching Fellow Emily Chow-Kambitsch and undergraduate Greek and Latin students Hansy Shore, Abhilash Sivaraman, and Caterina Domeneghini ran UCL's first Living Latin Workshop. This workshop was generously supported by UCL ChangeMakers and UCL Greek and Latin, and offered participants an exploration of various pedagogical methods for approaching Latin as a living language.

This project aimed to provide a foundation for Latin students and enthusiasts across disciplines to cultivate a new mode of connection with their curriculum: an active engagement with Latin language that can foster development of linguistic skills, and can allow for a more nuanced understanding of the language's relationship to aspects of ancient Roman cultural identity. The workshop encouraged students to bridge study of ancient cultures with contemporary cultural experience by communicating their own ideas in Latin, which is usually taught through comparatively passive absorption of set texts for translation into English.

The workshop attracted 20 participants from a variety of backgrounds: academics, students, schoolteachers, and several retirees who had come back to studies in Latin very recently. Motivations for attending the workshop cited on our feedback questionnaire included: 'To improve my level of Latin, and engage more with the language'; 'To see if "Living Latin" can provide more exciting ways of teaching Latin'; and 'I think it is very important to promote active fluency in Latin in order to improve the standards of language knowledge across the board (students & teachers)'. It was a great benefit for us to welcome such a diverse audience, as it allowed us to have rich discussions about conventional Latin teaching methods, and the potential for the growth of immersive initiatives in formal and informal pedagogical settings.

This two-day immersive workshop combined elements of Latin composition and conversation, and discussion in English: evaluating immersive Latin currently used in teaching and research; writing dialogues on varied themes; applying Latin speaking skills to cooperative games; and discussing short passages of Latin literature in Latin. Participants were thus provided with a foundational set of immersive methods for enhancing their grammar and translation skills and enriching their insight into the Roman cultural perspective. 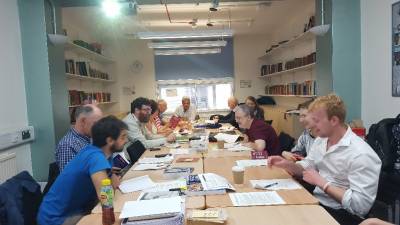 Our Latinists hard at work!

Before we introduced our series of activities in using Latin as a living language, we emphasized that our main objective was not to achieve perfect pronunciation, perfect grammatical constructions, or perfect precision in vocabulary usage. Rather, our goal was to experiment with generating our own ideas and utterances in Latin, and to discuss the pedagogical tools that best aid this process. Indeed, throughout the course of the workshop, participants were eager to speak to the benefits, challenges, and ethics (is it cultural misappropriation? Should we use neologisms and otherwise attempt to discuss modern inventions, cultural phenomena in Latin?) embodied in the active use of Latin today.

The workshop began with the organizers introducing the current state of play and exciting new developments in Living Latin initiatives worldwide. We provided participants with an informational handout on current Latin speaking schools, podcasts, and workshops taking place around the world, and gave some web demonstrations of particularly interesting examples, such as the Quomodo Dicitur? Podcast, whose hosts discuss a range of subjects in academia, current events, and popular culture entirely in Latin! 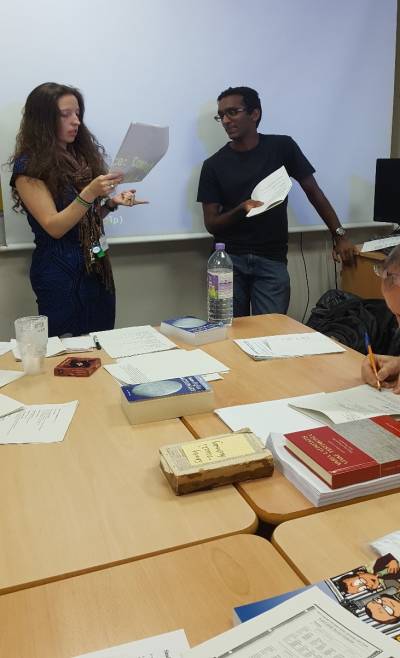 The exercises progressed from pronunciation and recitation exercises to short oral conversation and written composition activities, in order to encourage participants to explore incrementally their skills in active use of Latin. Here is a sampling of some of the activities: 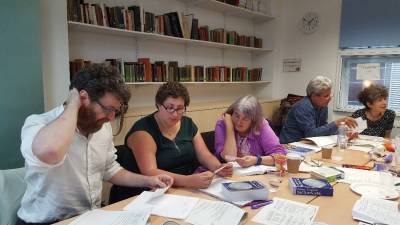 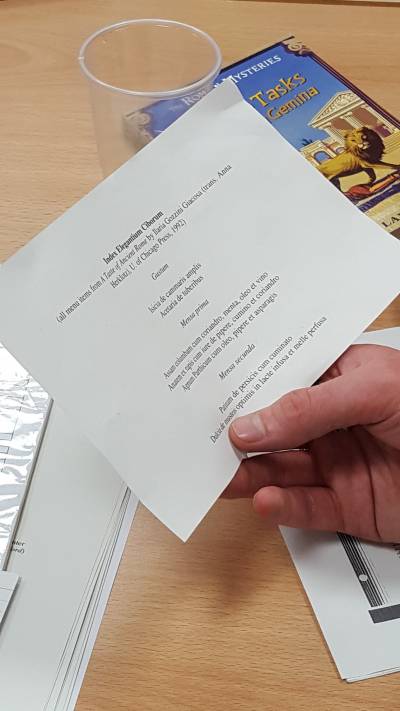 We were very fortunate to have two guest speakers join us throughout the course of the workshop.

Dr. Pauline Souleau, a lecturer in French at the University of Oxford, spoke to us about the challenges of teaching conversation in modern language, and shared the importance of structuring a language course that prioritizes speaking and listening skills for the sake of understanding the consequential transformations of grammar and vocabulary from the written to the oral form of a language. Dr. Souleau's lecture initiated a lively discussion that addressed questions of conventional methods in Latin language teaching, and distinctions between the register of Latin we are used to seeing in classical literature versus the register we should aim for when speaking Latin. The conversation expanded to encompass the broader aims of Latin pedagogy: should we treat Latin sentences as codes to be broken? To what extent can the structure of the language itself provide insight into the culture? To what extent can and should active use of the language be perceived as a benefit to understanding the Ancient Roman world?

A. Gratius Avitus, a fluent Latin speaker and founder of the Circulus Latinus Londiniensis (London Latin Circle), addressed the participants for one hour in Latin, introducing them to a range of resources, organizations and events which teach and explore uses of Latin as a living language. Videos of Living Latin communities in action demonstrated remarkable variation in individual speaking styles (accents, pronunciation, inflection, and idiosyncracies in vocabulary), and exhibited each speaker's unique ability to bring the language to life. Avitus' talk was eye-opening for participants, some of whom were astonished at the amount of content they could readily understand, even if it had been years or decades since they had encountered formal instruction in Latin.

Avitus also led a highly stimulating short literary seminar, where participants read and discussed (in Latin) the opening of Geoffrey of Monmouth's Vita Merlini (style, themes, and noteworthy areas of engagement with textual precedents in classical Latin, especially in the epic tradition). Avitus was an excellent facilitator, encouraging participants to offer responses to his questions in as much depth and completeness as they were comfortable providing. This activity showed particular potential for further development either in extended sessions in further workshops, or in a regularly meeting Latin conversation group setting, ideally with the facilitation of an experienced Latin speaker. 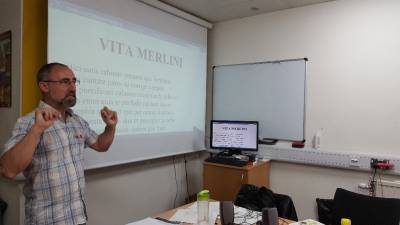 We were very impressed by the level of fluency the participants gained over the course of two days. The transformation between the participants' rather hesitant introductions on Day One and the much more confident full sentences generated during the game of 'Versipellis' on Day Two was wonderful to witness.

We benefited significantly from having an experienced Latin speaker present throughout the workshop. Avitus' help, patience, guidance, and mentorship were a great part of what made the day a success, and participant feedback suggests that this was an important factor in aiding their confidence in developing written and oral composition skills.

The activities were generally well-structured so that people with various levels of Latin proficiency could participate equally, and could challenge themselves in accordance with their experience and comfort levels.

The workshop received overwhelmingly positive feedback, with half of the 14 respondents writing on their feedback forms that they are 'very likely' to continue exploring immersive methods, and 9 participants designating that they 'strongly agree' with the statement that immersive methods are of use to Latin pedagogy.

Many participants described the ways in which their ideas about 'Living Latin' had changed as a result of attending the workshop:

We hope that following the success of this workshop at UCL Greek and Latin we can run similar workshops, a Latin conversation group, or other related activities in Living Latin at UCL, and perhaps in collaboration with existing Living Latin initiatives in the UK and further afield. We have witnessed in a very short period of time the great potential for the pedagogical methods in the active use of Latin to raise students' confidence, enthusiasm, and proficiency in language skills. When students are invited to approach Latin on their own terms, they have a personal stake in mastering grammar concepts and acquiring vocabulary, and when they engage in dialogue on ancient literature in the original language, they carve new interpretative channels that might reflect a greater sensitivity to the cultural perspective found in the language itself.

We thank UCL ChangeMakers and UCL Greek and Latin for helping to make this event a wonderful success, and we look forward to seeing its legacy grow and flourish!

Note: Watch this page for videos of the workshop to be added!