Aeschylus, the first of the great Athenian tragedians, wrote Choephori and Eumenides for performance at the City Dionysia in 458 BC, a festival in honour of the god Dionysus. They are the second and third plays of his trilogy Oresteia ("Story of Orestes"): the first play of the trilogy was Agamemnon. The Oresteia is the only surviving complete trilogy from classical Athens: only a small fraction of ancient drama has survived (seven plays by Aeschylus, seven by Sophocles, and nineteen by Euripides). At the dramatic festival of the City Dionysia, which lasted for five days, three playwrights were chosen to present three plays each over the course of a day. We do not know how common it was for the three plays to form an organic unity in the manner of the Oresteia. The three tragedies were followed by a fourth play called a Satyr play: Satyr plays appear to have been light-hearted plays which presented a comic or satyric take on some aspect of the mythological material of the preceding trilogy. We know that the Satyr play written by Aeschylus to follow the Oresteia was called Proteus, but it has not survived. It must have dealt in a vaguely subversive way with the episode recounted by Menelaus at Odyssey 4 (lines 351-570). (Satyr plays are a quite separate genre from Greek comedy, however, and were written in tragic rather than comic diction.)

The Oresteia and the Ambiguities of Revenge, by Dr Rosa Andújar

The bloody and vengeful saga of the House of Atreus repeatedly haunted the Greek imagination.  In particular, its final instalment, the revenge of Orestes, became one of the most popular subjects in archaic and classical Greek poetry and art.  Many sources, which include surviving vases (such as the red figure vase below, c. 500 BC), depict Orestes' killing of Aegisthus as a laudable act of retribution that avenged the murder of his father: both Homer and Pindar, for example, invoke Orestes as a victorious model to be emulated (by Telemachus in the Odyssey and the young victor Thrasydaeus of Thebes in Pythian 11, respectively). Though these earlier sources sometimes hint at Clytemnestra's complicity, Aegisthus was usually the main perpetrator responsible for the death of the king.  In the Agamemnon, however, Aeschylus extensively reworked the emphasis of the myth, relegating Aegisthus to the margins of the play while giving Clytemnestra centre stage and, for the first time, full responsibility for the murders of her husband and Cassandra. 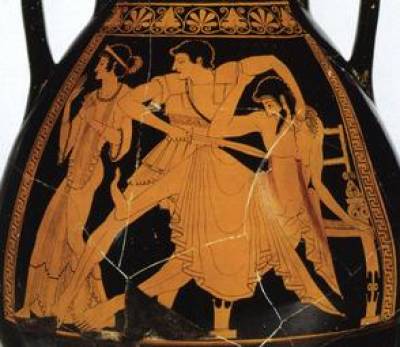 It is against this background that we must understand the situation presented in the plays that finish the trilogy begun by the Agamemnon, the Libation Bearers and Eumenides, in which the son must still avenge his father's murder, but must now commit matricide in order to do so.  In other words, the house of Atreus, already built upon adultery, deception, and revenge thanks to the atrocities committed by previous generations, gets even bloodier, and the never-ending cycle of crime and punishment is guaranteed to continue with new impetus.  These two plays thus focus on the impossible dilemma which, thanks to Aeschylus' innovations, now plagues Orestes: should he kill his mother and face the wrath of her avenging angels, the Furies? Or should he leave her and her lover Aegisthus in peace and risk the eternal scorn of the ghost of his father Agamemnon?
In the Libation Bearers Aeschylus stages the choice made by Orestes and its deadly consequences.  Following his murder of his mother, Orestes immediately acknowledges that his victory is 'polluted' (1017) and describes himself as beaten at the moment of his supposed triumph.  Flanked by the bodies of Clytemnestra and Aegisthus, he is the mirror image of his mother in the Agamemnon, who likewise stood over the bodies of her two victims (Agamemnon and Cassandra) forming an impressive tableau.  At this point he also sees the Furies, who are determined to avenge Clytemnestra and whose presence immediately causes him to flee.  Orestes's exit raises questions that are fundamental to the ambiguities of representation on the Greek tragic stage:  do the Furies really exist as his supernatural tormentors or are they only figments of his frenzied imagination?  The final words of the Chorus, in which they express extreme uncertainty about the future, echo the audience's confusion regarding the reality of what they have just seen as well as the relationship between the divine and human worlds.

In the Eumenides, however, these ambiguities are resoundingly dispelled, as the Furies appear in all their terrifying immediacy.  Even though they appear, Aeschylus' experimentation with the staging of the divine continues.  The Greek gods tend to appear on the tragic stage in one of two general guises: they either deliver the play's prologue and thus explain the problems that underpin the drama or they tie up loose ends ex machina at the play's end.  In Aeschylus' trilogy, Orestes' unprecedented situation can only be resolved with the help of the Olympians themselves, and so Apollo and Athena are brought on in order to establish a new kind of justice that will end the cycle of violent retribution.  As in the Prometheus Bound, the only other surviving play with a similarly impressive cast of divine characters, the drama is transformed into a power struggle between old and new gods: the Olympians, part of a new world order, must persuade the terrifying chorus of Furies, the daughters of Night, to cease their pursuit of Orestes. 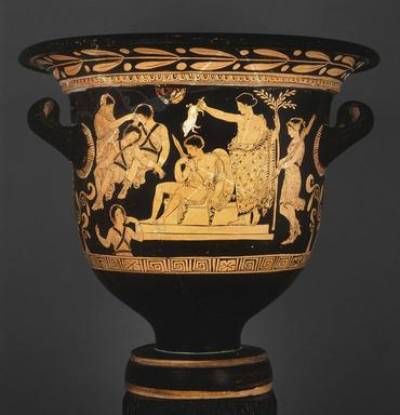 Given the animosity and the conflicts that tend to arise between gods who belong to different generations, one might expect that a conclusion will only be reached after a Hesiodic battle and defeat.  However, Aeschylus once again subverts expectations and both sides remarkably reach a civilised settlement after a trial in which the claims of both sides are fully recognised.  The tragic trilogy which began with a private family matter concludes with a public event, the founding of the Athenian Areopagus, the homicide court.  Many readings of the Oresteia argue that through this legalistic conclusion Aeschylus explores the continuum between primeval anarchy and democratic rationalism: the end of private revenge yields to legal procedure, and the taming of old, feminine, matriarchal deities give way to a new, male-dominated order.  Yet this rational order is only secured when the deadlock is broken by the casting vote of Athena herself: order is shown to be tenuous and fragile, the Furies defeated only by divine fiat and not by the power of reason.     (© Dr Rosa Andújar)

For the text of Pindar, Pythian 11 click here. See also the discussion of the Oresteia story in the poem by Stephen Instone (UCL 1990-2009).

1.    Discuss is the role of the gods in the Oresteia.  Which gods are invoked, when, and why?  How are Athena and Apollo characterised in the Eumenides?
2.    How does the ending of the Eumenides challenge your understanding of the term 'tragedy'?
3.    What is the effect of the replacement of the ancient Furies by the council of the Areopagus?  How does this trilogy apply to Athenian political life?
4.    Would the plays work as free-standing productions, outside of the trilogy?

Aeschylus in the modern world