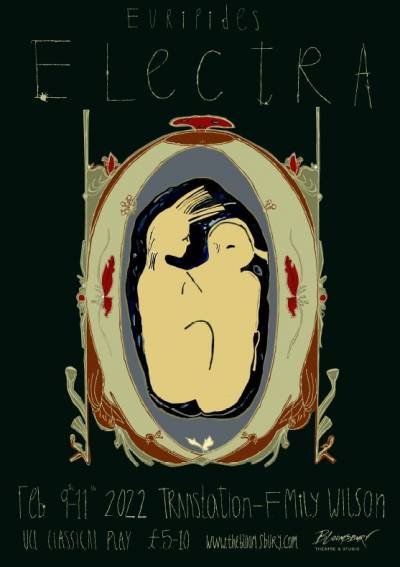 Interactive and interdisciplinary Study Guide with interviews between academics and theatre practitioners, short videos and essays by academics, and other exciting material on Greek tragedy and the contemporary stage.

Have you enjoyed the 2022 Euripides’ Electra? Have you any recommendations, thoughts to share or questions to pose? Drop us a line!

More about the UCL Classical Play

This is now one of the most famous and long-running commitments to the modern production of ancient drama in the world. It attracts large audiences, many of whom are young people studying classical drama at school or university, and is regularly reviewed in the national press. Ticket prices are kept low.

The production is managed by students in the Department of Greek and Latin, with help and advice from staff. A number of former students involved in the classical play have gone on to careers in drama. Students choose a director and a producer in the autumn: the title of the play for the following year is announced in late October (and is advertised on this website).

The Department of Greek and Latin is committed to bringing these productions to the widest possible audience. For each production we run a programme of lectures and workshops, free and open to the public, which are run by leading academics and theatre experts from across the UK. For the benefit of schools and colleges we also create a web-page of study materials on ancient drama in general, and with special focus on the current year's performance.

Last year we held the UCL Odyssey Festival 2021. Read more about the event and the students involved.