VORF commenced in 2005, with the aim of providing the ability to transform vertical height information in the coastal and offshore zones between reference levels such as:

The VORF solution for UK and Ireland was completed in 2008 and has become an essential tool in operational hydrography.  Current focus is on extending the concept globally for the offshore zone beyond 12 nautical miles from land.

Find out more about our collaborator, by visiting the United Kingdom Hydrographic Office (UKHO) website.

Please note, links on this page may direct to external websites.

Until recently, hydrographic surveys have generally been kept separate from land surveys, and surveys at sea often used such sparse data sets that changes in the datum were not readily apparent.

All this is changing. With the advent of technology such as GPS and LIDAR, and increasing interest in areas such as the coastal zone, there is an imperative need for a system that will seamlessly transform between all the different reference surfaces and extend our knowledge of vertical datums offshore. This is what VORF will achieve, through a set of transformation models integrated into one software package.

Once such a system is in place there are many different applications that could potentially make use of it. To take just one example, any ship equipped with a high precision GPS receiver and using the VORF transformation software will effectively become its own tide gauge, with no need to rely on observations made at remote ports. This is likely to have a significant impact on marine safety, but the efficiency implications for activities such as hydrographic surveying are also significant.

The VORF solution for UK and Ireland allows the transformation of data between vertical reference frames, both offshore and land.  To accomplish this, each offshore reference frame is represented as a continuous surface within the European Terrestrial Reference Frame (ETRF89), with a gridded spatial resolution of approximately 1km. 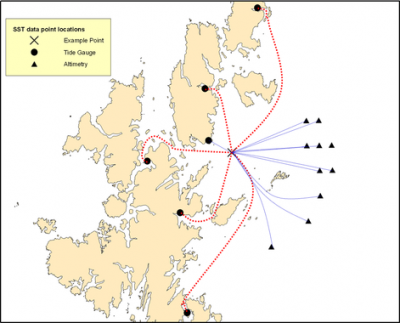 The PSMSL monthly observations of sea level were invaluable in removing meteorological and seasonal bias from short term observations of MSL in the ATT database. Secular trends were derived and applied to ensure all sea level observations centered on the epoch 2000.00.  The OSGM05 geoid was used as the base for all interpolation, and a smoothly continuous model of MSL was developed by recombination of the sea surface topography with this geoid model.

Two sources of tide gauge data were used: the Permanent Service for Mean Sea Level (PSMSL) and the Admiralty Tide Tables (ATT).  Heights of Chart Datum, and hence MSL, were established in ETRF89 by one of  four methods:

Lowest Astronomical Tide is the lowest level the tide will reach over a 19 year period under normal meteorological conditions. In collaboration with Proudman Oceanographic Laboratory surface models of the tidal level LAT were derived with respect to the equilibrium mean sea level from a combination of tide gauge data and hydrodynamic tide models. The following relationship then enables the LAT modelling to be positioned in the reference frame ETRF:

Chart Datum is a level so low so the tide will rarely fall below it, and is the reference to which the depths on nautical charts are referred.  The definition of Chart Datum varies depending on location and tidal regime.  In the UK and Ireland CD is generally defined as being Lowest Astronomical Tide, or as being very close to it.

There are in the environs of 700 Chart Datum definitions in the UK and Ireland; the height of each one in ETRF89 was established by a variety of techniques.  Where direct GPS observations or the use of transformation tools were not possible, relative methods were used to 'hang off' the level from the MSLETRF and LATETRF surfaces.

The Chart Datum surface was computed by developing a corrector surface which 'warped' the LATETRF surface to precisely coincide with the known Chart Datum definitions.

To integrate the offshore reference frames with the onshore land datums, within the small band along the coast VORF permits the use of land datums such as OD Newlyn, OD Poolbeg, OD Belfast and various island land datums.  The majority of these are consistent with the Ordnance Survey OSGM02 tool.

All navigable rivers within UK and Ireland, and all impounded ports, are included in VORF.  Separate techniques model the variations in height in CD and MSL along the path of the river.

Historically Chart Datum is quoted either with respect to a local benchmark or to the national datum (such as OD Newlyn). To acquire the heights of Chart Datum in ETRF89, the primary method is to use a transformation model which provides the link to a national datum. In many locations this is not possible, for example on the remote uninhabited Isle of Sule Skerry there is no land datum and Chart Datum is referenced to tide gauge benchmarks, as shown in the image below.

The VORF team undertook several expeditions around the UK and Ireland to 'tie-in' tide gauge benchmarks with high precision GPS observations in the following locations:

A review of the accuracy of VORF, including field results, can be found in:

The VORF concept was applied globally to create 'VORF-Global'; a description of the method used to generate a high resolution world map of LAT can be found in:

General descriptions of the project can be found in:

A more detailed description of the methodology for deriving a continuous Chart Datum surface can be found in:

Further details on the methodology of deriving sea surface topography around the British Isles as part of the project can be found in:

A description of the methods used to derive the VORF-UK tidal level surfaces can be found in:

A discussion on the future use of the VORF+GNSS concept in hydrographic surveying can be found in:

Requests for access should be directed to the United Kingdom Hydrographic Office: bdc@ukho.gov.uk