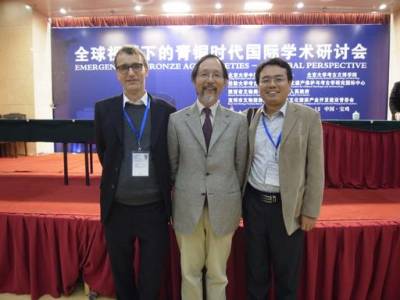 The conference Emergence of Bronze Age Societies: A Global Perspective was held in Baoji, Shaanxi Province, China, from 8 to 11 November 2011. It was the third conference organised by the International Centre for Chinese Heritage and Archaeology (ICCHA), a cooperation between the School of Archaeology and Museology, Peking University, and the Institute of Archaeology, University College London. The conference was generously supported by the State Administration of Cultural Heritage (represented at the venue by its Deputy Director-General Song Xinchao), the Cultural Relics Bureau of Shaanxi Province (represented by director Zhao Rong), the People's Government of Baoji, Qatar Foundation and several other institutions. The event was organised by Xu Tianjin and Chen Jianli (Peking University), Thilo Rehren (UCL) and Lukas Nickel (SOAS).

Over four days speakers from ten different countries presented 35 papers, all of which were simultaneously translated between English and Chinese. Li Boqian, Evgenij Chernykh and Izumi Shimada gave Keynote lectures on the history of bronze metallurgy and development models in East Asia, western Eurasia and South America. Two panels concentrated on the 'Beginnings of Metallurgy', discussing evidence from Asia and Europe. Two more addressed 'Commonalities and Differences' and investigated 'Regional Perspectives', focussing on material from China, southern Nigeria, Spain, Scandinavia, Japan, Korea and northeast Asia. A panel on 'Meanings of Metals' raised a series of issues concerning the uses and interpretation of early bronzes. A double session on 'technology and production' revisited the discourse and produced new evidence on how Chinese bronzes were made. One afternoon was dedicated exclusively to metallurgy of Baoji and Shaanxi province, the host area of the conference and the region from which the famous Bronze Age cultures of Zhou and Qin originated. A poster session included 15 presentations on various aspects of current research and fieldwork. During a late night meeting Chinese participants introduced as yet unpublished results of their current archaeological fieldwork. Visits to the newly erected Baoji Museum of Bronze Objects and an excursion to the Zhouyuan and Zhougongmiao excavation sites gave insight into current research on early Zhou cultural remains in Shaanxi province. In addition to lectures and meetings, the conference provided a forum for informal discussion between specialists.

The conference aimed at assessing Bronze Ages in various parts of the world in a comparative way. As it was the first conference of its kind in China and perhaps world-wide, this task presented a number of stimulating challenges. One such difficulty arises from use of the term 'Bronze Age' itself. Written in capital letters, the term suggests a unilinear evolutionary model which may not be applicable to all metalusing societies. One has to ask, as described by Gore and Shimada in their papers: why in early West Africa and southern America plenty of bronze artefacts were employed but the term 'Bronze Age' is only rarely applied? The term further privileges metal over other, possibly similarly important materials, and suggests an evolutionary framework of increasing social and technological complexity that may not have necessarily been tied to the use of bronze. Even if neither ideal nor self-explanatory, most scholars - for the lack of an useful alternative - still accept and use the term 'Bronze Age'.

Li Boqian and Vince Pigott addressed the possible connection between the Bronze Ages of East Asia and wider Eurasia. Crucial work is currently being done in the cultural transmission area of modern-day Xinjiang and adjacent regions as presented by Mei Jianjun and Wang Hui. The papers by Michael Frachetti and Katheryn Linduff addressed the role of non-settled societies in transmission and development of metallurgy and metal use. Rod Campbell analysed the changes that occurred in Anyang when large-scale production of bronzes commenced, changes that point towards a dramatic shift in Shang society that is yet little understood. The spread of bronze items further east was explored by Miyamoto Kazuo and Shoda Shinya. A whole new section of evidence about early metallurgy in South-East Asia is currently under investigation. The discussion was outlined by Vince Piggot and Victor Mair.

Fundamental differences in the early stages of metal production between what is now central China and other Eurasian cultures have been noted by several participants, yet remain to be sufficiently explained. While craftsmen in the Central Plains concentrated on the production of containers and vessels (some of them of extraordinary size and produced in staggering amounts) and developed a complex casting technology that was adapted to this demand, bronze workers in other cultures rarely engaged in vessel making. Instead, they choose to make images of holy beings as well as representative weapons and tools. Michael Rowlands and Dorian Fuller suggested that a specific nutrition culture and agricultural regime in East Asia gave rise to the prevalence of vessels over other objects. Jessica Rawson further developed this point and suggested that the Chinese situation might be termed a "Bronze Vessel Age".

A number of scholars put forward the notion that bronze was a material of choice, not of economic necessity. Ben Roberts outlined evidence from various contexts that suggests that early bronze objects may have had little advantage over vessels or tools made of traditional materials, and that they were acquired not necessarily for utilitarian reasons. In many cases it seems more likely that they were preferred for their visual appeal and a connotation of social prestige, as Ulrike Sommer demonstrated with regard to pale ore (Fahlerz) objects that were popular in Central Europe. Lukas Nickel added that the complex shapes and intricate ornaments often admired on Chinese bronzes point towards a conscious engagement of the craftsmen with the perception process, and that an investigation of the production process can help gaining a better understanding of the relationship between patron, artisan and user.

Bronze is an alloy that requires the sourcing and mining of ores and knowledge and experience in complex smelting and casting processes, and further requires craft specialisation and division of labour. This complex creation process cannot be understood without the notion of value. David Wengrow assessed the material in the framework of hoarding and circulation and as an interaction between small-scale, ore-mining and hoarding communities and urban bronze-consuming communities where metal circulated as standard currency units, an approach that is promising for many contexts in Europe and Western Asia and beyond. In China, where no standard (that is exchangeable) bronze units appear to have been produced prior to the 4th century BC, issues of value are still little understood. In this respect the experience of the conference is already opening up new horizons for comparative research

The production process of bronze vessels remains a major focus of researchers working on China. Chen Jianli and Liu Siran presented the results of their analysis of Zhou period clay molds. Zhang Changping, Zhou Weirong, Ma Sai and others outlined new research on casting technology. Xu Hong discussed discoveries from Taosi, one of the earliest bronze age sites in China.

The relationship of metal use and modes and practicalities of transport and trade received wide attention. Helle Vandkilde inquired how metalworking could develop in southern Skandinavia in the late 3rd millennium BC even if the required ores were not locally available. Ben Roberts even suggested that long-distance contacts were a key feature of early bronze using cultures in Eurasia and suggested that the limited availability of tin ores and certain technological choices point towards cross-continental connections of Bronze Age societies. A crucial point was added by Charles Gore who presented orally transmitted evidence that in the case of Benin technological knowledge may have been transferred by way of migrating whole families of bronze workers from Ife. This information, even if anecdotal, suggests that the transfer of technologies may have been connected to the transmission of a much wider set of social and political ideas, a notion that might require a revision of the traditional understanding of early bronze producing and using communities.

Participants suggested that decisively different approaches to the investigation of Bronze Age societies may and ought to be taken in the future. We would want to know more about the environmental impact of bronze production and should examine fuels used for smelting and melting. The relationship between patron, audience and craftsmen needs more attention. Izumi Shimada postulated a "holistic" approach to bronze products that would investigate the complete process from ore sourcing to the use of the finished object, in order to avoid a "compartmentalized" vision of bronze objects and their production. The social significance of bronze needs more attention as bronzes will mainly inform about elite segments of a bronze using society. Other lines of inquiry should relate to infrastructure and the role of rivers, horses and chariots in trade and spread of technological knowledge. What is the significance of weapons and warfare in this process? One might further explore the metallurgical characteristics of arsenical bronze and tin bronze, in order to better understand the observation that only the development of the latter led to metallurgy spreading all over Eurasia.

Even though most researchers accept that from the mid-late 3rd millennium BC a Eurasia-wide "Bronze Age" can be observed, research on this phenomenon is still in a highly compartmentalised state. While illustrating the regionalism of current research traditions, the papers presented at the conference also demonstrated the analytical potential of a truly global approach; something to be worked towards in the future.

In exploring Bronze Age societies, a whole range of questions still remains to be addressed. Currently a growing number of scholars across the globe recognise the necessity to investigate the phenomenon in a comparative and geographically integrated way, and with a broader perspective that should include all aspects of creation and use of bronze artefacts. The conference further aimed at including Chinese evidence and research into the international discussion and introducing the world-wide discourses into China. In this regard it was successful mainly thanks to the simultaneous translations provided by a group of well-versed students of Peking University. The Baoji conference may have been a small yet crucial step in the envisioned broadening of perspectives in international research on Bronze Age societies.