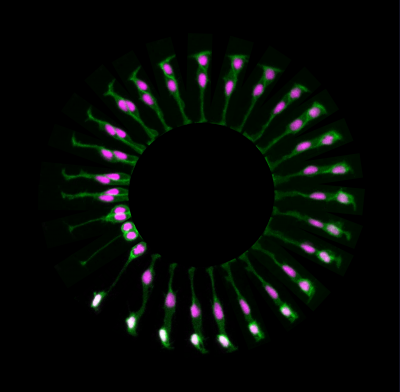 Our lab is currently investigating the cellular and molecular mechanisms that regulate neurogenesis and neuronal pattern in brain and spinal cord and that may be at the origin of developmental brain disorders. We use live imaging in developing zebrafish and human systems combined with histological and transcriptional analysis.

During normal brain development there is a tightly controlled balance between brain growth and production of neurons. One of the processes that allows this mode of development is called asymmetric cell division and involves the generation of two distinct daughter cells (see Figure 1 for example: a neuron and a progenitor) from a single cell division. By using live-imaging approach in zebrafish, we demonstrated for the first time that asymmetric inheritance of apical domain correlates with asymmetric divisions.

The inheritance of apical domain was for a long time thought to be important for establishing and maintaining epithelial structure and was therefore predicted to be important for progenitor cell identity. However, this is not the case in zebrafish and other vertebrates systems in which inheritance of the apical Par3 domain is in fact correlated with neuronal cell fates (Alexandre et al, 2010). The daughter cells that lose contact with the apical surface during cell division inherits the basal process and are able to re-attach apically (Alexandre et al, 2010, Kosodo et al, 2008).

We continue investigating the mechanisms that regulate asymmetric cell fate decisions and regain of apical attachment.

To investigate neuronal apical release in the zebrafish spinal, we used live-imaging to monitor neuronal differentiation. We discovered that all differentiating spinal neurons transiently elongate two long protrusions at the basal surface of neuroepithelium. These basal protrusions remain extended for several hours and express the Notch ligand, DeltaD. The cells that contact these basal protrusions upregulate Notch signaling pathway (Figure 2), suggesting that Delta expressing basal protrusions may activate Notch signalling pathway in neighbour cells. In addition, we characterised the dynamic patterning of neuronal differentiation in the spinal cord and discovered that neurons born around the same period are rarely born closer than the distance of a basal protrusion. This lead to us to propose a model in which basal protrusions can prevent neurons differentiating together in space and time through the delivery of Notch Delta signaling at a certain distance (Hadjivasiliou and Moore et al, 2019). This model is supported by a mathematical model and by the observation that inhibition of basal protrusions growth reduced the spacing between neurons that were born at same time. This work results from an ongoing collaboration with Jon Clarke’s lab at Kings College London and Zena Hadjivasiliou at Geneva University.

In collaboration with Kathleen Millen and Parthiv Haldipur at Seattle Children’s Research Institute we started characterising human hindbrain development. We discovered that human developing cerebellum contains neural progenitor zones that are spatially and temporally expanded and contain distinct cell types that do not exist in other mammals (Haldipur et al, 2019). We are currently characterising the cell types and cellular mechanisms that may regulate human hindbrain development and growth and that may be disrupted in cases of hindbrain hypoplasia. 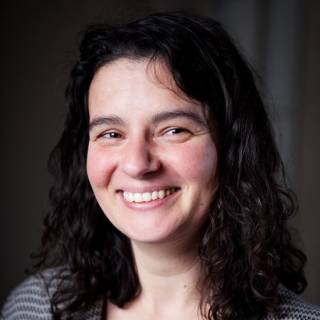