My research group works on eye development and repair. Our aims are to define the molecular genetic pathways that regulate eye development, to understand how these pathways are disrupted in congenital eye disease, and to apply knowledge of retinal development to devise new strategies to repair and regenerate the diseased retina.

We analyse patient DNA samples to identify the genetic causes of childhood blindness. Between 9-20% of cases of childhood blindness in the UK involve structural malformations of the eye. These congenital eye abnormalities occur when the normal biological processes that form the eye before birth are disrupted. By correlating molecular diagnoses with clinical phenotype and outcomes our research aims to support clinical practice and management in paediatric ophthalmology.

A complex series of morphogenetic events and tissue interactions give rise to the embryonic optic cup, from which the mature eye globe subsequently develops before birth. Developmental eye anomalies, such as microphthalmia and coloboma, Axenfeld Rieger syndrome, corneal opacity and congenital glaucoma occur when gene mutations alter key developmental pathways. Mutation of the CHX10 gene, essential for expansion of the retinal progenitor cell population of the neural retina, was the first identified cause of non-syndromic microphthalmia. My lab studies models of abnormal eye development (e.g. Chx10-/- mice), in order to identify molecular pathways regulating neural progenitors destined to form the mature retina and anterior segment tissues.

Retinal progenitor cells undergo a finite number of cell divisions to produce the full complement of retinal neurons and glial cells during development. The adult retina is normally post-mitotic and is unable to replace neurons lost in disease. Retinal neurons die in retinal diseases such as retinitis pigmentosa and Lebers congenital amaurosis that involve loss of photoreceptor cells, or glaucoma involving loss of retinal ganglion cells, and the loss of vision is irreversible. We are exploring stem cell populations in the eye that may have the potential to repair the diseased retina. We showed that lack of Chx10 causes the adult retina to maintain a population of neural progenitors that can be expanded in neurosphere cultures in vitro. A different population of quiescent progenitor cells can be expanded from the ciliary epithelium of the eye. We are investigating whether such cells sources can be directed to produce new photoreceptors.

Current work is focussed on isolating photoreceptor precursor cells from in vitro stem cell cultures, optimising conditions to promote the development of new cone photoreceptors cells, and defining the molecular properties that allow transplanted cells to effectively integrate and repair the retina. 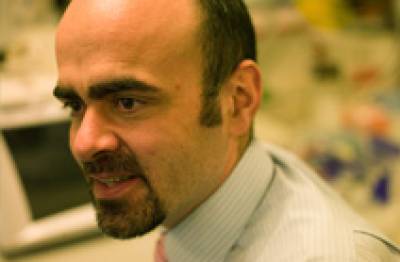