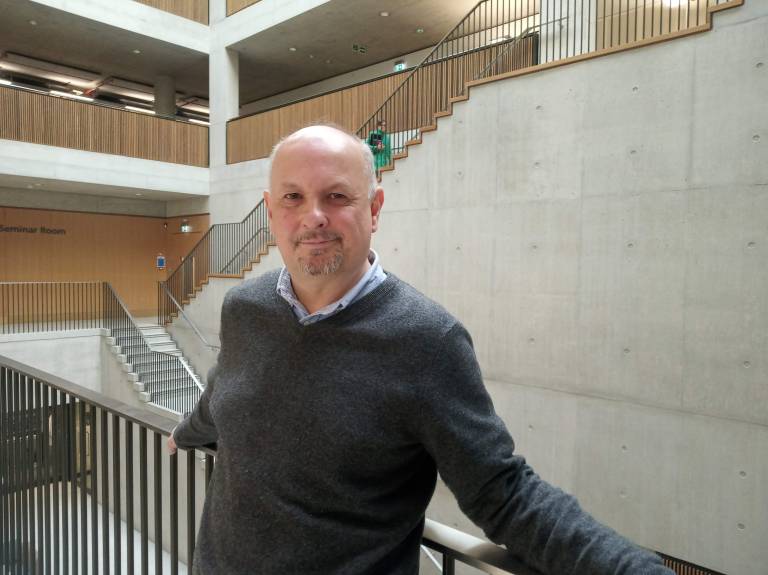 Reported in Nature today, the findings suggest WGS – a technique that involves reading all three billion plus ‘letters’ in the body’s DNA sequence - could benefit patients with primary immunodeficiency disorder (PID) whose symptoms are difficult to predict, classify or treat.

The study, led by the University of Cambridge, identified many potentially new causes of PID. This group of more than 300 conditions can lead to repeated and often life-threatening infections, cause immune cells to turn on the patient’s own body, and increase the risk of cancer. The most life-threatening PIDs tend to present in childhood.

The study also showed that interrelationships between genetic mutations could account for the huge variety of symptoms seen in patients.

“Our study shows that WGS can provide a definitive diagnosis in some cases where current standard methods cannot,” says Professor Adrian Thrasher, a lead investigator and Consultant in Immunology based at the ICH and Great Ormond Street Hospital (GOSH).

“That’s so important because currently, only a third of PID patients get a conclusive diagnosis. Knowing the cause means we can provide counselling for the family and help them understand whether the condition could affect other family members. Crucially, it can allow us to recommend treatments that we know work, but also to design new drug treatments and genetic therapies.”

The study also sheds new light on why patients diagnosed with the same PID can display vastly different symptoms.

“Until now, the reasons for this variability have been very unclear,” says Professor Thrasher. “WGS has allowed us to map out unique combinations of genetic errors in each patient and consider how their interactions could lead to different symptoms.”

A multidisciplinary team set out to tackle the ‘diagnostic odyssey’ facing many PID patients, by analysing the genetic sequences of 1,318 people, ranging in age but primarily adults.

They performed WGS for each participant and analysed particular sequences of DNA to hunt for differences from the ‘normal sequence’ – variations that could be causing disease.

Around 1% of our DNA contains specific instructions to build proteins – fundamental components of the body that are involved in every process you can think of. After analysing these regions - known as genes, or ‘coding DNA’ – the team found 151 patients had variations already known to cause disease. But they also found variations in genes that had never before been linked to PID.

The other 99% of our DNA, which doesn’t contain protein-building instructions, was once considered insignificant and referred to as ‘junk DNA’. We now know it plays a vital role in controlling gene expression – how much of a protein is produced and when, as well as other crucial cell functions. When the team analysed these regions, they found DNA was altered in areas that could also play a role in causing PID.

They also found that genetic changes changes overlapped or interacted with one another. The complexity of these mutations could explain some of the variability in symptoms seen across PID patients and helps researchers understand the underlying mechanisms. Eventually this will provide doctors and families with valuable information about how each patient’s condition is likely to progress and respond to treatment.

As a follow up to this study, the researchers have recently secured collaborative funding from the Wellcome Trust to investigate the relationship between genetic alterations identified by WGS and the clinical and biological manifestations of PID.

The study’s large participant group were recruited through the National Institute of Health Research (NIHR) BioResource – Rare Diseases Program. This initiative acts as a national hub for the recruitment of participants affected by rare diseases, and their relatives, to research studies.

This study was led by the University of Cambridge and funded by the NIHR Cambridge BRC. Research at GOSH is underpinned by support from the NIHR Great Ormond Street Biomedical Research Centre (BRC) and GOSH Charity. Professor Thrasher is a Wellcome Trust Principal Research Fellow.

For further information please contact the GOSH-ICH Press Office on 020 7239 3039 or email media@gosh.nhs.uk.

Founded in 1852, Great Ormond Street Hospital is one of the world’s leading children’s hospitals with the broadest range of dedicated, children’s healthcare specialists under one roof in the UK. With more than 252,000 outpatient and 43,000 inpatient visits every year, the hospital’s pioneering research and treatment gives hope to children from across the UK with the rarest, most complex and often life-threatening conditions. As an international centre of excellence in child healthcare, our patients and families are central to everything we do – from the moment they come through the door and for as long as they need us. Visit www.gosh.nhs.uk

Great Ormond Street Hospital Children’s Charity needs to raise money to support the hospital to give seriously ill children, the best chance for life. The charity funds research into pioneering new treatments for children, provides the most up to date medical equipment, funds support services for children and their families and supports the essential rebuilding and refurbishment of the hospital. You can help us to provide world class care for our patients and families. For more information visit www.gosh.org

The UCL Great Ormond Street Institute of Child Health (ICH) is part of the Faculty of Population Health Sciences within the School of Life and Medical Sciences at University College London. Together with its clinical partner Great Ormond Street Hospital for Children NHS Foundation Trust (GOSH), it forms the UK's only paediatric National Institute for Health Research (NIHR) Biomedical Research Centre and has the largest concentration of children's health research in Europe. For more information visit www.ucl.ac.uk/child-health

The National Institute for Health Research (NIHR) is the nation's largest funder of health and care research. The NIHR:

The NIHR was established in 2006 to improve the health and wealth of the nation through research, and is funded by the Department of Health and Social Care. In addition to its national role, the NIHR supports applied health research for the direct and primary benefit of people in low- and middle-income countries, using UK aid from the UK government.