An international collaboration including researchers from the UCL Great Ormond Street Institute of Child Health (ICH) has found brain tumours in babies are biologically different to those in older children and could be targeted by existing medications. 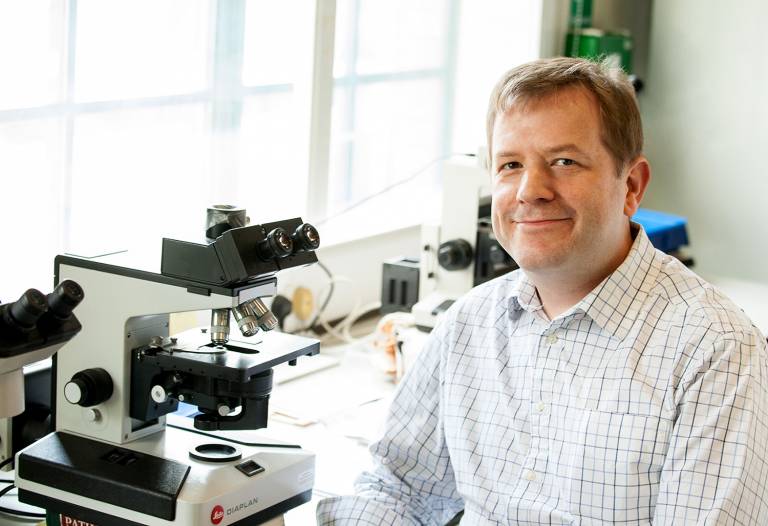 This new understanding is set to change the World Health Organization’s diagnostic guidelines for infant brain tumours and could help some children avoid the need for intensive treatment such as chemotherapy.

Published today in Cancer Discovery, this research is one of the most comprehensive studies on infant brain tumours, involving samples from 241 patients from around the world. Although these tumour samples looked similar under the microscope, scientists revealed that 54 percent were distinct, having entirely different genetics. More than half of those distinct samples had specific genetic weaknesses – known as ALK and NTRK gene fusions – which could be targeted by existing medications.

This research provides a new understanding of an aggressive type of brain tumour, called a glioma. These types of tumours in infants are not only distinct from other tumours but act differently depending on the age of the affected child.

Babies which are in their first year of life seem to have a much greater chance of survival – with two thirds surviving more than 5 years - than those who are diagnosed later in life.

This study has uncovered that the genetic differences in tumours of younger children may explain why they are less aggressive. It could also help to identify affected babies who may not require chemotherapy, which can be harmful to the young developing brain.

“Although chemotherapy is a very good treatment option for some brain tumours in infants, there are side effects. With further research I’m hoping we can find more targeted, kinder treatment options for all children with brain tumours” said Professor Tom Jacques, Institute of Child Health.

This research involved samples from around the world from children who were diagnosed with glioma brain tumours and was led by The Institute of Cancer Research, London with support from colleagues at Hopp Children’s Cancer Center Heidelberg in Germany, the UCL Great Ormond Street Institute of Child Health, and St. Jude Children’s Research Hospital in the USA.

After identifying those tumours with ALK weaknesses, the team tested the effects of an ALK inhibiting drug on mice in the laboratory and found that it significantly reduced tumour size and outperformed chemotherapy.

Next, the team grew mini tumours in the lab from patients’ samples with NTRK gene fusions and found that they responded well to NTRK inhibiting drugs.

Two children whose brain tumours were found to have the NTRK gene fusion, were successfully treated with targeted medications, offering further evidence and promise for a more personalised targeted treatment approach in the future.

“This collaborative study has shown that we may not only be able to offer kinder treatments to infants, but also offer effective and more personalised treatments for children with other life-threatening tumours too”, said Professor Jacques.

More clinical trials are due to be set up to help to better understand tumor biology and further test NTRK and ALK targeted therapies.

For further information please contact the GOSH-ICH Press Office on 020 7239 3039 or email media@gosh.nhs.uk.

Founded in 1852, Great Ormond Street Hospital is one of the world’s leading children’s hospitals with the broadest range of dedicated, children’s healthcare specialists under one roof in the UK. With more than 252,000 outpatient and 43,000 inpatient visits every year, the hospital’s pioneering research and treatment gives hope to children from across the UK with the rarest, most complex and often life-threatening conditions. As an international centre of excellence in child healthcare, our patients and families are central to everything we do – from the moment they come through the door and for as long as they need us. Visit www.gosh.nhs.uk

Great Ormond Street Hospital Children’s Charity needs to raise money to support the hospital to give seriously ill children, the best chance for life. The charity funds research into pioneering new treatments for children, provides the most up to date medical equipment, funds support services for children and their families and supports the essential rebuilding and refurbishment of the hospital. You can help us to provide world class care for our patients and families. For more information visit www.gosh.org

The UCL Great Ormond Street Institute of Child Health (ICH) is part of the Faculty of Population Health Sciences within the School of Life and Medical Sciences at University College London. Together with its clinical partner Great Ormond Street Hospital for Children NHS Foundation Trust (GOSH), it forms the UK's only paediatric National Institute for Health Research (NIHR) Biomedical Research Centre and has the largest concentration of children's health research in Europe. For more information visit www.ucl.ac.uk/child-health

The National Institute for Health Research (NIHR) is the nation's largest funder of health and care research. The NIHR:

The NIHR was established in 2006 to improve the health and wealth of the nation through research, and is funded by the Department of Health and Social Care. In addition to its national role, the NIHR supports applied health research for the direct and primary benefit of people in low- and middle-income countries, using UK aid from the UK government.