Malica Schmidt, a PhD candidate in UCL's Centre for Nature Inspired Engineering, undertook over 30 minutes of microgravity research relating to the recycling of water in space aboard a parabolic flight in September 2020. 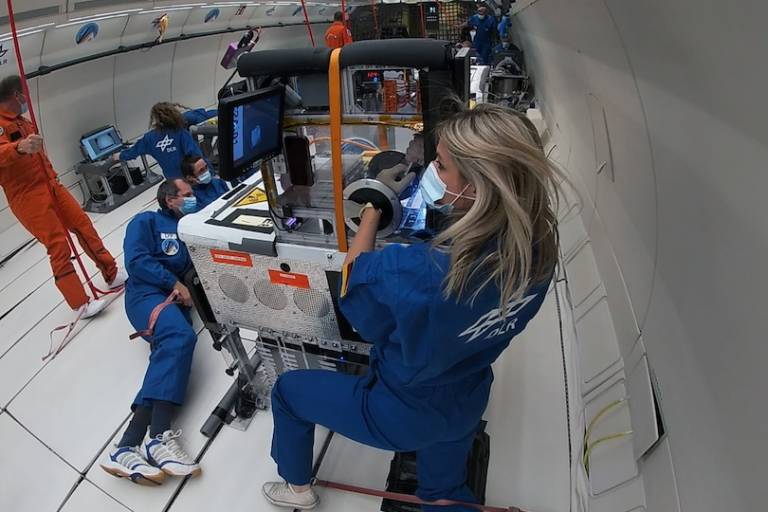 Carrying water to space is extremely costly, thus recycling of it should be improved. On Earth, water management is also essential, for example to control humidity in buildings and where fresh water is scarce. UCL Centre for Nature Inspired Engineering (CNIE) PhD candidate Malica Schmidt draws lessons from nature to develop multi-functional surfaces to enhance water capture for reuse, combined with other desirable properties. Malica is supported by an EPSRC National Productivity Investment Fund studentship and is a CNIE PhD candidate co-advised by Prof Marc-Olivier Coppens (UCL Chemical Engineering) and Prof Marcos Cruz (The Bartlett).

The novel Nature-Inspired, Multi-Functional Surfaces (NIMFS), were designed to absorb excess atmospheric moisture produced by astronauts’ indoors activities and transport it passively to improve existing and future life support systems on the International Space Station (ISS) and missions to the Moon, Mars, and beyond. Previous ground-based experiments in the CNIE’s labs on designs manufactured using a Nanoscribe “3D microprinter”, suggest increased performance of NIMFS in microgravity. Parabolic flights, on which microgravity is achieved during each apex of the parabola, allow this hypothesis to be tested. 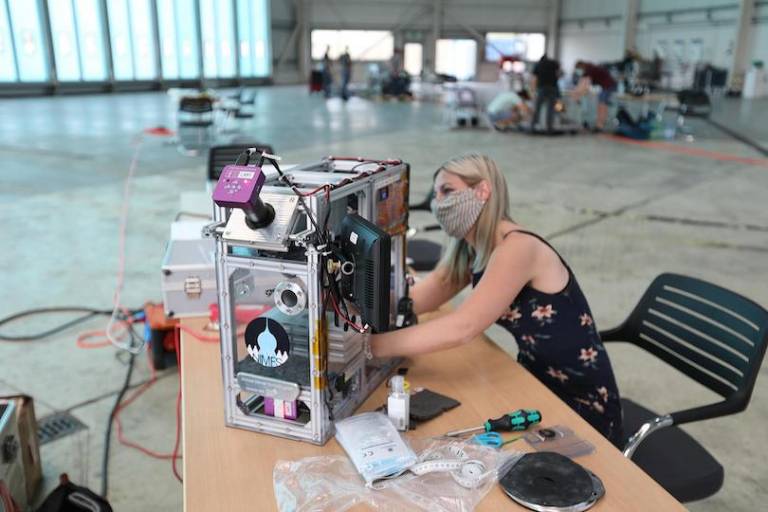 From 16 to 24 September 2020, the German Aerospace Center Space Administration (DLR, Deutsches Zentrum für Luft- und Raumfahrt) organised the 35th Parabolic Flight Campaign with the participation of eight teams during three flight days in Paderborn-Lippstadt Airport. Among them was the physical science experiment of Malica in collaboration with two departments from UCL, the DLR, the European Space Agency (ESA), and the Karlsruher Institut für Technologie (KIT).

In these flights, microgravity is achieved by flying a series of 31 parabolas per day in the Airbus A310 Zero-G, owned by the French company Novespace. During these parabolas, Malica and the experiment experienced 1.8 g during pull up of the airplane’s nose to 50 degrees, 22 seconds of microgravity when the pilots throttled the engine back, and a second 1.8 g phase when the plane pulled down, before it went back to steady flight.

For Malica and her team, this flight was the first of a series of experiments in microgravity, which may be used as a bridge to the ISS. It was also the first DLR flight during the Covid-19 pandemic. The originally scheduled flight in Bordeaux, France, had been postponed last-minute, but a later campaign flying from Paderborn materialised. In a feat of resilience and endurance, Malica, the team, and the other researchers had to deal with difficult, volatile conditions as institutions and labs were closed, but they took the opportunity of partial (re-)openings to make the impossible happen. 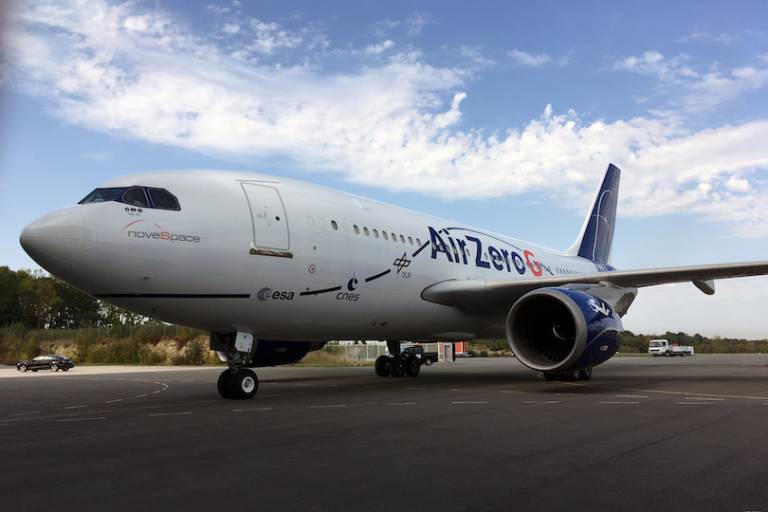 The Airbus A310 Zero-G plane used for the parabolic flight. Credit: Malica Schmidt.

Apart from the synthesis of the NIMFS at UCL CNIE and KIT, Malica designed and assembled a flight-proof setup, including components manufactured with exceptional assistance from workshops and research technicians both at UCL's The Bartlett, and at the DLR, with the latter administration’s support. At last, months of preparation were put to good use for Malica to get the times right to carry out experiments with military precision, socially distanced under the challenging conditions of the parabolic flight rollercoaster. A total of 35 minutes of microgravity research has been accumulated, which is currently being analysed.

The Centre for Nature Inspired Engineering at UCL is a cross-disciplinary centre based within UCL Chemical Engineering, which draws lessons from nature to engineer innovative solutions to our grand challenges in energy, water, materials, health, and living space. Research is aligned to the UN Sustainable Development Goals, the UK Industrial Strategy and UCL’s Grand Challenge on Transformative Technology.

The article was written by Malica Schmidt.