UCL Chemical Engineering has a long and distinguished history as a world-leading research department – the first of its kind in the UK. Find out more about some key figures and dates in our history

The history of our department is closely linked to Sir William Ramsay. UCL’s Department of Chemical Engineering was founded in his memory in 1923, with part of its funding raised by the Ramsay Memorial Fund. The head of the new department was the first professor of chemical engineering ever appointed in the UK, and one of the first in Europe. 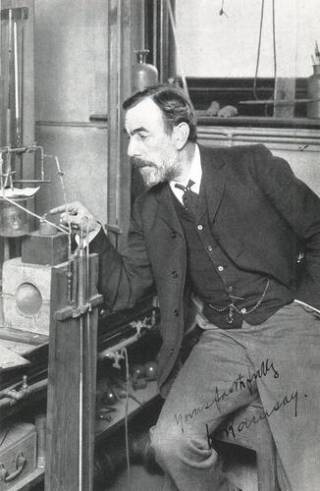 William Ramsay came to UCL in 1887 from University College Bristol, where he had been both the principal and a professor of inorganic chemistry. He had already completed distinguish research, travelled widely, and made personal contact with many leading contemporary scientists. The research that would make his name famous was undertaken at UCL.

The physicist Lord Rayleigh discovered that the density of the element nitrogen obtained from the atmosphere was greater than that of nitrogen produced from chemical compounds. With Rayleigh’s consent, Ramsay set out to provide an explanation. Using the fact that nitrogen is taken up by heated magnesium, he established that the progressive removal of nitrogen from air concentrated into an unknown gas heavier than nitrogen.

The result was the discovery of a chemically inert gas which he called argon (Greek for ‘idle’). Furthermore, Ramsay realised that if there was one inert gas, then there ought to be a whole group of such gases filling a gap in the periodic table of elements. In rapid succession between 1895 and 1900, he established the existence of terrestrial helium (which had already been detected in the sun’s chromosphere during the eclipse of 1868), as well as of neon, xenon and krypton. In 1903, Ramsay (in conjunction with F. Soddy) discovered the detection of helium in the emanations of radium.

His success brought swift recognition; he was knighted in 1902 and received the Nobel Prize in 1904 "for his discovery of the inert gaseous elements in air and his determination of their place in the periodic system". Sir William Ramsay died at Hazlemere, High Wycombe, Buckinghamshire, on 23 July 1916. Soon after his death, a memorial fund was established to promote the development of the science of chemistry.

In 1923, UCL’s Faculty of Science created the innovative Department of Chemical Engineering. Both the new chair and the laboratories that followed were a memorial to Sir Williams Ramsay. Half of the Ramsay Memorial Fund was put towards the new department, which also received substantial support from industrial sponsors. The first professor of chemical engineering in the UK, as well as the first Ramsay Chair, was E.C. Williams. Postgraduate courses started in the first year of the new department, but were initially greatly improvised due to the department’s temporary accommodation. Completely new laboratories opened in 1932, which later suffered severe bomb damage in World War II. The department’s undergraduate courses began in 1937.

A. J. V. Underwood was an Honorary Lecturer in the Department of Chemical Engineering between 1932 and 1934. He developed a correlation to estimate the minimum reflux required to produce a specific concentration of a feed component in the distillate from a specified concentration in the feed. The Underwood equation is also known as the Underwood-Fenske equation.

The Fenske equation in continuous fractional distillation is an equation used for calculating the minimum number of theoretical platesrequired for the separation of a binary feed stream by a fractionation column that is being operated at total reflux (i.e., which means that no overhead product distillate is being withdrawn from the column). The equation was derived in 1932 by Merrell Fenske, a professor who served as the head of the chemical engineering department at the Pennsylvania State University from 1959 to 1969.[1]

Philip C. Carman was a PhD student in the department. His research focussed on fluid dynamics. He is know for developing the Carman-Kozeny equation.