Since January 2015 we have been using the Gene Ontology (GO) to describe the biological roles of microRNAs (miRNAs). To date we have provided all manual human RNA GO annotations.

We have been funded to curate miRNAs involved in cardiovascular and neurological processes. At the end of 2019 we had provided over 4,600 GO annotations for over human 400 microRNAs. The prioritisation of microRNAs for curation is ongoing but we focus on human miRNAs that are relevant to disease. Currently we are the only group prioritising human miRNAs GO annotation, these can be viewed at QuickGO. In addition, we have developed very specific guidelines (Huntley et al., 2016) to ensure consistent annotation of miRNAS which we apply during the curation of these RNA. Alongside this we have curated the roles of the key human proteins involved in miRNA processing, such as Drosha and Dicer.

The RNA annotations are available in QuickGO, miRBase, NCBIGene, RNAcentral and AmiGO2, or in the regular GOA release files. In addition, our miRNA:target mRNA binding annotations are accessible for inclusion in network analyses from the PSICQUIC web service, in the EBI-GOA-miRNA file. Information about the data included in the PSICQUIC web service is also available.

As part of this project we have drawn up miRNA curation guidelines (Huntley et al., 2016) in consultation with the Gene Ontology (GO) Consortium and experts in miRNA research, which cover how a curator should translate into GO annotations the common experimental assays used to investigate miRNA function, including how to annotate experimentally verified targets of miRNAs as well as the physiological effects that silencing has on the cell or organism. Note that GO Consortium guidelines have changed since the publication of the miRNA curation guidelines (Huntley et al., 2016). For more specific details see the Molecular interaction data set for miRNAs and their targets section below

Any queries about the miRNA project should be directed to r.lovering@ucl.ac.uk.

Molecular interaction dataset for miRNAs and their targets
The miRNA:mRNA interaction file is available: https://www.ebi.ac.uk/QuickGO/psicquic-rna/webservices/current/search/interactor/* and via the PSCIQUIC web service. The data set is in PSI-MITAB 2.7 format, which is described at https://psicquic.github.io/MITAB27Format.html.
This file contains the miRNA (RNAcentral ID) and the mRNA (UniProt ID) that it has been experimentally shown to bind and/or regulate.
In this file the interactions are indicated as either:
EBI-GOA-miRNA curation details

Huntley, et al (2018) provides a description of how the PSI-MITAB format interactions are derived from the GO annotations:

A molecular interaction dataset (“EBI-GOA-miRNA”) was created in PSI-MI format and made available on the PSICQUIC web service, to enable computational access to miRNA interactions with their experimentally validated targets. The source of the information in this data set is GO annotations that we have created containing experimentally verified miRNA:target interaction data. GO annotations used for this purpose conform to the following criteria; the “Database Object ID” field of the GO annotation file must be a miRNA, specified by an RNAcentral ID, AND the “Annotation Extension” field must contain an mRNA target, specified by a UniProt ID (del-Toro et al. 2013; Huntley et al. 2014). For the PSICQUIC specification, those interactions described with the Molecular Function GO term mRNA binding involved in post-transcriptional gene silencing (GO:1903231) are assigned interaction type “physical association,” indicating direct binding of the miRNA to the mRNA target. Interactions described only with one of the following GO Biological Process terms: gene silencing by miRNA (GO:0035195); miRNA mediated inhibition of translation (GO:0035278); mRNA cleavage involved in gene silencing by miRNA (GO:0035279); deadenylation involved in gene silencing by miRNA (GO:0098806), but without the Molecular Function term above are assigned the interaction type “association,” indicating that the evidence demonstrated miRNA regulation of the target only (see “Data set availability” section below for the file format information and access to this data set).

The ARUK funded the creation of over 1,000 GO annotations which have facilitated the detailed and high-quality annotation of 160 Alzheimer's-relevant microRNAs. A variety of focused projects were undertaken including the curation of:

The BHF funded the creation of over 3,600 GO annotations which have facilitated the detailed and high-quality annotation of almost 400 cardiovascular-relevant microRNAs. A variety of focused projects were undertaken including the curation of:

Hao Chen, MSc project 2017. Familial hypercholesterolemia (FH) is a common inherited lipid disorder that can cause cardiovascular diseases (CVD) if untreated. Treatment on FH depend on management of plasma low-density-lipoprotein (LDL) cholesterol. High level of plasma LDL cholesterol can induce atherosclerosis and plaque buildup in the walls of the arteries. There is evidence that suggest miRNAs’ regulation of LDL-C is due to their regulation of FH-associated genes, such as LDLR, PCSK9, APOB, LDLRAP1, ABCA1 and ABCG1. This project created 290 GO annotations, of which 22 were transferred from mouse miRNAs to human miRNAs using the ISS evidence code. The prioritised mRNA targets are listed below:

Zara Umrao, MSc project 2015. Aortic aneurysm (AA) is a cardiovascular disease characterized by swelling of the aorta, the main vessel that runs from the heart to the abdomen. Recently, research has revealed the role of microRNAs (miRNA) in some diseases, including AA, which may enable a better understanding of the disease. The role of one such family of miRNAs, miRNA29, was investigated by creating annotations from existing literature. Forty papers were curated, from which 497 GO annotations were made. The annotations spanned a range of species, including human, mouse, rat, zebrafish and dog. The role of miRNA29 in regulating essential extracellular matrix proteins, such as elastin, collagen, fibrillin and matrix metalloproteinases was captured. In addition, the GO annotations also described the role of miRNA29s in activities, such as aorta morphogenesis, cell migration, cell proliferation, DNA methylation and epithelium regeneration.

Vanessa Acquaah, MSc project 2016. Recent evidence has shown that miRNAs, in particular microRNA-1 (miR-1) are found in abundance within cardiac tissues and may be particularly important in early heart development. A total of 313 annotations were made through the use of experimental evidence from 49 papers using GOC curation guidelines. Annotations covered the role of miR-1 as well as other miRNAs in cardiomyocyte proliferation and cardiomyocyte differentiation. Additionally, development of cardiac neural crest cells through processes such as endothelial to mesenchymal transition (EMT) and differentiation of epithelial cells are processes regulated by miRNAs; these roles have been captured as GO annotations.

Shirin Saverimuttu, MSc project 2018. Alzheimer’s disease (AD), the most common form of dementia, is characterised by amyloid beta (Aβ) accumulation in extracellular plaques. Moreover, Aβ accumulation has been hypothesised as a primary cause of the disease, with a dysregulation to the proteins involved in Aβ clearance thought to be critical. Interestingly, hundreds of microRNAs have been found to be altered in brain tissue affected by AD and several have been experimentally proven to regulate the expression of Aβ clearance proteins. This MSc project led to a total of 258 GO annotations being created. This allowed for knowledge describing how microRNAs regulate Aβ clearance proteins to be captured, as well as the capturing the downstream effects of these microRNAs. The prioritised mRNA targets are listed below:

Shirin Saverimuttu is responsible for this project, the goal of which is to annotate microRNAs (miRNAs) that regulate the expression of interleukins with a role in Alzheimer’s-relevant processes. In order to achieve this goal, it was necessary to generating a priority list of interleukins (below) and then to identify their regulatory miRNAs. The miRNAs are identified on a target-by-target basis, firstly using mirTarBase and then with specific searches in PubMed. This project is funded from Functional Gene Annotation group’s discretionary funds. The prioritised mRNA targets are listed below:

Katherine Thurlow, MSc project 2019. Evidence for cerebrovascular mechanisms, particularly increased breakdown and dysfunction of the blood-brain barrier (BBB), as key contributors to Alzheimer’s Disease (AD), the most common form of dementia, has grown in recent years,. The BBB is key in regulating influx and efflux of substances to the brain and as such maintains normal neuronal and cognitive function. Alterations in BBB constituent proteins could alter its ability to selectively transport molecules and result in a change in permeability to potentially toxic substances. The list of priority mRNA targets for this project was identified from Figure 2 of Sweeney et al., 2019. This MSc project led to a total of 253 GO annotations being created. This allowed for knowledge describing the role of microRNAs at the BBB to be captured. The prioritised mRNA targets are listed below:

Sandra De Miranda Pinheiro, MSc project 2019. Accumulation of amyloid-beta (Aβ) and tau proteins in the brain is the hallmark of Alzheimer’s disease and lead to neurodegeneration. An imbalance between the production and the clearance of Aβ from the brain is thought to drive the development of the disease. Aβ derives from a larger protein, the amyloid precursor protein (APP), which is processed by different secretases in a sequential way. In the amyloidogenic pathway, β-secretase cleaves APP at the β-site and cleavage of the remaining APP fragment by γ-secretase results in the production of Aβ peptides. Increased APP expression has been associated with an increased risk of developing Alzheimer’s disease. This MSc project led to a total of 254 GO annotations being created. This allowed for knowledge describing how microRNAs regulate the processing of APP and the formation of Aβ. The prioritised mRNA targets are listed below:

Miao Long, MSc project 2020. Alzheimer's disease (AD) is characterised neuropathologically as the presence of intraneuronal neurofibrillary lesions expressing the Tau protein. One of the characteristic pathologies of sporadic AD patients, is hyperphosphorylation of Tau and neurofibrillary tangles. Remarkably, hundreds of microRNAs have been shown to be changed in AD-affected brain regions, with some of them being experimentally demonstrated to regulate tau-related activities. This project focused on capturing the role of microRNAs in regulation of proteins involved in Tau hyperphosphorylation. The mRNA targets identified in this project are listed below: 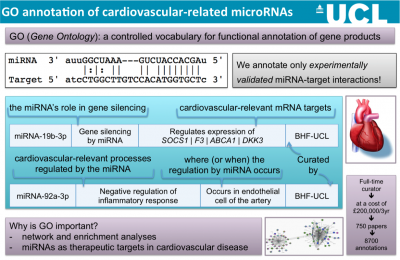