The MRC Unit for Lifelong Health and Ageing at UCL (MRC LHA) was established in 2008 and Nish Chaturvedi has been director since 2017.

The LHA is home to three major studies: 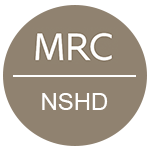 MRC National Survey of Health and DevelopmentThe MRC National Survey of Health and Development (NSHD), the oldest of the British birth cohort studies, is unique in having data from birth on the health and social circumstances of a representative sample (N=5362) of men and women born in England, Scotland or Wales in March 1946. The NSHD has been funded by the Medical Research Council since 1962.

The Southall And Brent REvisited Study (SABRE) is a medical research study involving nearly 5000 European, Indian Asian and African Caribbean men and women. The aim is to highlight ethnic differences in cardiometabolic risk and provide potential explanations for such differences.

The aim of LINKAGE-Camden is to gain further understanding of the development and nature of Delirium but also its potential effects on cognition and memory. Started in January 2017, LINKAGE-Camden is in the process of recruiting people over the age of 70, who are living in the borough of Camden and will be followed up over a 2 year period.