Research is divided into 7 signature programmes and two cross cutting programmes (Chemistry and Imaging Computing) across KCL and UCL. 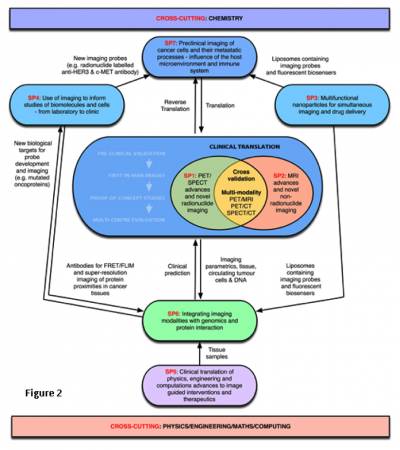 The CCIC is based on seven Signature Programmes:

This translational programme aims to facilitate personalized medicine by exploiting the synergies of novel, multimodality and multi-parametric imaging methods to improve tumour characterisation, treatment prediction and response assessment in cancer patients. The programme will be underpinned by the use of novel tracer and contrast methodology (SP4) and innovative MRI protocols ( SP2 and SP7).

The unique position of the collaborative KCL/UCL centre in the UK is its technical expertise in PET and MRI development and access to the clinical simultaneous PET-MRI: clinical applications of this new hybrid modality will be explored within this programme.

The overall aim of this programme is to develop targeted, self-assembling multifunctional nanoparticles that can simultaneously deliver small molecule therapeutics to primary tumors and metastases, and also deliver optical probes to measure the effects of these therapies at the molecular level. These nanoparticles are designed with appropriate labels for tracking by two or more imaging modalities (PET, SPECT, optical, MR) in vivo. They will be powerful new diagnostic tools that will enable us to answer fundamental questions about the heterogeneity of tumour responses to different treatments. We also aim to take our key EGFR-targeted, nanoparticle-based activity sensing technology, developed in CCIC-I, through to Phase I clinical trials.

SP4: Use of imaging to inform studies of biomolecules and cells – from laboratory to clinic

We aim to harness antibody technologies for imaging and therapy of cancer, developing and exploiting novel preclinical and clinical imaging technologies in so doing. Activities within SP4 fall into three areas: design and production of new antibodies (“antibody toolbox”); preclinical evaluation of antibodies in vivo for clinical use; and antibodies as tissue diagnostics (FRET/FLIM and single molecule imaging). These projects interact with each other and SPs 3, 6, and 7, and with the Chemistry cross-cutting programme. Future clinical evaluation of antibodies will be facilitated by combining the UCL cGMP protein production facility with the KCL cGMP radiochemistry and regulatory team (see Chemistry cross-cutting programme).

This programme integrates a significant body of work undertaken within and in association with the CCIC. Our ambition is to translate at least one new image guided application per year to first-in-man studies. This is a significant engineering challenge requiring establishment of a Quality Management System (QMS) to enable CE marking and clinical trials. This pipeline will benefit from the 3 Wellcome/DoH HICF Smart Surgery awards recently started at UCL in image guided laparoscopic liver surgery, image guided prostate biopsy and focal therapy, and in image guided neurosurgery. This Signature Programme will also draw on novel methodology arising from the EPSRC Programme “Intelligent Imaging: Form, Function and Motion across Scale”, led by Hawkes at UCL in collaboration with KCL, ICR and ICL. The work builds on the Nifty suite of open source Medical Image Computing Tools described in the Computational Imaging cross-cutting programme and in particular facilitates the clinical translation of technologies to be developed within SP2 and SP7.

The combination of imaging and genomics is a constant theme across the whole Centre but SP6 is dedicated to integrating imaging modalities with genomics and protein interaction analysis to understand cancer genome heterogeneity and predict individualised clinical outcome.

As an extension of this work, we have observed that significant correlations exist between some CT image parameters (3D volume) and the HER2-3 dimer quantity determined on tissues from the new EPOC neo-adjuvant cetuximab/oxaliplatin-containing chemotherapy trial (Primrose et al, 2014). Further tissue pathological analyses such as Ki-67 staining are being applied to provide a mechanistic explanation for this correlation. This combined Imaging-genomic-protein interaction analysis is being applied to various trials including LOCATE (prostate), PANTHER (colorectal), the Patritumab Head and Neck Phase II trial, the H2020 MR elastography based programme ‘FORCE’ (breast) and the VALIANT (prostate) in the near future.

In lung cancer, we are using imaging to analyse the subclonal tumour evolution during tyrosine kinase inhibitor (TKI)-resistance in EGFR activation-mutant adenocarcinoma of the lung. This project aims to associate multiregion tumour genomic data generated through whole exome sequencing as part of the TRACERx project with radiomics features extracted from patient CT-PET scans. Genomics features include measures of intratumour heterogeneity (ITH), subclonal evolution and specific actionable genomic aberrations such as mutations in the EGFR gene or the MAP kinase pathway. Furthermore, as patients relapse and receive targeted therapy through the associated DARWIN-I and DARWIN-II clinical studies which are on track to open up patient recruitment in the near future, follow-up scans will be analysed to investigate if resistance can be observed and tracked using a radiomics approach. If successful, automated radiomics analysis of tumour CT-PET scans may be used to rapidly and at very low cost assess the degree of ITH, and possibly to identify likely driver mutations from macroscopic image-based features.

SP7: Imaging cancer cells and their metastatic processes – influence of the host microenvironment and the immune system.

We aim to advance biomedical imaging to map the tumour microenvironment and its inherent heterogeneity, with precision and specificity. Measuring changes in the microenvironment of solid tumours is key to detecting and characterising tumour pathophysiology, in particular precursors to metastasis, and for assessing the distribution of therapeutic agents and a physiological response to therapy. SP7 brings together recent methodological developments offering an important new approach to investigating tumour biology.

Specifically in SP7 we are:

Underpinning all SPs will be two key cross-cutting disciplines in the proposed Centre: