The CRUK UCL Centre supports the next generation of cancer researchers through their academic and clinical careers by providing clinical and non-clinical PhD studentships. 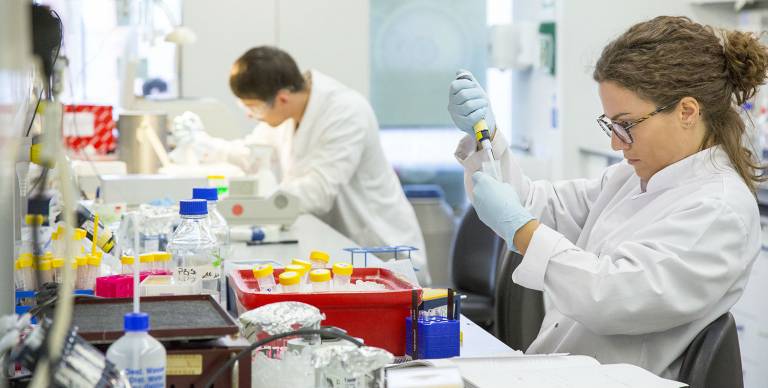 Education is a vital part of the vision of the CRUK UCL Centre. Each year we recruit the most talented students and clinicians to embark upon PhD studies across a broad spectrum of cancer related research areas. Some cancers, such as lung and brain cancers, have been particularly difficult to treat and have poor long-term survival for patients. Training the next generation of academic clinicians and research scientists to produce world-class research and translate this for the benefit of patients is at the heart of this strategy.

Our research students have access to state-of-the-art core research facilities, patient samples and data from our partner hospitals, clinical trials centres, and a Bioinformatics Centre (BLIC). We also offer an array of skills and training opportunities away from the bench. These include research seminars with leading scientists, specialist journal clubs, student research presentations and poster sessions, and the opportunity for students to travel to national and international conferences to present their work.

Although most cancer cells actively proliferate, a rare subset of cells with stem-like properties and increased tumourigenic potential can remain quiescent for extended time. Since most cancer treatments only target dividing cells, quiescence represents a major therapeutic challenge. Indeed, in many tumour types quiescent cells are the key substrate of relapse and further disease evolution. The mechanisms controlling quiescence remain largely unknown, and transcriptomic analysis of quiescent cells has yielded only limited insights. This might be at least partly due to i) quiescent cells having globally reduced transcriptional activity, ii) poor overall concordance between transcript and protein expression, and (iii) the importance of post-translational modifications in signal transduction, particularly in processes such as the cell cycle.

This CRUK UCL Centre PhD studentship will investigate the proteome of quiescent cancer cells, focusing on leukaemia and glioblastoma, to provide new insights into quiescence regulation and guide the development of new therapeutic strategies aimed at their eradication. This collaborative project between the Stem Cell Laboratory and the Proteomics Research TTP will employ and further develop: (i) techniques for isolating cancer cell subsets, (ii) sample preparation methodologies for ultra-low protein input, (iii) sensitive discovery and targeted mass-spectrometry techniques, and (iv) computational data analysis workflows. Proteomic findings will be integrated with available genomic, transcriptomic, epigenetic, and metabolic descriptions of quiescence.

The PhD project will focus on how cancer associated mutations cause replication stress and identify proteins involved in the tolerance to replication stress. Understanding these processes in cancer cells will allow us to specifically target cancer cells without harming healthy cells. During the project the student will develop skills in a wide range of molecular and cellular biological techniques, including extensive microscopy work and potential drug discovery. Insight into the role of replication stress in causing and curing cancer will help guide the use of existing cancer treatment and identify novel cancer drug targets, providing better cancer treatment, which will benefit patients and their families.

The PI3K/PTEN signalling axis is one of the most frequently aberrantly-activated pathways in cancer. PTEN is a tumour suppressor gene, the loss of which leads to PI3K-pathway over-activation.

PI3K-inhibitors have not been very effective as anti-cancer agents in the clinic, with the exception of the approved PI3Kδ-inhibitors for B-cell malignancies. This indicates the need to better understand the mechanisms by which sustained, low-level PI3K-activation leads to cancer and to explore alternative ways to use PI3K-inhibitors in the clinic beyond their use as potential direct anti-cancer-cell cytotoxics/cytostatics used at the maximum-tolerated dose.

The project objectives are: (1) to investigate the possible contribution of sustained inflammation to cancer predisposition, and (2) to explore alternative uses of clinical-stage PI3K-inhibitors in cancer prevention and cancer immunotherapy.

The immune system plays a key role in controlling cancer and recent clinical trials have demonstrated that enhancing anti-cancer immunity can result in dramatic improvements in patient outcome and survival. However, not all patients respond to these forms of treatment and we need to understand why.

In this project, the student will study the T lymphocyte immune response against non-small cell lung carcinoma. The project tests the hypothesis that many T lymphocytes, each with a different antigen receptor for tumour (known as a poly-clonal response), can co-operate to deliver a more effective anti-tumour response, than a response made up of only one or a few types of T cell (known as a monoclonal response). The student will have access to a unique set of genomic and immunological data arising from the TRACERx study, which collects sequential tumour and blood samples from a large cohort of lung cancer patients post-surgery.

The project will provide training in cutting edge technologies in molecular and cellular immunology (including NextGen sequencing, multi-parameter flow cytometry and genetic modification) together with the advanced computational and bioinformatic skills needed for analysis of the large data sets these methods generate.

Age is by far the biggest risk factor for cancer – nearly 90% of new cancer cases are diagnosed in people over the age of 50. This is due to the accumulation of damage to DNA over a lifetime. But the relationship between ageing and cancer is not fully understood. Traditional animal models aren’t suitable to study cancer in the context of ageing – worms and flies lack the right anatomical structures, while mice and zebrafish live for several years, meaning research takes too long.

This project uses a new model organism, the short-lived African turquoise killifish, which uniquely as a vertebrate ages rapidly, exhibiting a lifespan of only four to six months. It also features many hallmarks of ageing in common with humans – including the development of spontaneous cancers.

The project will develop tools using genome editing to model blood cancers and age related phenomena in blood stem cells, with the goal that advancements in our understanding of cancer in the context of ageing and may open fresh avenues for research into its prevention and treatment.

Despite recent progress, T-ALL remains a challenging clinical problem with an unmet clinical need for novel therapies. Given the success of anti-CD19 CAR and other agents in B-ALL, development of comparable immunotherapeutic strategies for T-ALL is highly desirable. Preliminary work shows that CD21, an antigen normally restricted to B-lymphocytes and follicular dendritic cells, is expressed in several T-ALL cell lines and in a significant proportion of primary T-ALL cases.

This project will validate CD21 expression in T-ALL and normal tissues; explore the biology behind CD21 expression; develop an optimised CAR against CD21; perform preclinical testing of anti-CD21 CAR in vitro and in small animal models, in preparation for a potential clinical trial.

The main objective is to investigate how anti-EGFR therapy-induced ErbB/HER dimer formation can in turn influence the tumor microenvironment, focusing on unfolded protein response- based mechanisms that can modulate the adaptive and innate immune effectors in the tumour microenvironment. The eventual aim is to derive stratifying markers that can allow to select patients for anti-EGFR/immunotherapy combination therapy. State of the art molecular imaging (Science 283, 2085-2089 (1999); Science Signaling 7, ra29 (2014); Oncotarget 7, 51012-51026 (2016); ACS nano (2016)) will be combined with sensitive digital droplet PCR and immunological techniques to assess how therapy-induced dimer formation relates to immunological regulation in lung cancers.

Prostate cancer is a highly heterogeneous disease with a variable clinical course. It remains the second highest cause of cancer death in men in the UK. The STAMPEDE cohort is a unique population of men diagnosed with metastatic or high risk localised hormone sensitive prostate cancer starting long-term androgen deprivation therapy (ADT), randomised between a number of experimental treatments including docetaxel or abiraterone. The addition of docetaxel or abiraterone to ADT was demonstrated to confer a survival benefit and are now standard of care. However, identifying patients who will benefit most from either treatment strategy is a major unmet clinical need that could be addressed using a tissue based genomic biomarker.

A high proportion of patients participating in the STAMPEDE trial have given consent for tissue obtained as part of routine clinical care (for diagnostic purposes) to also be used for research-based molecular studies. This project funded by Prostate Cancer UK and Cancer Research UK addresses the challenge of utilising formalin fixed paraffin embedded archival tissue from STAMPEDE trial participants to comprehensively genomically characterise hormone sensitive prostate cancer and identify prognostic and predictive molecular biomarkers for implementation into clinical practice. This work is being performed in the ‘Treatment Resistance Research Group’ led by Prof. Attard, who receive funding from the John Black Charitable Foundation.

Solid tumours comprise mutated cancer cells, stromal fibroblasts, and multiple immune cells. While each of these cell-types can contribute towards cancer, how they collectively interact to support tumours is poorly understood. The Cell Communication Lab at UCL Cancer Institute (www.tape-lab.com) uses custom single-cell signalling technologies to investigate how heterotypic cell-types communicate in colorectal cancer (CRC). While we have been very successful in generating single-cell signalling data from multicellular cancer models, a major bottleneck of this approach has been the limited computational tools available to analyse such unique data.

Lung squamous cell carcinoma (LUSC) accounts for around one third of lung cancer cases and is postulated to develop through a step-wise process from pre-invasive lesions in the bronchial epithelium. However, only around half of pre-invasive lesions progress to invasive cancer, while the rest remain stable or even regress. Patients are most likely to survive if the disease is discovered and treated early in its progression. The Janes laboratory has begun to identify clinically relevant biomarkers of high-risk pre-invasive lung lesions. Current work in the lab aims to discriminate those biomarkers that may not only serve as prognostic tools, but also as therapeutic targets.

This CRUK UCL Centre PhD studentship will examine the functional consequences of some of the very first molecular alterations identified in pre-invasive lung lesions in physiologically-relevant experimental contexts, and investigate potential strategies for early intervention or prophylactic therapies targeting such changes. We will use a collection of primary airway epithelial cell lines from the histologically normal bronchial epithelium of smokers and non-smokers that have been established by the Janes lab and are amenable to CRISPR-based gene editing, in combination with pharmacological modulators of key signalling pathways developed by Vanhaesebroeck lab. Our in vivo studies will combine models developed by both our laboratories that recapitulate LUSC progression and allow controlled manipulation of specific PI3K family members.

It is increasingly becoming clear that the microenvironment is key to determining whether or not a tumour will develop. The Lloyd lab has developed a novel mouse model that has key implications for our understanding of the critical role of the microenvironment in determining whether tumour develop in patients with Neurofibromatosis Type 1 (NF1), a tumour predisposition syndrome in which patients develop multiple tumours in the nervous system. Understanding the early microenvironment signals that promote the formation of these tumours could have important clinical implications by identifying mechanisms to persuade the tumour cells to revert to more normal behaviour.

For this project, using a combination of molecular, imaging and in vivo studies, the aim is to identify the mechanisms by which signals in an injured microenvironment promote the development of these tumours and determine the potential of developing therapeutics based on these findings.