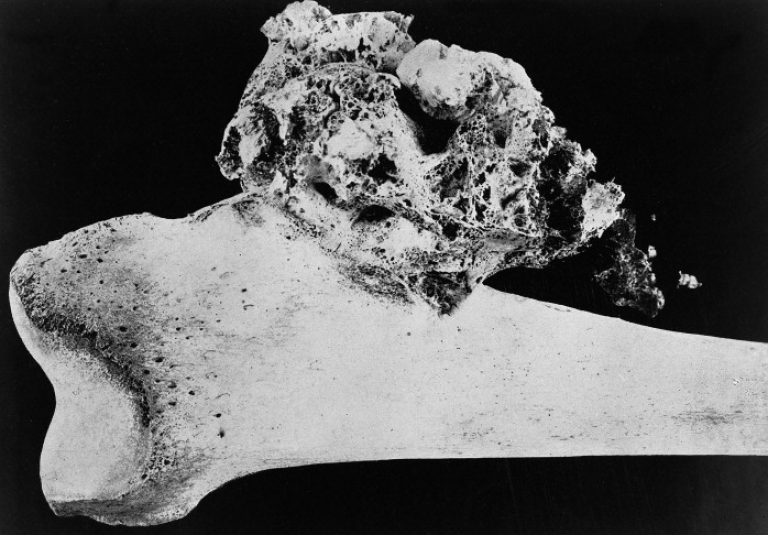 A subgroup of patients with osteosarcoma - a form of bone cancer - could be helped by an existing drug, suggest scientists from the Wellcome Trust Sanger Institute and their collaborators at University College London Cancer Institute and the Royal National Orthopaedic Hospital NHS Trust.

In the largest genetic sequencing study of osteosarcoma to date, scientists discovered that 10 per cent of patients with a genetic mutation in particular growth factor signalling genes may benefit from existing drugs, known as IGF1R inhibitors.

The results, published today (23 June) in Nature Communications suggest a re-trial of IGF1R inhibitors for the subset of patients with osteosarcoma who are likely to respond based on their genetic profile.

Osteosarcoma is the most common form of primary bone cancer in children and young adults, usually affecting people aged 10 to 24 years*. 160 new patients are diagnosed with osteosarcoma in the UK each year, of which around one third cannot be cured.

In the study, scientists analysed the genome of 112 childhood and adult tumours - double the number of tumours studied previously. In 10 per cent of cases, the team discovered cancer-driving mutations in insulin-like growth factor (IGF) signalling genes.

IGF signalling plays a major role in bone growth and development during puberty. Researchers believe that IGF signalling is also implicated in the uncontrollable growth of bone that is characteristic of osteosarcoma.

Dr Sam Behjati, first author from the Wellcome Trust Sanger Institute and University of Cambridge, said: "Osteosarcoma is difficult to treat. Despite extensive research over the past 40 years, no new treatment options have been found. In this study we reveal a clear biological target for osteosarcoma that can be reached with existing drugs."

In the study, scientists looked for mutations in the tumours to understand the mechanism of osteosarcoma development. The genetic information revealed a specific process for rearranging the chromosomes that results in several cancer-driving mutations at once.

Professor Adrienne Flanagan, senior author from the Royal National Orthopaedic Hospital NHS Trust and University College London Cancer Institute, said: "By sequencing the whole genome of the tumours, we have unpicked the mechanism behind osteosarcoma for the first time. We discovered a new process -chromothripsis amplification - in which the chromosome is shattered, multiplied and rejigged to generate multiple cancer-driving mutations at the same time. We believe this is why we see very similar osteosarcoma tumours in children and adults, which are not the result of ageing."

Dr Peter Campbell, lead author from the Wellcome Trust Sanger Institute, said: "Currently, there are no new osteosarcoma treatments on the horizon. Genomic sequencing has provided the evidence needed to revisit clinical trials of IGF1R inhibitors for the subset of patients that responded in the past. The mutations of patients' tumours may enable clinicians to predict who will, and will not respond to these drugs, resulting in more efficient clinical trials. The drugs could be effective for 10 per cent of osteosarcoma patients."