Early this year, researchers at UCL and the Universities of Leeds, York and Sheffield developed videos showing for the first time how small circles of DNA adopt dance-like movements. UCL researcher Kavit Main, talks about how these stunning molecular images were captured. 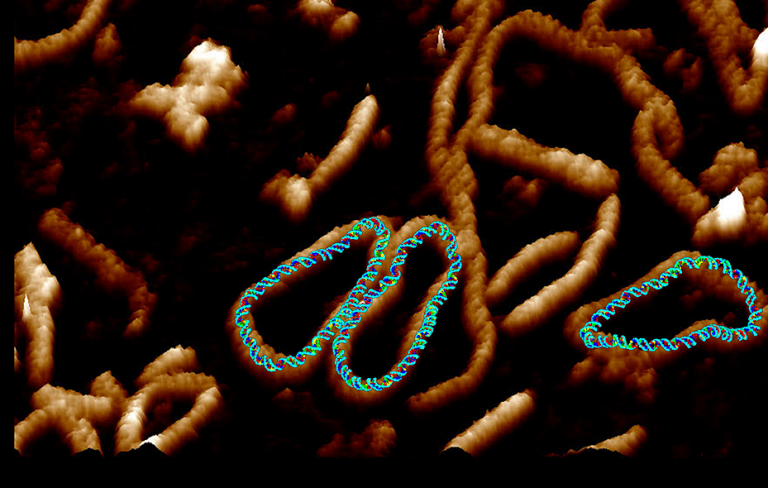 The footage is based on some of the highest resolution images of a single molecule of DNA ever captured, with DNA seen to “dance” in microscopy data recorded at the London Centre for Nanotechnology at UCL, and at the AFM manufacturer Bruker’s headquarters in Santa Barbara, California.

In the cell, DNA is arranged into highly-organised and supercoiled structures. Much is known about the molecular profile and function of DNA, however scientists are unclear about how this supercoiling affects the detailed double-helical structure of DNA, largely because of limitations in capturing images with a high enough resolution.

The images are so detailed it is possible to see the iconic double helical structure of DNA, but when combined with the simulations, the researchers were able to see the position of every single atom in the DNA and how it twists and writhes.
UCL PhD student, Kavit Main, performed the atomic force microscopy alongside his PhD supervisor and lead co-author of the study, Dr Alice Pyne (University of Sheffield and the London Centre for Nanotechnology at UCL).
“We often think of DNA as being a rigid, linear molecule but in reality, cellular DNA is complex and twisted. Through a combination of atomic force microscopy (AFM) and molecular dynamic simulations we have been able to observe, for the first time, how flexible and dynamic these individual twisted DNA molecules are, at unprecedented resolution,” says Kavit.
“AFM is a powerful imaging technique that uses a sharp tip to contour the surface of a sample, like the tactile reading of braille. We exploited AFM’s high spatial resolution capabilities and the ability to image in a fluid environment, to probe individual DNA minicircles under different levels of superhelical stress. We visualised how supercoiling not only compacts DNA structure but also relaxes it through the formation of defects in the axis.”
“This research has improved our fundamental understanding of how DNA structure and mechanics are affected by supercoiling but also has wider applications in the engineering of DNA nanostructures as therapeutics. By combining AFM and MD simulations, we have demonstrated a way to amplify the resolution of DNA structural studies to investigate topologically complex DNA molecules in situ.“