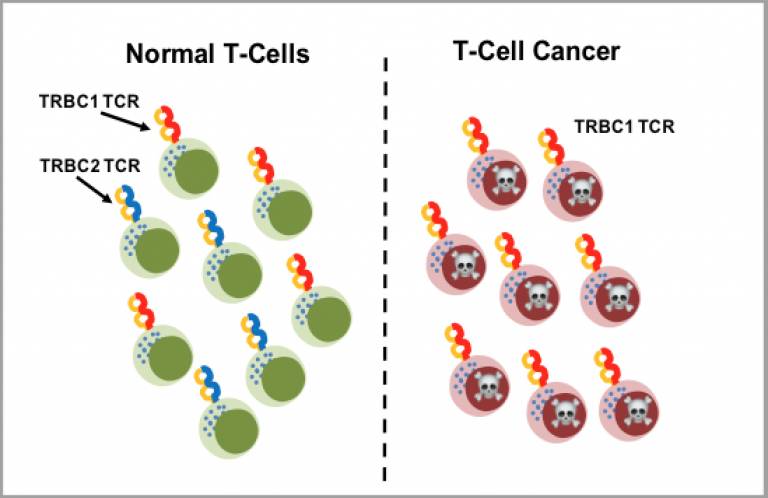 The findings could lead the way to significantly improving outcomes for patients with mature T cell lymphomas and leukaemia - diseases that are typically aggressive, treatment resistant and associated with poor prognosis

Lymphomas and leukaemias arise from the body’s B or T cells - both types of white blood cell. While significant advances have been made in treating B cell cancers with immunotherapies, there hasn’t been the equivalent progress with T cell cancers. This is largely due to the fact that immunotherapy for B cell cancers works by wiping out all B cells, which the body can tolerate. However, the same is not true for T cells - eliminating these would be fatal. Consequently, it’s a more complex task to find a type of immunotherapy that selectively targets some T cells and not others. But that is exactly what the research team, from the laboratory of Dr Martin Pule in UCL Cancer Institute, think they might have achieved.

"T cell cancers are rarer than B cell cancers but they tend to be much worse in terms of outcome, especially if the disease is relapsed or refractory, ” explains Dr Paul Maciocia, lead author of the study and Academic Clinical Fellow and Lecturer in Haematology at UCL. “If you look at what proteins you might target on T cell cancers - as the basis of a therapy - then the most common one is the T-cell receptor (TCR).”

“The T cell receptor is what each individual T cell uses to identify pathogens. There are billions of unique T-cell receptors found on your individual T-cells and each one of them will target something different, like a protein found on a virus or bacteria. But we’ve realised that there’s a part of the T cell receptor that’s constant – or rather, almost constant. It is in this region that two different versions of the same gene are found: Beta constant 1 (TRBC1) and Beta constant 2 (TRBC2).”

Crucially, each T cell (and therefore each T cell cancer) irreversibly ‘selects’ either TRBC1 or TRBC2.

Dr Maciocia continues: “In a population of normal T cells, although all the cells have unique T-cell receptors, each cell will express either TRBC1 or TRBC2, and the population will be a mix of both (approximately a third will be Beta-1 and two-thirds Beta-2). However, a cancerous T-cell population will not be mixed. The cancer arises from one malfunctioning T-cell that has replicated, so all the cancer cells will have either TRBC1 or TRBC2 present. It is this commonality that we can exploit.”

However, both the TRBC1 and TRBC2 proteins are virtually identical. In order to target one or the other, the study team first needed to find an antibody that would recognise the difference. Fortunately, one had already been developed by Imperial Cancer Research Fund (ICRF) scientists over 20 years ago - this particular antibody can recognise TRBC1.

The team used this long-forgotten antibody to make an immunotherapeutic, in this case CAR T-cells (manufactured T-cells that are engineered to recognise and target specific proteins on cancer cells).

“In lab tests, we showed that the CAR T-cells we developed, could selectively kill TRBC1 tumour cells, while leaving behind plenty of healthy T cells to fight infection. Currently, this is the only therapeutic approach we know of that can do this; any other immunotherapy that has been suggested for T cell lymphoma, or T-cell malignancies in general, would pretty much wipe out all normal T-cells,” says Dr Maciocia.

Commenting on the publication, Dr Julie Vose, Chief, Division of Hematology/ Oncology, Professor of Medicine, Nebraska Medical Center said: “T-cell lymphomas are blood cancers characterized by a very poor prognosis, particularly after a patient relapses following initial treatment. Unlike other blood cancers, it is not possible to use agents that totally remove all of the cell-type containing the malignancy as T-cells are needed to fight infections. This highly innovative approach addresses this challenge elegantly by selectively removing the portion of the T-cells containing the cancer while leaving a healthy T-cell population intact to provide protection against infection. Consequently, it offers real promise as a potential treatment for this aggressive form of cancer.”

The next stage should see phase I clinical trials starting in early 2018 and research into targeting TRBC2 is in the pipeline.

This work was supported by grants from Cancer Research UK, the Kay Kendall Leukaemia Fund and Innovate UK.