A UCL academic who helped refugees escape from Nazi-occupied Czechoslovakia has been honoured with the unveiling of a plaque commemorating her courage and humanity. 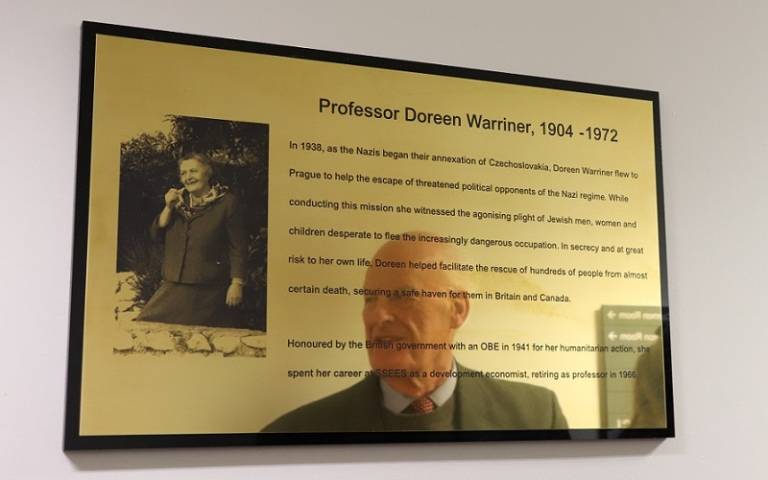 A UCL academic who helped refugees escape from Nazi-occupied Czechoslovakia has been honoured with the unveiling of a plaque commemorating her courage and humanity.

Doreen Warriner, a development economist in the School of Slavonic and East European Studies between 1938 and 1966, interrupted her career at UCL to work as the Prague representative of the British Committee for Refugees from Czechoslovakia. To mark Holocaust Memorial Day, her nephew Henry Warriner visited UCL to speak about her life and unveil the plaque in her honour.

“She realised before most people that food, coal and blankets were only a panacea,” he said. “It was essential to get people out of the country.”

Praising her powers of persuasion and organisation in arranging visas, exit permits and transport, he added:

“The sense of impending doom in Prague contrasted with the bureaucratic lethargy in London, and refugees were not greatly wanted. Then unemployment was given as a reason; now there are other reasons but little really changes.”

Doreen was awarded an OBE in 1941 for her work with refugees, and in 2018 Henry collected a Holocaust Memorial Medal on her behalf at a ceremony in the Foreign Office.

“She would have been very proud of that recognition,” he said, before concluding:

“I knew Doreen well and I am quite sure that this memorial at UCL, where she spent much of her working life, would have given her more pleasure than any other possible recognition.” Holocaust Memorial Day at UCL was also marked with a lecture by Professor Mary Fulbrook, one of the world’s leading scholars of twentieth century German history, exploring the extent to which perpetrators of the Holocaust were able to evade justice in the post-war period.

“I don’t think memorialisation of victims is enough,” she concluded. “How do you achieve justice after such mass injustice? And how do we find ways to ensure that the majority of people do not stand by and do nothing?”

The lecture, which was based on her Wolfson History Prize-winning book Reckonings: Legacies of Nazi Persecution and the Quest for Justice, can be watched online here:

Following the lecture, guests joined a reception to find out about UCL’s Centre for Holocaust Education, a specialist institute supporting teachers to deepen students’ understanding of and engagement with the Holocaust. Sir Trevor Pears, Executive Chair of the Pears Foundation which supports the Centre and has also championed the plaque for Doreen Warriner, said:

“Pears Foundation is very proud to support UCL’s Centre for Holocaust Education and its vital partnerships with schools to ensure that students are learning about the Holocaust in an accurate, meaningful way based on evidence and research. This series of events at UCL underlines the value of integrating the Centre within a multidisciplinary university, where world-class scholarship can feed directly into how and what is learned in schools so that, seventy five years after the end of World War II, we all remain alert to the causes, consequences and legacy of the Holocaust. I’m also delighted to see the personal heroism of Doreen Warriner recognised.”