Rising to the challenge since 1962

Whether you watched religiously or not, University Challenge has become a synonymous part of UK university life. But what was it like for the UCL students who participated in the challenge? Three alumni give us a sneak peek behind the scenes. 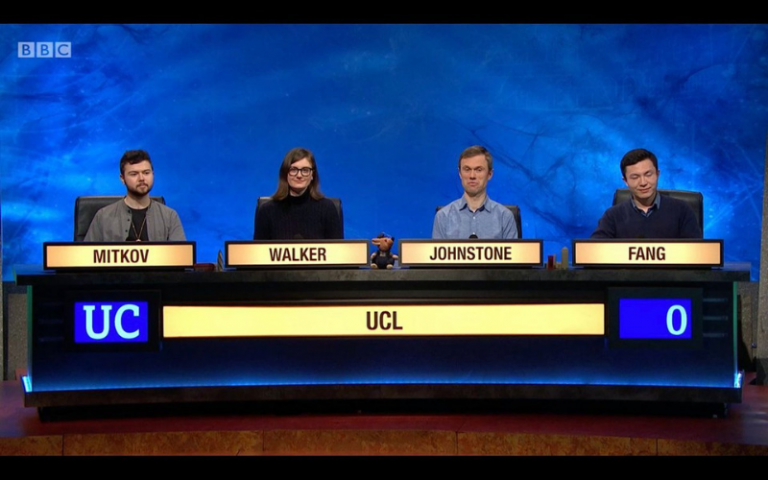 There are few British TV programmes as iconic as University Challenge. The theme tune, the split-screen view, the announcers and even the distinctive sound of the buzzers are etched into our collective consciousness. The notoriously tough quiz show has had front rooms across the country shouting answers at the screen since 1962, and over the years we’ve seen many either crack or thrive under the pressure of being quizzed by Jeremy Paxman or his predecessor Bamber Gascoigne.

The first UCL team was listed in the 1962 academic year, and since then a total of 22 teams have competed. In 2005 and 2013, UCL took the runner-up titles against some fierce competition, and we’ve made it to the quarter finals four times. Plus, a UCL player joint-holds the record for longest surname called out by announcer Roger Tilling: Adam Papaphilippopoulos (2012/13).

For many who appear on the programme, it can be so much more than a quiz show, so let’s take a peek behind scenes to find out just what University Challenge has meant for some former UCL competitors. You might be surprised!

Rob Johnstone was captain of the 2018 UCL team, when he was studying for a one-year master’s degree (MRes) in Medical Imaging. He remembers the surprise of being chosen, “I had just gone along to the selection rounds for a bit of fun and to get involved in UCL student life. I never really expected to make it into the team.”

He says: “The student union organised a series of trials for the team. I had only been at UCL for two weeks when I went to the first selection round. There were two rounds of 100 written questions, to narrow the field to 15 people. A buzzer round followed, all in the student union café. Competing against 14 other people was a stressful experience, but it was a good way to select those of us who could be quick on the buzzer, as well as having the knowledge.”

Katie Bramall-Stainer was captain of the 2001 team and studying medicine at the time. After a failed attempt to make it on the show with a less than enthusiastic team, Katie took matters into her own hands. She says: “In the year that we did it, I was general secretary of the union and I’d already made a big hoo-haa with the sabbatical officers of the previous years about how important it was for UCL to put a team forward. I think it’s really important publicity, so it was taken a lot more seriously the year that we were on it.”

Katie’s team was made up of Lucy Brant, who was studying for a BA in Ancient World, sabbatical officer Laura Emson, who had done a degree in chemistry at UCL, and masters student David Marsh, who was also working for The Guardian newspaper at the time.

She adds: “It was quite unusual to have three women on the team back then so it was nice to see a bit more diversity.”

How do you revise for general knowledge?

Preparing for University Challenge presents one very simple problem – how exactly do you cram when you’ve got no idea what questions are coming your way?

Chris Mackett featured on the 1972 team when he was in his second year studying International Relations. His team had a simple approach to preparing for the show: “I can’t recall doing any revising! The scope of potential questions was so wide, there didn’t seem much point.”

In contrast, Katie recalls her team took the preparation very seriously. She says: “I was quite a hard taskmaster. We did a huge number of pub quizzes and prepped a lot, I made sure that we had copies of previous ‘starters’ and ‘bonuses’. We got all the old quiz books too. We worked hard but we had a great time doing so.” 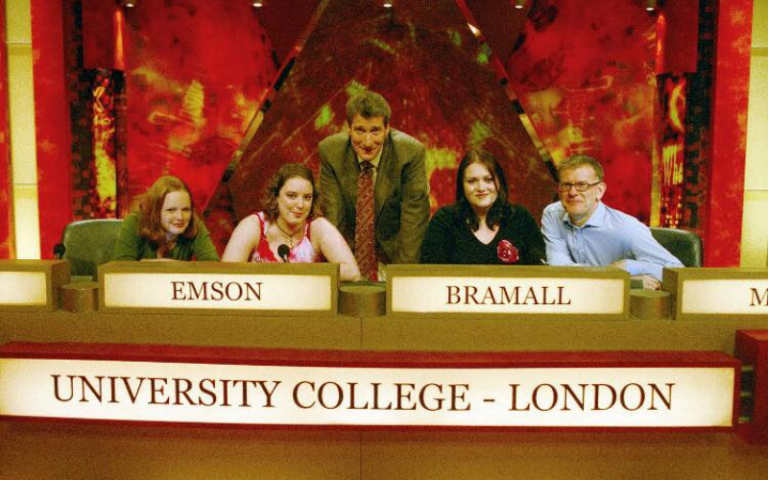 Regardless of how much you prepare, arriving at a television studio is a daunting experience – but it’s even more so when you’re about to ‘quiz off’ against some of the brightest students in the country. Katie’s team managed to fully embrace the experience. She says: “Because David was involved with The Guardian, he wrote it up for a piece, “In The Know”, and it was published to coincide with our first appearance on the show.

“We brought up loads of people from the union and had a great turnout for UCL. There was lots of whooping for us during the broadcast.

“We won our first round against Cardiff and won a second round pretty convincingly against Trinity College Cambridge with quite a high score. I think we almost scored 300. And then we went back for the quarter finals, and we lost on the last starter against Christ College Cambridge. It was a Caribbean cricket question, and David buzzed in with the wrong answer. I haven’t spoken to him since… ”, she laughs.

Chris’s team managed the feat of appearing twice on the show, without winning a round. He explains: “The first time we were on, we lost by five points to Keble College, Oxford, who went on to win the series. But there was a query over one of the questions, so we were asked back later the same year for the beginning of the new series when we lost to the University of Glasgow.” Chris Mackett and his team at the 1972 University Challenge.

Rob kicked off the 2018 UCL campaign with a rotten cold so had to battle through with cough sweets on hand. He says: “We met the KCL team on the train to Salford for our first round match. At that stage we didn’t know we would be competing against them in the first round. Our universities are great rivals of course, but the rivalry between our teams was a friendly one and we took turns taking team photos by the Salford docks, before going into the studios.”

Rob’s 2018 team beat KCL in the closely fought, first round match, but were pipped to the post by Edinburgh in the second round match.

Whether your team is successful or not, competing on University Challenge can create quite a stir and forge some strong bonds.

Chris’s parents went out and bought a colour TV just to watch the 1972 team in their bid. He adds: “And when we got home, the Students’ Union presented all the team members with tankards inscribed ‘University Challenge 1972, played two, lost two.’”

Rob’s 2018 team actually forged good friendships with ‘the enemy’… he says: “We got to know the KCL team after beating them in the first round. Despite the historical rivalry between our institutions, we got on well and, back in London, we met up on a couple of occasions to have ‘friendly’ matches against each other before the second round.”

“But perhaps the biggest impact the quiz show has had is on Katie. She says: “It was wonderful and quite helpful actually, because I had a bit of a crush on the captain of the Oriel Oxford team who had been on the show when I was in my second year. And, as it happens, said captain had a bit of a thing for me when I was on the TV too.

“One weekend, I rocked up to the national student quizzing association in Oxford with a few of my teammates and met said captain. And we’re now married with two kids!

“We’ve both done loads of quiz shows since. I won the fourth series of Only Connect – I’m the only female captain to have won a series. And my husband won the first series. There was a ‘champion of champions’ show which ended up as Stainer vs Stainer so that was fun. We now have matching trophies!

“There’s a nice framed picture of both of us in our University Challenge teams above the telly. So quizzing has ended up being quite a significant part of our lives. I’d love to do more of it, but he’s one of the best quizzers in Europe so he gets to do a lot of the competitive quizzing.”

More than just a quiz show

Competitive quizzing aside, getting involved with University Challenge can really help you get noticed in your future career path. Katie believes that her involvement with the show has lead to interesting interviews and job prospects.

She says: “I had an amazing time at UCL, and this was a really huge part of it. It’s also a great thing to have on your CV and it’s opened loads of professional doors for me. It’s been a thoroughly positive experience which I’d recommend to anyone.”