With the new student centre set to open on February 18, we spoke with two alumni who have been instrumental in bringing the project to life. 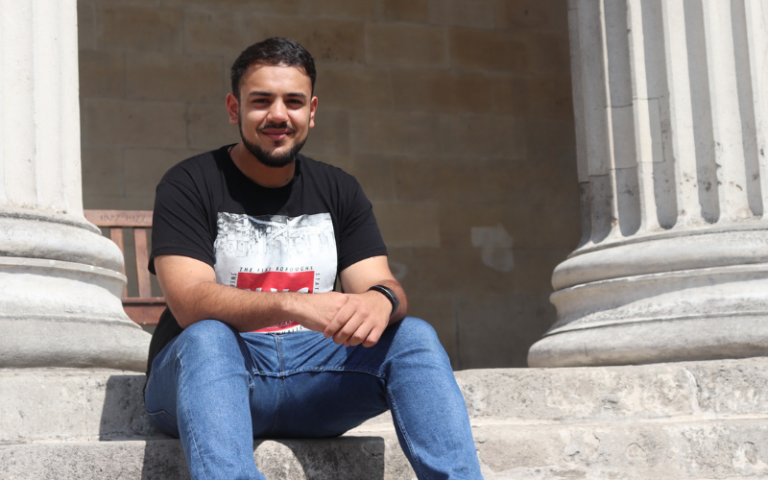 The new Student Centre is a brand new building, designed from the ground up with student needs and the student experience at its heart. It provides practical support with a new Student Enquiries Centre and 1,000 new study spaces, radically improving the way you move and learn on campus.

The sustainably designed and built new Student Centre will be a focal point for study, events and student life - an essential space to think, explore, collaborate, discover and challenge. It will be open 24 hours a day, seven days a week, every single day of the year.

With the experience and needs of future students at its core, the new Student Centre has also been shaped by two former students who contributed to and helped to shape the project. As the centre prepares to open its doors on the 18th February, we heard from Hamza Jamshaid, former Sabbatical Officer and Sophie Morris, Graduate Construction Manager with Mace Group about their involvement.

Hamza Jamshaid graduated from UCL in 2017 in Mechanical Engineering. He then took the seat of Democracy, Operations and Community Officer in the UCL Students Union from 2017-18. The role has a broad remit of finance, governance and operations which included the overseeing of projects like the new Student Centre.

He regularly attended the project board which was chaired by Professor Anthony Smith, Vice-Provost (Education and Student Affairs), and brought together the project managers from Mace and key stakeholders from UCL including the sabbatical officers.

“Hamza said: “I worked closely with the Vice-Provost and his team [in 2018] on the finer details of how to structure the NSC including which study areas would go where, what kind of furniture we’d have and the themes we wanted to look at.”

A key part of Hamza’s role in the final stages of the project was to bring together the interests and priorities of all the students.

“The union has seven officers and everyone has their own remits and priorities. We would have meetings before going into the NSC meetings and collectively figure out what we wanted as a Student's Union and what our collective vision was. Each officer could feed their own narrative into the agenda and highlight the interests of the students they represent. I was, therefore, able to walk into each meeting with an idea of what we, as sabbatical officers, wanted to achieve.”

As a student for four years, Hamza is only too aware of how important the new Student Centre will be for students.

“Coming into university during the exam season you would find the science library, for example, would be full of students and even if you were 20 minutes late, you wouldn’t get a seat so the need for space was always there. Whilst it has been frustrating to have the south exit of the campus shut for the construction site, we know that we are going to be getting a thousand seats from the NSC and I think it was at this point that many students appreciated how big the project was. Looking ahead to when it opens, it will be a really great resource for students.” 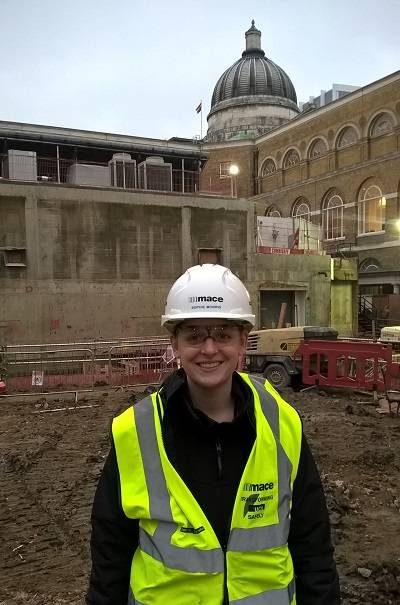 Sophie Morris (pictured left) graduated from UCL in 2015 with a Master's Degree in Civil Engineering (MEng) and joined Mace Group as a Graduate Construction Manager in September 2016. As a former student, she recalled how pleased she was to start working on a project that had been "designed with student learning in mind."

Sophie said; "I originally wanted to do architecture but then realised that I wanted to better understand how to build things, rather than just draw the buildings. I enjoy watching the project evolve under my eyes. Every day on site is different and it's a great feeling to be a part of it."

Reflecting on the new Student Centre, Sophie said; "It is so important for UCL to have a landmark building in this sense. It is also good to see how the building can make use of space by improving access from the north to the south side of the campus, helping people study. If UCL is going to be at the top of the rankings, we're going to need to have the facilities and space, as well as make sure that they are sustainable."

The sustainable features of the Student Centre design include approximately 400m2 of photovoltaics (electric solar panels) on the roof providing clean, renewable energy, as well as 'free' summer cooling using a ground source borehole system that would allow any excess heat contained within the Centre to escape to the colder ground. There is a projected 35% reduction in building carbon emissions compared to regulations requirements.

Working on site, Sophie is experiencing first hand some of the challenges of being in a central campus location surrounded by student activity.

“Sophie said: "I don't think I've ever been on a site where you feel so part of something else - students have even walked into the site office thinking it was their lecture! Being able to work with the students and all key stakeholders is really important.

"The Mace team wants to reduce the effects of noise and keep disruption to the minimum but we realise that sometimes the changes due to the construction works can be difficult to understand. I think it is important to remember that the work is necessary and proves the university is looking forward and thinking about how it can benefit students and staff in the long term."

The Student Centre opens its doors to students on the 18th February and will be officially opened by UCL President and Provost Professor Michael Arthur on the 28th February.

The new student centre was supported by a generous group of UCL alumni and friends. Students and the new student centre are a priority project for the It's All Academic campaign – UCL’s most ambitious philanthropic and engagement campaign. If you would like to support the centre, please click here.

Student Centre
It's All Academic Campaign