£100m secured for UCL East as part of East Bank

UCL has secured £100 million from the Government towards the capital cost of building our new campus, UCL East. 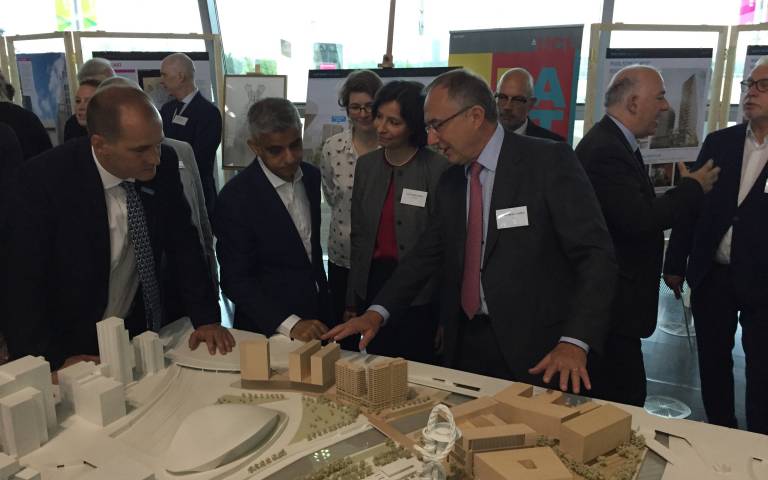 The final confirmation of the funding was announced as President & Provost Professor Michael Arthur showcased UCL East and our current east London projects during a launch event hosted by the Mayor of London to unveil the vision for East Bank (previously the Cultural and Education District).

East Bank will be a new destination for London with world-class culture and education at its heart. As one of the founding partners – along with UAL’s London College of Fashion, Sadler’s Wells, and the V&A including a partnership with the Smithsonian Institution – UCL is receiving the majority share of the Government’s £151m contribution to the project.

Professor Michael Arthur, UCL President & Provost, said: “As one of the world’s leading universities, we address many of the most pressing global challenges of our time. UCL East will take this one step further.”

“Our new campus will bring together seven UCL faculties to generate radical and innovative research and teaching programmes. These will range from robotics, artificial intelligence and media, to innovative finance, global health leadership, advanced propulsion and sustainable cities.”

“UCL East captures our commitment to creating a diverse, open and accessible site, with spaces for making and advanced manufacturing, object-based learning and conservation, and performances and exhibitions. Our staff will work with, and for, the benefit of local communities.”

The new campus at East Bank is a priority project for UCL’s It’s All Academic fundraising campaign. From fighting dementia to ensuring generations of students reach their full potential: It's All Academic. UCL’s ideas and discoveries are shaping the future, improving lives and having a massive impact on London and the wider world. The Campaign is UCL’s biggest ever philanthropic Campaign aiming to raise £600 million for world-impacting research. By the end of May 2018, it had already raised £394 million.