On 19 July, UCL celebrated the opening of the Interim Hub of the UK Dementia Research Institute. 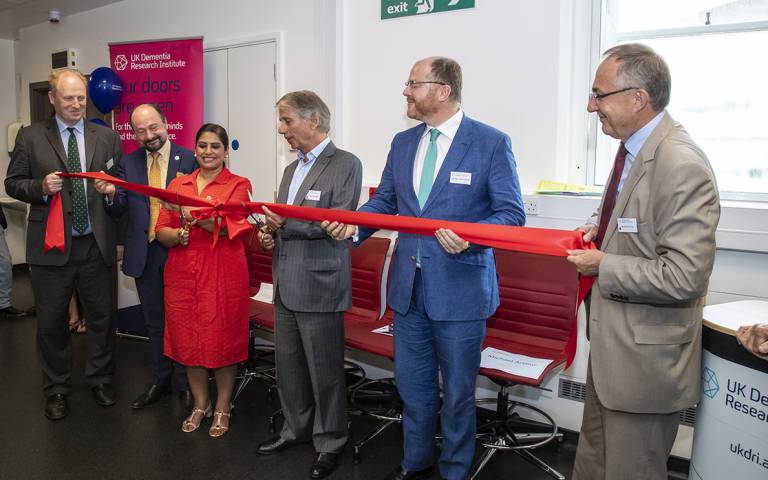 The Interim Hub is based at the extensively refurbished Cruciform Building at the heart of UCL’s Bloomsbury campus. The building will act as the home of the UK DRI until a major new building on the site of the old Eastman Dental Hospital is completed in 2024.

The event welcomed key stakeholders including the founding funders Alzheimer’s Society, Alzheimer’s Research UK and the Medical Research Council, as well as representatives from major donors to neuroscience and dementia research at UCL including the Iceland Foods Charitable Foundation, the Wolfson Foundation and the Rosetrees Trust.

“Opening the interim home of the UK DRI feels like we are on the precipice of something really exciting. These new labs have been designed for the specific needs of the scientists who will work here. I am so delighted that we are able to celebrate today with some of UCL’s closest friends, whose support is helping to build the new home for the UK DRI and the Institute of Neurology.”

Sir Malcolm Walker, Founder of Iceland Foods and Chairman of the Iceland Foods Charitable Foundation who was invited to cut the ribbon and officially open the hub said:

“At Iceland, we have been fundraising for dementia research and raising public awareness of dementia for a number of years, and I am delighted that we are now at this landmark stage of opening the interim hub of the UK Dementia Research Institute. Iceland has been involved in the concept of creating this institute since its inception and we are very proud to have contributed £10 million towards dementia research at UCL ourselves, and help raise £20 million as part of the unique Dementia Research Retail Coalition. This is a cause immensely close to my own heart, and those of my customers and colleagues. There is hardly a family in the country that has not been affected by dementia and the opening of the Interim Hub of the UK DRI is the first major step in fighting for a future in which no life is blighted by this devastating disease.”