As Bentham celebrates his 270th birthday the philosopher continues to be a source of interest and discussion.

But the question of what to get a 270-year-old has been answered as UCL has enabled Bentham to achieve in death what he always wanted to do in life: visit America.

For the first time since the philosopher’s death more than 180 years ago, his auto-icon – comprising his skeleton, wax head, clothes, hat, chair and walking stick – will leave UCL and be transported to the US to go on display at the Met Breuer Museum in New York from March to July. 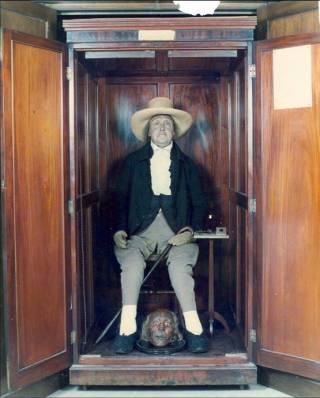 Bentham will form the centrepiece to an exhibition entitled, “Life Like: Sculpture, Color and the Body”, which will bring together classic sculptures and modern pieces by artists from Donatello, El Greco, Auguste Rodin and Edgar Degas to Louise Bourgeois, Jeff Koons and Yinka Shonibare.

It was always Bentham’s ambition to go to America but one he never achieved. Before his death on June 6 1832, however, he laid down in his will the terms of his continued “life” as an auto-icon, allegedly carrying around in his pocket at the end of his life the glass eyes to be used after he died.

The philosopher might be travelling in a crate but he will definitely arrive in first class condition, and has undergone a full inspection and spring clean prior to his departure which has revealed some of his secrets. Jayne Dunn, who as Head of Collections Management at UCL masterminded the operation, said: “There are two central support rods which run down either side of the spine that hold the skeleton together. All the limbs hang from that central armature. Each bone is tied to the next bone by a complicated steel net and pins. All of it was done by the original people after his death.

“He is wearing the original underwear (which has not got infested) and two sets of stockings, one over the other. That might have been the fashion then. Over the top he has a vest which is the original.”

The final preparations for his departure will begin on 2 March when he comes off display at UCL. He will then travel to New York and be prepared for the exhibition at the Met Breuer Museum which opens on 20 March.

The last loan of any part of the auto-icon was in the 1990s when the wax head went to Germany. Bentham had originally hoped his head would be retained on his body but the preserving process, when it was suspended over sulphuric acid to melt the brain, resulted in grotesque discolouration of the face.

It is wonderful to know that Bentham has finally achieved his desire of travelling to America.  If you are travelling to New York or live there then this sounds like a fascinating exhibition to visit.

Find out more about the exhibition here: https://www.metmuseum.org/exhibitions/listings/2018/like-life