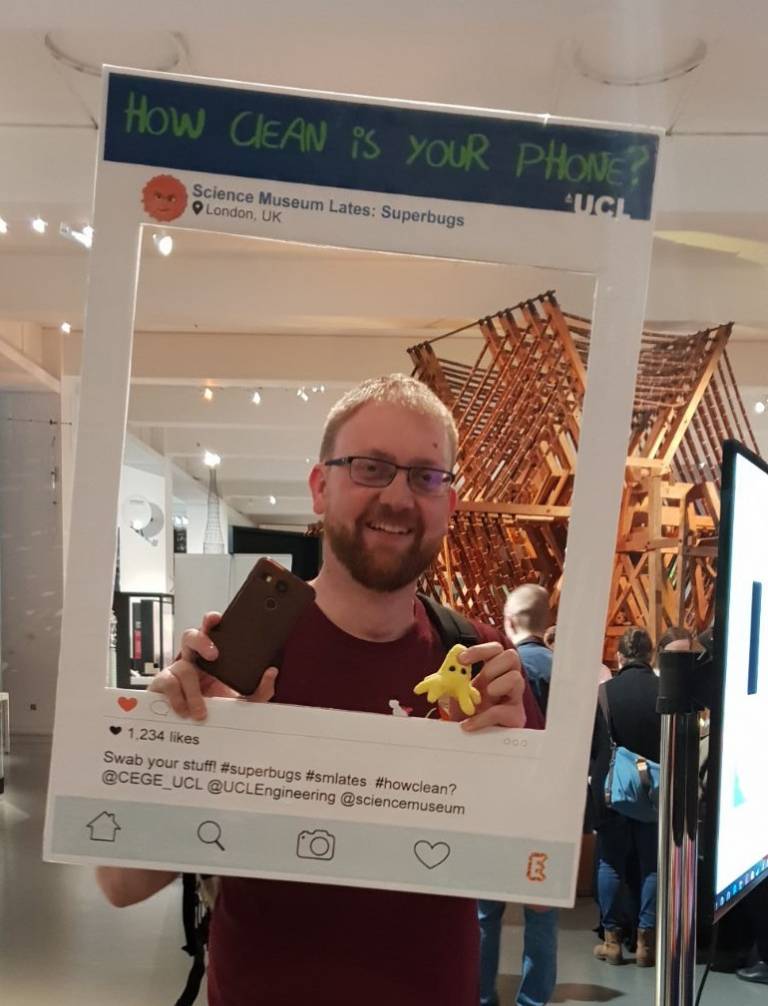 Find out how clean your phone really is and take part in a range of talks, tours, workshops and hands-on activities at It's All Academic - a free festival at UCL for all ges and interests taking place throughout the day on Saturday 15 September.

Currently in the UK, there are an estimated 48.52 million smartphone users, with this figure set to increase to 53.96 million by 2022. That’s a lot of swiping, tapping and texting. But did you know there’s a whole world living on your screen, your speakers and even on your fancy designer case? And it travels with you wherever you go.

Microbes and mobiles – oh my!

“I’ve always been obsessed with the idea that there’s this whole other world we can’t see,” says microbiologist Dr Lena Ciric. “It’s the beauty of the invisible.”

In her job, Dr Ciric studies communities of microbes which live in indoor spaces, developing ways to eradicate the types which make us seriously ill. Her research mainly focuses on environments such as hospital surfaces, but to get us all to start thinking about the existence of microbes in our day-to-day lives, she’s now looking at our phones.

“At some point, we’d all probably admit to being too attached to our phones,” she says. “And because they’re so personal to us, often they become an extension to our own bodies. We don’t just travel with them, we live with them.”

So now, Dr Ciric and a crack team of micro-obsessives are exploring how mobile phones might affect our exposure to microbes – and in the process, they’ve been discovering just how disgusting our mobile devices can get.

“Let’s take nipping on the tube as an example,” says Dr Ciric, “you get home after a long, sweaty, dirty day travelling on the underground, and you wash your hands. But during that journey, you flicked through last night’s photos, started an awkward message and handled your phone in multiple other ways. Did you think to clean your phone when you got home? Nope.”

In a recent Super Bugs Lates event at the Science Museum, Dr Ciric and her team invited the public to have their phones swabbed to see just how many invisible friends were calling their phones ‘home’.

“We were testing the phones for a microbial activity score,” she explains. “This means the number of microbes currently active on the phone. We didn’t have the raw data of day-to-day objects so we were comparing against a sterile environment, like a surgical theatre. We then logged and updated this data in real time to show the rest of the crowd.”

Despite – or perhaps because of – its slightly icky subject matter, the experiment proved a huge hit with the event crowd. Even Dr Ciric was surprised by the response: “People queued for half an hour to see how disgusting their phones were. And we gave out prizes for those with the highest score. Essentially, we all just love getting grossed out!”

What we know so far…

From a health perspective, the most common bacteria our phones carry are those which also live on our hands, such as Streptococcus, Staphylococcus, and Corynebacterium.

But as the world becomes even more connected, our phones can pick up microbes from foreign objects outside of our immediate environment. Dr Ciric adds: “Every single thing we touch with our hands also gets transferred to our phone. So if you’re using your phone while you’re in the loo, on a plane or out and about, those microbes are on your phone too.“

Every time we travel abroad, we also expose our phones to new microbes, which may travel as uninvited hitchhikers when we’re back in the UK.

What about cleaning your phone?

“There’s no hard and fast rule about making sure your phone is clean,” says Dr Ciric. “But I’d just say to remember that wherever your hands have been, that is now on your phone.”

Dr Ciric recommends keeping your mobile out of the bathroom and the kitchen – particularly if you’re preparing food. And when we’re in flu season, it’s worth considering where your phone has been. Viruses that can cause flu can survive on hard surfaces for up to 24 hours so even if you’ve used plenty of anti-bacterial gel on your hands, remember there will still be microbes sticking to your phone.

Despite our lack of phone cleanliness, you don’t need to panic – it’s not yet been proven that the microbes on our mobiles phones are directly making us sicker. “There’s no evidence – as of yet – to support that possibility,” says Dr Ciric. “But what is happening is that because we don’t clean our phones as often as our hands, we are being exposed to those microbes for longer and on a more regular basis. So if you have the flu virus on your phone, you may be exposing yourself repeatedly.”

Discover how disgusting YOUR phone is

Armed with their swabs, Dr Ciric and her team will be at UCL’s It’s All Academic Festival on Saturday 15th September from 10am to 5pm.

Now is your chance to find out exactly what’s living on your phone. Compare your results against others and challenge your friends and family to see who wins the ‘dirty trophy’.

If you’re feeling brave, don’t forget to post your findings on social media using #ItsAllAcademic – we’ll share your thoughts on the invisible world living on your phone.