A first in-human trial for a new drug to slow the progression of Huntington’s disease has been hailed as ‘enormously significant’. 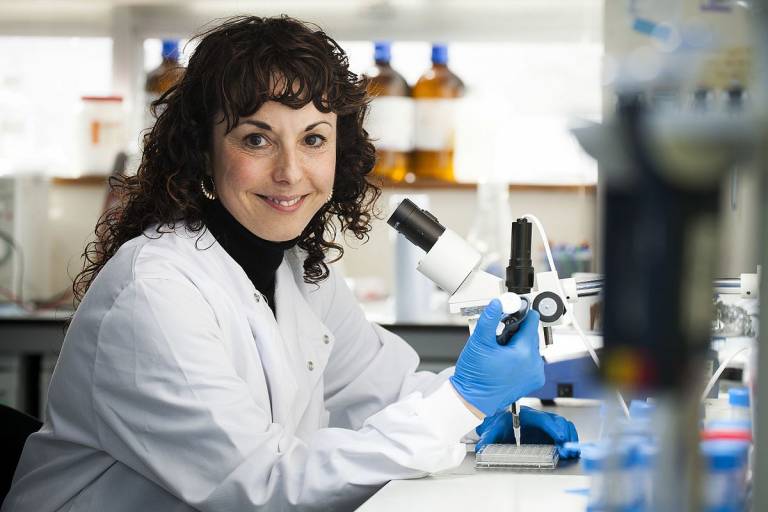 The trial was carried out at the Leonard Wolfson Experimental Neurology Centre at the National Hospital for Neurology and Neurosurgery in Queen Square, and was led by Professor Sarah Tabrizi (Director of the UCL Huntington’s Disease Centre, UCL Institute of Neurology).

The trial, which began in 2015 and is sponsored by Ionis Pharmaceuticals, is the first to show a drug suppressing the effects of Huntington’s genetic mutation.

Huntington's is caused by an error in a section of DNA called the huntingtin gene and most patients will die within 10-20 years following the onset of symptoms. The trial of the new drug IONIS-HTTRx involved 46 men and women with early stage Huntington’s disease.  The drug­ produced significant, dose-dependent lowering of the level of mutant huntingtin and will be taken forward for wider trials.

The trial involved patients having the drug injected into the fluid that bathes the brain and spinal cord. The procedure took place at the Leonard Wolfson Experimental Neurology Centre at UCL. The Leonard Wolfson Experimental Neurology Centre was made possible by a £20 million award from the Wolfson Foundation in 2012, the largest ever made by the Foundation. The Leonard Wolfson Experimental Neurology Centre is the UK’s only clinical research facility dedicated to experimental medicine in neurodegeneration and brings together basic research, clinical research, and doctoral training focused on understanding and disrupting diseases including Alzheimer’s, motor neurone disease and Huntington’s disease. Based at the heart of the National Hospital for Neurology and Neurosurgery, the centre reflects UCL’s focus on bringing together clinical and scientific excellence.

“The results of this trial are of ground-breaking importance for Huntington’s disease patients and families. For the first time a drug has lowered the level of the toxic disease-causing protein in the nervous system, and the drug was safe and well-tolerated. The key now is to move quickly to a larger trial to test whether the drug slows disease progression.”

Prof John Hardy, who was not involved in the research, but was the first UK winner of the Breakthrough Prize for his work on Alzheimer’s says that this approach might be possible in other neurodegenerative diseases that feature the build-up of toxic proteins in the brain.

He said: "I really think this is, potentially, the biggest breakthrough in neurodegenerative disease in the past 50 years."

Philanthropy is at the heart of the transformational work taking place at UCL. In September 2016, UCL launched its largest philanthropic fundraising Campaign; It’s All Academic. Since the Campaign was officially launched, its total has reached £352 million – over half way towards its target of £600 million. In December 2016, UCL’s excellence in neuroscience research was recognised when it was announced that UCL will be the hub of the UK Dementia Research Institute.