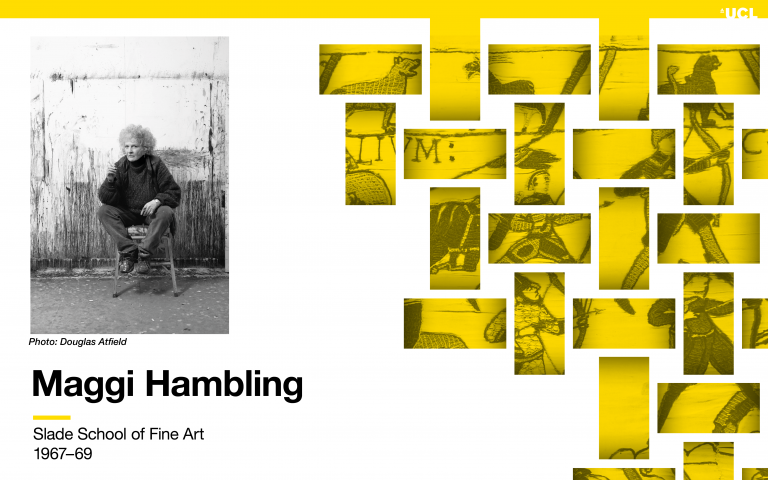 Maggi Hambling (born 1945 in Suffolk) studied with Lett Haines and Cedric Morris, and then at the Ipswich, Camberwell and The Slade School of Art. In 1980 she became the First Artist in Residence at the National Gallery, London, and in 1995 won the Jerwood Painting Prize (with Patrick Caulfield). In 1998 her sculpture A conversation with Oscar Wilde was unveiled at Adelaide Street, London, facing Charing Cross Station. In 2003 Scallop, a sculpture to celebrate Benjamin Britten, was unveiled in Aldeburgh, Suffolk, which in 2005 was awarded the Marsh Award for Excellence in Public Sculpture.

Solo museum exhibitions include Maggi Hambling (Serpentine Gallery, London, 1987); An Eye Through a Decade (Yale Center for British Art, Newhaven, Connecticut, 1991); A Matter of Life and Death (Yorkshire Sculpture Park, 1997); George Always (The Walker Art Gallery, Liverpool, 2009); Maggi Hambling – The Wave (the Fitzwilliam, Cambridge, 2010); War Requiem (Installation, SNAP 2013 purchased for Aldeburgh Music by the Monument Trust); Wall of Water (The Hermitage, St Petersburg, USSR, 2013); Walls of Water (National Gallery, London, 2014); War Requiem & Aftermath (Somerset House, London, 2015); and Touch (British Museum, 2016/17). In 2019, her work is exhibited in For beauty is nothing but the beginning of terror: Maggi Hambling at the Central Academy of Fine Art Museum (CAFAM), Beijing, and the Guangdong Museum of Art in China.

In her own words

For an art student, ’60s London was nothing but a feat of freedom. How bloody lucky we were – unlike the indecency of today, we had grants. And Carnaby Street, Andy Warhol, Dusty Springfield, The Gateways Club, Derek Jarman, et al …

Under Robert Medley at Camberwell (1964–67), which for me preceded the Slade (1967–69), ‘gay’ was most certainly ‘the word’. Under William Coldstream, the Slade was a highly civilised place where naturally ‘anything went’. And it did.

Interviewed in the late ’90s, when asked if it had been difficult to ‘come out’? I replied, somewhat taken aback, that I had never been ‘in’.