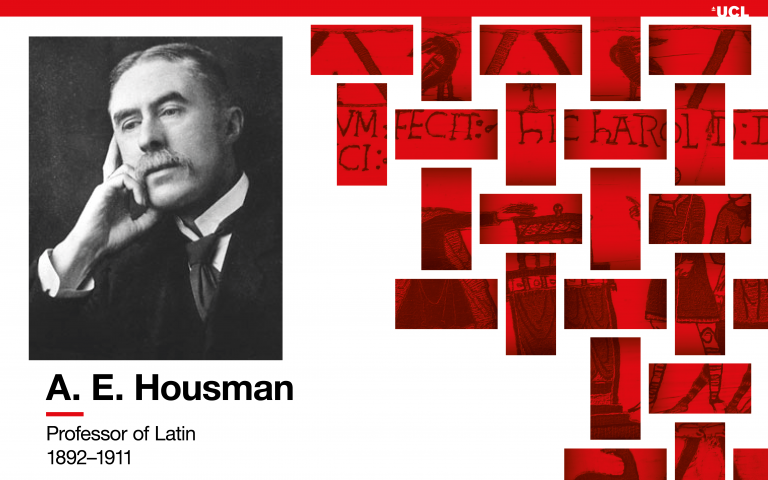 Alfred Edward Housman (1859–1936), known as A. E. Housman, was a poet and classicist who is best known for the poetry collection A Shropshire Lad.

In 1877 Housman won a scholarship to study Classics at Oxford, where he struck up an intimate friendship with fellow student Moses Jackson. Although Housman failed his final exams at Oxford (attributed by some to his unrequited affection for Jackson), over the next ten years he developed a reputation through private scholarship as one of the leading Latinists in the English-speaking world, specializing in ancient poetry. In 1892 Housman was appointed to the professorship of Latin at UCL, a position he held for nineteen years.

During his time at UCL, Housman earned a reputation as a skilled poet in his own right, publishing his best-known work, A Shropshire Lad, in 1896. Poems in this collection struck a particular chord with young British men who fought in the First World War.

Officially Housman’s final published work of poetry was Last Poems (1922), but after his death in 1936 other selections were published under the editorship of his brother, Laurence. In 1942 Laurence also deposited the essay ‘A.E. Housman’s De Amicitia’ in the British Museum, stipulating that it not be published for twenty-five years. Laurence’s essay, which finally became available in 1967 – significantly the year when homosexual acts were partially decriminalised in Britain – discusses his brother’s homosexuality openly, focusing especially on Housman’s attachment to Moses Jackson.

Although the poems published in Housman’s lifetime only made coded references to homosexual themes, some contemporary readers sensed an affinity. Significantly when Oscar Wilde’s friend Robert Ross visited Wilde in prison, he recited verses from A Shropshire Lad that he had committed to memory. And when Wilde was released from prison in 1897, Housman reputedly sent him a signed copy.

But homosexual themes assume particular significance in the collections of poetry published posthumously by Housman’s brother Laurence. Notably a selection collated in Laurence’s 1937 memoir My Brother, A. E. Housman includes a poem entitled ‘Oh who is that young sinner,’ written in aftermath of Oscar Wilde’s conviction for gross indecency in 1895. Repeated references in this poem to the colour of the subject’s hair are a coded reference to Wilde’s sexuality, which was deemed ‘unnatural’. The description of the sinner’s hair colour as ‘nameless and abominable’ further alludes to the legal proscription of homosexuality at the time as the ‘love that dare not speak its name’.

Housman’s own name is remembered at UCL today in the guise of its Academic Staff Common Room, dedicated in his memory as the Housman Room – a fitting tribute to a man who made his own significant contribution to efforts to bringing supposedly unspeakable passions into the domain of literature and scholarship.