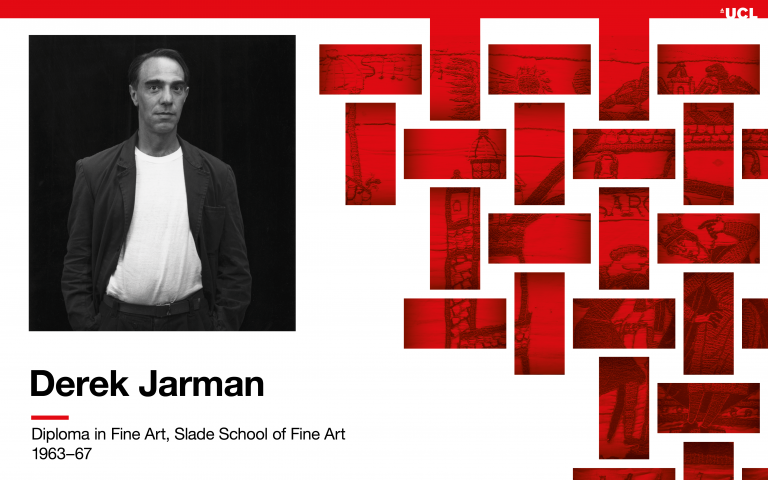 Derek Jarman (1942–94) studied painting and stage design at The Slade School of Fine Art at UCL between 1963 and 1967. In the early ’60s, while taking an academic degree at King’s College London, Jarman also regularly attended life drawing classes at The Slade.

In Jarman’s memoir Dancing Ledge, he recalls spending increasing amounts of time in The Slade’s Theatre Design room ‘where there were sympathetic spirits’ and where ‘homosexuality was accepted quite openly’. On one occasion, Jarman brought in some muscle mags and collaged them into a set design for Stravinsky’s ballet Orpheus. This caused a minor disagreement with the Slade Professor Sir William Coldstream, ‘who talked about the acceptable limits of art … while standing with his back to my set’.

Jarman further reflected that, at the time, ‘the homophobia of the art schools was mixed with a lot of plain jealousy’. ‘Straight’ painters working in the studios upstairs at The Slade envied the ‘insouciant, happy-go-lucky lifestyle’ of gay members of the art world. ‘But who could blame me if after years of repression I found that homosexuality, far from being a disability as I’d been brought up to believe, led to an easy social mobility and with it incredible advantages?’

During his time at UCL, Jarman took a course on world cinema and a few years later began experimenting with making his own films in the low budget ‘Super 8’ format. Although principally known for his films, Jarman was also a keen painter and poet, writer and memoirist, gardener and activist.

Jarman’s first full-length feature film, Sebastiane (1976), based on the life and death of the early Christian martyr Saint Sebastian, was one of earliest British films to include positive images of sex and intimacy between men. Later features included Caravaggio (1986), a biopic about the eponymous painter whose unorthodox sexuality has been presented as a key to his art and violent life; and Edward II (1991), Jarman’s radical reworking of Christopher Marlowe’s play about a monarch who, in the Middle Ages, acquired a reputation as a sodomite.

Open about his HIV status, Jarman campaigned tirelessly against representations of AIDS in British media in the late 1980s and early ’90s. Several of Jarman’s later films, including Edward II, were informed by his involvement in HIV/AIDS politics. Jarman was also a leading campaigner against Section 28 of the Local Government Act, introduced into British law in 1988, which sought to ban the ‘promotion’ of homosexuality in schools.

Towards the end of his life, Jarman played a central role in reclaiming the term ‘queer’, seeing it as a possible alternative to rigid labels and categories of sexual and gender identity. As he put it in another of his published diaries, ‘For me to use the word “queer” is a liberation; it was a word that frightened me, but no longer’.