How property consultant Tres Seippel is connecting UCL alumni across the US. 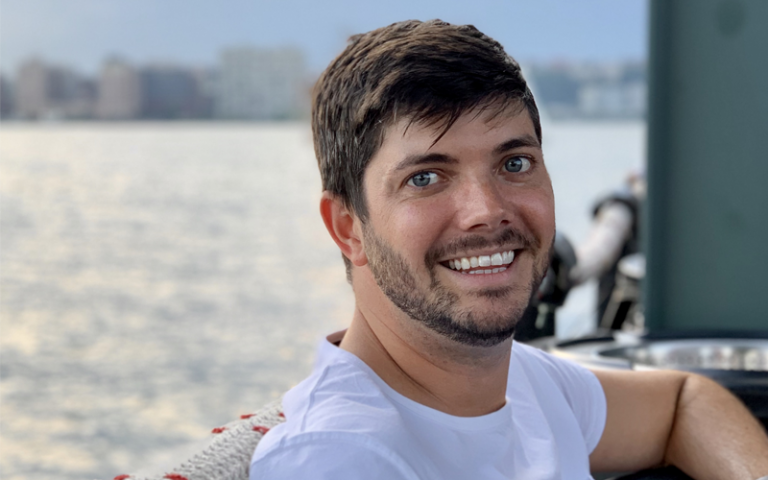 In the summer of 2014, Tres Seippel attended a small picnic in New York’s Central Park, organised by two fellow UCL alumni, Leonor and Amanda. A new UCL New York Alumni Club was being born. But at the time, Tres had no idea that he would end up chairing it, that it would grow into a rich community of hundreds of people, and that its achievements would lead to him being asked to help grow UCL alumni groups all over the USA.

So what’s the secret of the group’s success? “Keeping it casual,” says Tres. “Some of our best nights are just in the pub!”

Tres actually only spent one year at UCL – taking his master’s in International Real Estate and Planning at the Bartlett School of Planning from 2011-12. But that year was hugely significant in his personal journey.

Having studied Landscape Architecture and Environmental Science at undergraduate level in the US, with a year in Prague, Tres headed for London. “UCL has a great research background and would allow me to explore the things I was interested in. It also has a world-class name, world-class teachers and would give me the chance to meet people from across the globe.”

Tres says he made many lifelong friends at UCL and the multicultural nature of his cohort was hugely important to him. “You can get a good quality education at most universities,” he says. “But at UCL, making connections with people who are really different to you - for someone from a small town in North Carolina, that was a life-changing experience.”

While at UCL, Tres also learnt the value of volunteering – giving his time to a planning project in Hackbridge, south-west London through UCL Just Space, as well as participating in a survey of the green credentials of UCL’s buildings.

Having graduated from UCL, Tres worked for a time in Washington DC, and then moved to New York, where he now works at Genesis Capital, a subsidiary of Goldman Sachs, assessing residential development projects across the US to identify and minimise potential risks. “I am driven by the idea of creating something,” he says. “When I walk around New York City and see the 30 or 40 buildings I’ve worked on here - that feeling is really nice.”

But while his career was taking off, Tres didn’t want to lose his link to the UCL community. Hence his attendance at that fateful alumni picnic. “New York is a big city and it can be hard to make connections. The New York Alumni Club brings seemingly random people together, but we all have one thing in common - UCL - and that gives us plenty to talk about. It’s a way to have an instant connection with total strangers.”

The club’s events vary in scale from panel discussions to art tours, an annual summer picnic, boat cruises and the aforementioned pub nights, but Tres says keeping things fun and mostly informal is always important. “We don’t want people to feel like they’re at business networking events,” he says. “This club is a grassroots venture really, we try not to take it too seriously, except for when we put on bigger events with the help of the university, and when we have our annual visit from the Provost.”

Now, Tres serves on the Board of Directors for the UCL Friends & Alumni Association, a US non-profit raising awareness and philanthropic support for UCL’s work and facilitating scholarship opportunities. “My first task has been talking to alumni leaders in other cities about how we grew our club,” he says. “We are creating a network to share ideas and talk about our events. We’re also looking at doing a day of giving, where we all use the same day of the year to volunteer in our communities.”

Clearly motivated and ambitious, Tres is turning heads both in his industry and through the UCL network. Asked about his career aspirations, he’s clear: “Being a property developer in my own right will always be my end goal. But I also just want to create things that last. And things that make a change in big cities and small towns across America.”

In a different way, Tres is already making positive changes in many cities with his volunteering. And it certainly seems that his New York Alumni Club is very much built to last.